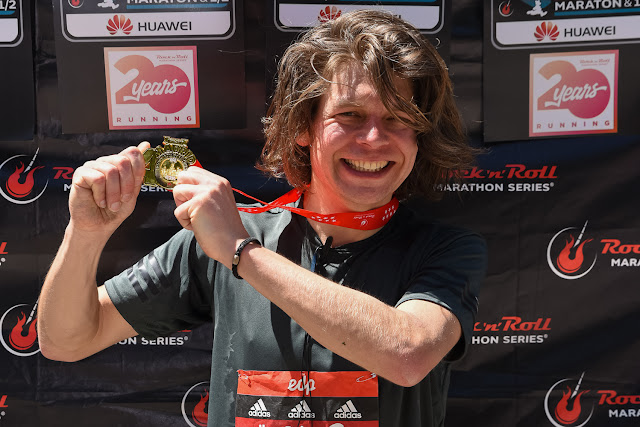 I know it's rude to spoil the ending, but I did it! I actually did it! I ran the marathon! :)
Jaysus, it wasn't easy. A magpie crossed my path on my way to the metro. I thought if there was ever a time to prove superstition wrong this was it. To be honest I wasn't very confident of finishing. I was dreading it. 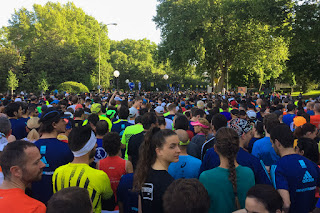 But people's enthusiasm is infectious. Other runners got on the metro in shorts. They seemed chirpy despite the cold and the inhumane earliness for a Sunday. For any day.
There was music blaring, The Smiths, The Cure, good stuff, and someone shouting stuff over the speakers. Encouragement, I suppose. 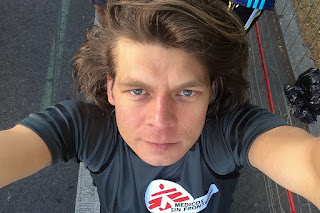 We set off, and the biggest initial difficulty was people getting in my way. We set off at what I thought was a slow clip. I was in the 5-hour corral, soon caught up with the 4.5-hour corral, but then I lost all the balloons and figured I'd just keep running.
I wanted to take pictures and tweet along the way but that idea was quickly scrapped. I took a picture of the Santiago Bernabéu but there were a load of trees in the way and I wasn't going to run off to find a better angle. So I skipped the photos. 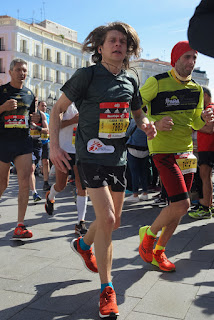 The left leg was fine starting but it started complaining again after about 10K. The right knee was fine throughout, amazingly, ironically, though perhaps only in comparison to the left, which got steadily worse. I was limping badly by 16K.
A guy beside me asked me if I was alright. Turns out he was from Dublin. An old injury, I told him. Where did I start? We had a bit of a chat and he went on, said I'd probably overtake him later on. I knew I wouldn't.
But people were clapping us, and cheering. ¡Animo! ¡Animo! Friendly faces, smiles, encouragement.
There was a balloon ahead with Nacho written on it. When I got there it was attached to a wheelchair occupied by a handicapped kid being pushed by a team of supporters. The crowd saw him and chanted "¡Nachooo! ¡Nachooo! ¡Nachooo!" and all the runners likewise, "¡Nachooo! ¡Nachooo! ¡Nachooo!"
I Nachoed too as I limped alongside them. It was great. The level of goodwill. I got goose-bumps. Nacho and his entourage would overtake me before the end. 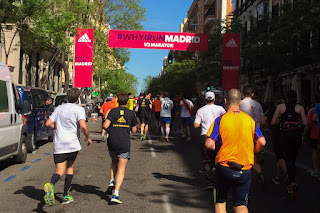 I thought I had to get to the halfway mark at least, that that was a decent mark to aim for, and I'd call it quits then. I finally got there, it was awful, I had to stop. People were running past. I was gutted, even though I knew this was always on the cards. I sent a tweet and said I'd go on. Even a kilometer or two, anything.
Walking was more painful than running so I ran. Or tried to. I dunno if you can call it running. Someone on rollerblades sprayed some muscle-spray on my left leg. I kept going.
I knew the young fella and my mother were waiting to cheer me on at Lago, at the 29K-mark, so I thought I'd aim for them and then at least I could go home with them.
Well, it was horrible, I just kept going. You could grab water and stuff at various points as you ran. I grabbed it, sipped it, threw it over my head. 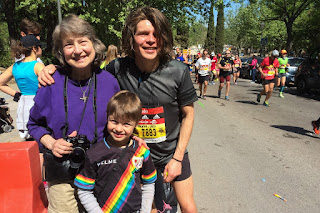 I was never so happy to see my family when I finally saw them. Damn, the relief! I hugged them, kissed the young fella, drank water, took pictures, they took pictures, then a neighbor asked if she could take a picture for us. So she did.
I must have been five minutes there, maybe longer. I felt better. I thought, sure I might as well go on. There were only five kilometers to go to match the furthest I'd ever run in one go before. So I said I'd keep going. 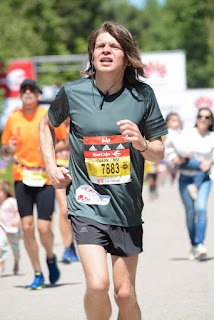 I got to 32K, 33K, past Atlético Madrid's stadium, clocked 34K and I really felt like shit. This was it! I was now running further than I ever managed before. Cramps stopped me at this stage before but they weren't as bad, I could still move my legs, even if I was limping ridiculously like a three-legged crab.
So I kept going, I kept going. I thought, fuck it, I have to keep going. There were stages I had to stop. I had to stretch, somehow stretch the calves, get them to cooperate. The knee was gone, I knew there was nothing to be done for that, but if I could get those calves to play along… 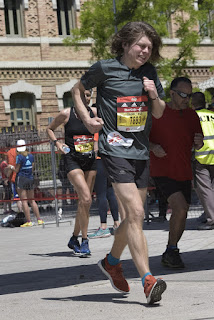 There was only four kilometers left. Only 4K! Nothing. Not even a run down to Humbolthain and back. So fucking close. But damn they were the worst four kilometers in the world. Every Single Meter Was Hell. Or close to it. I remembered why I was running throughout and that lent the pain a certain perspective. It didn't alleviate it, though.
I had to stop a couple of times. I walked a bit. The shame. Other runners ran past. ¡Animo! ¡Animo! You can do it, you're nearly there! I grimaced apologetically. It was so close, so damn close! Spectators were urging me on. They called me a campéon. Another rollerblader stopped and sprayed more stuff on my legs. I ran again, I ran, I ran till I saw the finishing line and that kept me going – till I reached it and saw there was another bit to go, it was only some advertising banners. The fuckers, I thought. I was begging for that line. 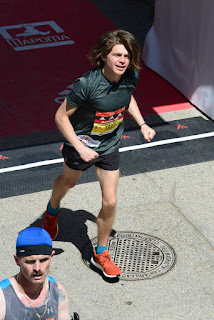 I finally crossed the line, one with a timer on it. The finishing line! I did it! I nearly cried. I'd run the damned marathon.
"¡Enhorabuena!" someone said. Someone else gave me a drink. Someone else put a medal around my neck, more congratulations. Someone else gave me a bag of stuff. Others were handing me bananas.
"I already have a banana."
"Have some more. You gotta eat bananas! Platanos, platanos!"
So I took some platanos and headed straight for the physiotherapy tent. My legs were in agony. There was a queue. I couldn't stand. I had to queue sitting, lying down – no matter what I did the pain wouldn't go away. 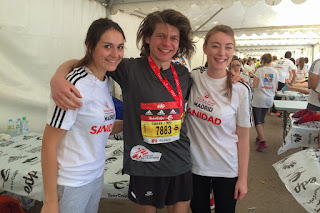 Finally my turn came. The physiotherapists were great – as soon as they started I felt better. They used ice and massaged my legs. It was a miracle, I felt a thousand times better. They told me to stretch again once the muscles loosened up.
It took a while to get home. Walking wasn't easy and metro steps were a new unforeseen torture. The young fella came down to greet me when I rang the bell, wanted to know if I did it. I high-fived him. "Yep!" I was so happy, I'd finally done it!
He was happy too. He was impressed – or so I thought till he asked what took me so long. Then he wanted to play football. Needless to say, I wasn't much good. 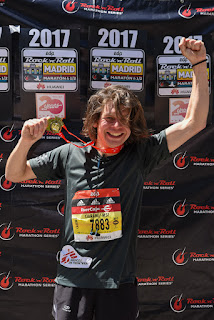 My phone tells me I ran more than a marathon, 43.28 kilometers in 4 hours, 37 minutes. Altogether, training included, I ran 1,826.37 kilometers.
It was all to fundraise for medical aid and supplies for Syria via MSF. We've raised a good bit so far – a trillion thanks to everyone who has donated already! – but of course the more donations the more lives we'll save, the more suffering we'll alleviate.

UPDATE: Friday, May 12, 2017 – I just transferred €700 to MSF Ireland, earmarked for the Syria campaign. That brings it to €2,700 altogether. We raised €2,700! We did it!
I can't thank people enough. Thank you, thank you, thank you – I'll be eternally grateful. And I know the people it helps will be so grateful too. Thanks!!
Labels: mad shit marathon MSF Syria