Whack whack whack and the sound of glass smashing without end 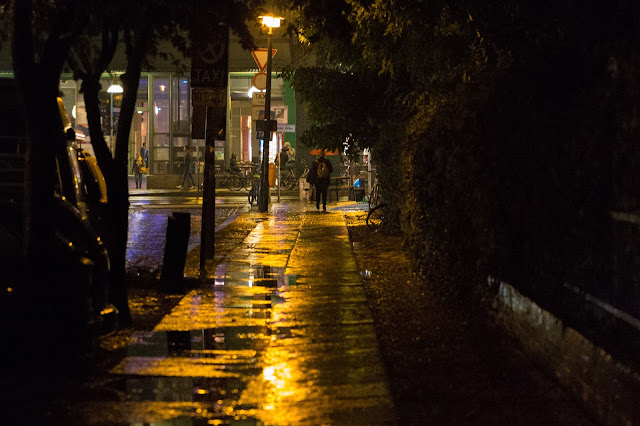 In a café with a friend for some reason, I explained how I suddenly recognized the street (Stargarder Straße) because it was the setting for a TV show where the students went to school on one side (the Hokey Pokey side) and hung out in an ice-cream joint (not Hokey Pokey) on the other.
The café was all tables and chairs set back in rows and we were watching a film about something. No idea what. The guy sitting in front put his arm up to scratch his head or stretch and someone behind started complaining, can’t see the film, get your fucking arm down you asshole.
The guy got up and ran behind me and all I could hear were thumps, the soft repetitive thuds of bone-driven flesh on flesh. I tried look, get up, stop it, but my friend had grabbed my head in a lock and I couldn’t move. I struggled and strained against his arm but nothing. My eyes were covered, I couldn’t see a thing. Maybe he was trying to protect me in my post-crash condition. The thumping continued, I could hear it, whack whack whack, voices of complaint rising steadily from other café guests. Whack whack whack and the sound of glass smashing without end. I freed my head and woke up. These antibiotics are fucking strong.
Yesterday it occurred to me it’s easier to fill a hole with a body than sand. You just tip it in, cover it up, done. Less shoveling. But you have to find a body, or make one, which is work in itself. Then you’ve to carry it to the hole. And there’s the guilt involved, weighing you down. More work in the end. It’s better just to fill the hole with sand, shovel by shovel. Shortcuts are deceptive.
Nothing has a beginning and nothing has an end. Time passes but it never forgets. The past eats the present and the future is inside us.
To avoid going crazy you got to do crazy things. I booked flights for Cuba, went for a walk in the rain, took photos on a tripod in the dark, brought the camera home, dried it with the towel.
It’s European Month of Photography. Art will save us all.
Labels: art dreams Life mad shit