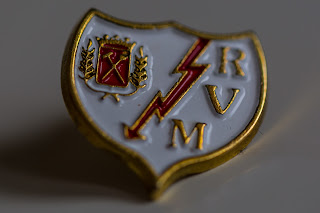 Rayo were relegated from La Liga yesterday. I know it shouldn't matter, it's only football, but somehow it does. They won't be measuring themselves against Real Madrid, Barcelona or Atlético next season. They probably won't be coming to Neuruppin to play Hertha again in the summer. Five seasons in the top flight they lasted – the longest spell for the club.
Despite their precarious position yesterday I still had hope they'd escape by the skin of their teeth on the last day. They had done it before. They just needed to beat Levante and hope neither Getafe nor Sporting Gijon won their games. They fulfilled their side of the bargain but Gijon didn't play ball, or rather they did, clinching survival instead by beating Villarreal.
There were tears all round – Paco Jémez just stood there as they rolled down his face. But Rayo go to La Segunda with their heads held high. After worst fears were realized, supporters cheered and waved their flags as if they'd won. Vallecas is a proud neighborhood. Este barrio nunca se rinde.
I'd feared for Rayo's well being at the start of the season when it seemed all the concentration wasn't on football. There was the business with the jerseys for every cause with donations to charity (a noble idea tainted by the whiff of marketing), the club finally sorted out the shop on its website, and the owner went off and invested in an American club, Rayo Oklahoma, a ridiculous move betraying notions of grandeur. Rayo is not Real Madrid.
In a way it was as if the club forgot its roots, forgot its neighborhood, forgot its fans and temporarily forgot about the football. It's still the world's best little club but now the world's best little club plays in the second division. Maybe it's a good thing after all, for Rayo to be brought back down to earth. They'll be back, stronger than ever.