People were very angry in Munich today – the Münchkins that is. Someone took a swing at me as I was running earlier. Just brushed me with his fist as I went past. He kept his head down and looked like a nutter so I just kept running. 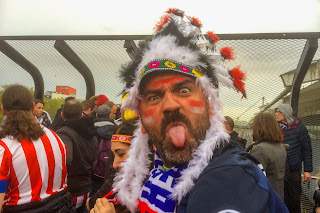 Tonight, coming back from the game, there was a row on the train because some clown wouldn't put out the cigarette he lit. He and his buddy were mouthing off to another guy who asked them to put it out until another guy got up and told him to his face. The smoker tried head-butting him and there was a bit of a struggle and lots of name-calling. It was embarrassing really. But it was all sorted in the end.
When I got off the train another fella was shouting and roaring outside a bar or a restaurant. Two men were fighting and one of them was throwing stuff back toward the restaurant – his glass or something. I dunno, I didn't care, fucking idiots.
Bayern lost! Well, they won but they really lost so maybe that's why they were all drunk and bad-tempered. They're gloomy when they win so I guess losing is a catastrophic disaster for them. They're spoilt, the Münchkins.
Earlier I was thinking the show of wealth I could see everywhere was sickening – all the fancy cars genuinely made me feel ill, thinking of all the arms deals they'd concluded to buy them, all the people somewhere else that they're screwing over – but if they're not happy they're not rich at all. They know nothing.
I wore my Rayo top when I was running – 10K up to the English Garden and back – and every time I passed some Atlético fans they cheered and whooped. RAYOOO!!! I felt like a star, shouted back Aúpa Atleti and kept running. It's to raise money for MSF and Syria in case you didn't know. 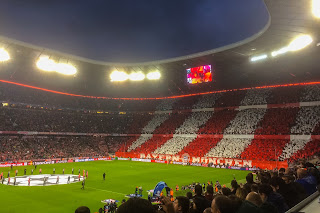 I wore my Atleti top to the match but I don't think anyone noticed, they were all too focused on the game. Jaysus, what a game! Ein Krimi, as my neighbor from L'Équipe said.
I dared not write the lede until very late, and even then I was sure I'd have to write it again. Thankfully I didn't, but when they said five minutes of injury time, goddamn. The tension, the drama, the unlikeliness of it all!
I hope Atleti go all the way now. They've got a good chance. Every side to have knocked Bayern out since 2012 has gone on to win it. It's something to look forward to in any case. Sport is a great distraction from the real world, where some people get angry for no reason at all.
Labels: AP Atleti Fußball marathon Munich work