The shit they build in Berlin 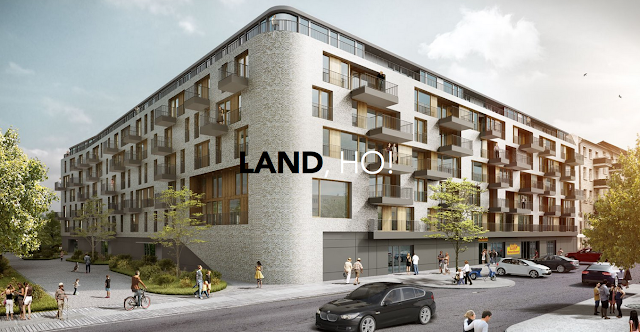 This is the shit they’re building in Berlin now. “Das Gotland” – a development of 136 luxury apartments for sale at a price starting at €3,950 per square meter, presumably rising to much more, totally out of keeping with the rest of the buildings on the street.
There was a wine reception today attended by people in suits being served by waiters. A tent was set up for the purpose. They kicked me out when they saw me taking photos, literally pushed me out the gate. They also tried to stop me taking the photos, putting their hands in front my phone. I wonder what they’re so afraid of. Unfortunately I didn’t have my real camera with me. 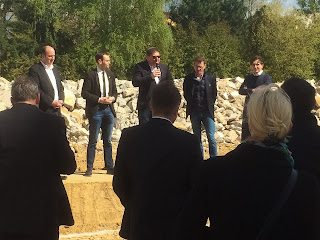 The investors Hubertus Hiller and Harald Wengust, and Stadtrat Torsten Kühne were giving speeches to polite applause on the site where the Netto and Mittelmeer supermarkets stood until recently. They’ve apparently invested 60 million euros. I assume that covers the wine too, and the glossy brochure created by Eckel Presse & PR GmbH, and the huge sign advertising the complex that’s lit up like a Christmas tree every night. As if they were looking for buyers in space.
They might as well be, for they won’t find them in Berlin. It’s telling that you can browse the plans in English. The city doesn’t build for Berliners, hasn’t done so for a long time, despite all the crap spewed by politicians itching to build on Mauerpark and Tempelhof.
They’ve already started with the construction at Mauerpark, and they’re doing their best to undo the referendum on Tempelhof. Meanwhile the building previously home to White Trash Fast Food is still empty, years after they moved out, while the owner waits on the assumption some idiot will come along sometime to pay the increased rent. The luxury apartments at Cantianstraße/Schönhauser Allee (the ones that covered over the mural of the bear kicking a football) are mostly empty too. No one can afford them.
It’s Berlin’s housing philosophy – create the shortage, then wait to reap the reward. They deserve their polite applause.
Labels: Berlin gentrification shady shit