No bananas: the new refugee crisis 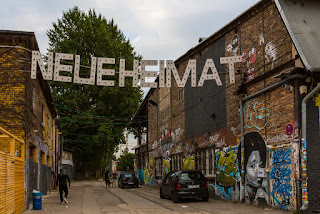 The refugee crisis is over, or least that’s how it seems according to the Berlin authorities. Apparently there’s no need for soldiers or medical staff for the near-daily trains of arrivals at Schönefeld. No need for fruit or any food either, tea and coffee is all they’ll get. Sure why bother at all when there are volunteers who work and provide food and care for free?
That’s how it’s been for the last two weeks. The hall was pretty bare when I got there this morning, lacking in humans and food. Soon though, it was flooded with humans of the refugee-variety, tired, bedraggled, some clearly at the end of their tether. If ever humans needed some sustenance, a goddamn banana or something to keep them going a little longer, but no, the city is cutting back on bananas right now. Presumably the savings can be funneled toward building Germany’s biggest refugee camp on Tempelhof. One banana for every democratic vote it’s defying.
Today’s bunch (refugees, not bananas) were really in a poor state. There seemed to be more kids than anything else and tempers were frayed in a way I hadn’t noticed before. There was a fight between two kids who probably would have killed each other if adults hadn’t intervened. Then the respective parents carried it on, before turning attention to the kids, who got another battering. The crying and moaning and whining was ever present.
I was in charge of the presents, handing out teddies and stuff to whoever wanted them. Unfortunately it was always the same kids who wanted more. So I had to say “no” a few times. I hate that.
An oldish woman asked me if I had a bag to replace her busted backpack. It was torn across the top, wouldn’t close. She was out of luck, there was nothing. She sat down quietly and later I saw her diligently cleaning a Donald Duck cushion she had picked up in the general melee. She was maintaining her dignity through it all.
As they were all leaving she saw me from the queue and waved. I waved back, gave her a thumbs up. She returned the gesture and smiled. No matter how shit things get people can always somehow smile.
Labels: bananas Berlin refugees Syria Train Train of Hope