It’s official! I’m running the Berlin Marathon for Médecins Sans Frontières/Doctors Without Borders in Syria. They know, I know, Paypal know, and I’ve a form to prove it so now you know too. 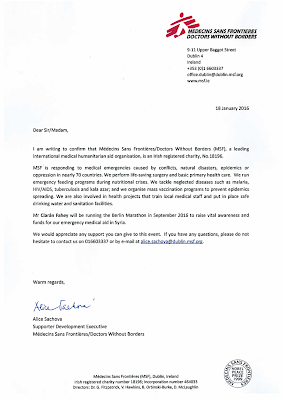 I’m going with MSF because of their incredible work under horrendous conditions where no sane people would normally go. Their hospitals have been repeatedly targeted, their staff and patients killed in conflicts that show no sign of ending, ever.
Syria appears a lost cause. Western governments are not helping, the Russians have even joined in, and the situation’s going from bad to awful to horrific. When you think it can’t possibly get even worse, you’re proven wrong yet again. Cluster bombs, barrel bombs, chemical weapons, systematic starvation: none of them news anymore. But of course it’s not a lost cause, it can’t be.
So I’m going to run my legs off for MSF’s efforts in Syria. So far I’ve run 257.3 kilometers, just over six marathons, albeit none at the same time. There’s been tears, sweat and snot, though no blood yet. I nearly puked going up a hill in snow and ice last Monday and then snotted myself spectacularly on the other side, just as a large group arrived. “Oooooh,” they all exclaimed in a joint burst of Schadenfreude. I kept running. It’s nothing to what Syrians are going through. Everything’s nothing.
So please donate what you can, doesn’t have to be a fortune. So far I’ve raised €90 and I’m doubling that now. So so far I’ve raised €180 for MSF. They’ll get every cent, I’m paying my own expenses.