So much to be done 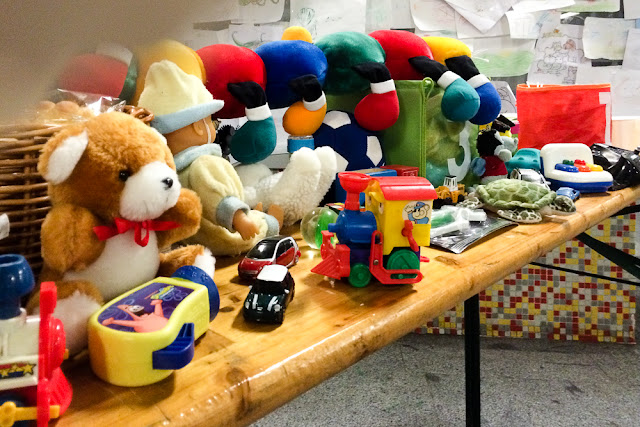 Just 204 refugees arrived this morning, none yesterday and 16 on Saturday. Numbers are dropping off, either because of the deteriorating weather or tightening borders, probably both.
Again most of them had clothes this time, though some were still needed. One baby just had socks, no shoes, and many of the refugees were coughing painful sounding coughs.
There was a lot more stuff for them today than Friday. New toys and teddies were delivered over the weekend and there was a greater selection of grub for them too, including muesli bars, fruit, cakes and the cream cheese sandwiches that we made again. They were laughing at my efforts to say jibneh or jibin for cheese, the only Arabic word I know, or don’t as it turns out.
They were all exhausted. It’s a long nine-hour overnight train trip from Freilassing on the Austrian border and of course they had all been traveling much longer.
One guy I was talking to came across the sea into Greece, then up into Macedonia, Serbia, Hungary and so on. He was on his way to Finland. His companion was on his way to Switzerland. “You know that’s the other way?” I told him but he just smiled so I assume they knew what they were doing.
Then your man asked me which was better to get to, Finland or Switzerland, and I’d no answer for them, I didn’t know. I’m going to have to find out. (Not that I’d encourage anyone to do anything verboten!) But I guess it just shows they’re just following their noses, away from danger, anywhere toward promise.
Some of the kids looked shocked or traumatized. I’m no expert; maybe they were just tired, but they sure as hell didn’t look right.
A woman from Iraq was traveling with three kids, one with some sort of disability. He was a bit of a handful, kept running away, and the poor woman was at the end of her tether. He wanted a hug so I hugged him and then he ran away again.
“I could control him at home but not here, not since we started the journey,” the woman said. She was trying to reach her husband who’s been in Germany since April so we rang him and told him where the family was being taken. “I’ll be there in an hour,” he said.
Speak of the divil, he just rang me. He’s at the camp and can’t find them. I’m on the train back from Schönefeld so there’s not much I can do – unless I go on to Olympiapark where he is. Damn, I hope there’s a happy ending. I just texted him so if he needs me he’ll call again.
I made a few kids smile with teddies, a few adults smile with clothes and food, but still it’s not enough. It’s never enough. There’s so much to be done.

UPDATE – Three hours later. The Iraqi father rang me back. He managed to pick up his family! So they’re all very happy naturally enough. And so am I! A happy outcome!
Labels: refugees Syria Train Train of Hope