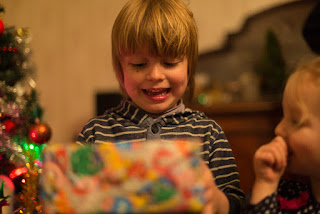 Christmas has come and gone. The relief! First world problems, I know, but as I type the house has no water. The pump broke, the spring quit or the well ran dry despite all the floods. It’s been raining all day, all ever. I have to pee in the garden because we can’t flush the toilets. It’s OK, the driving rain is only mildly uncomfortable and the gale force winds tussle my hair playfully and make me feel at one with nature. I look up and the branches dance above my head, creaking and groaning through the roaring, the gushing wind. I have to be careful which direction I pee in, but the wind’s blowing in every direction. I squelch through the muck on my way back, trip over a rusty wheelbarrow, down an embankment overgrown by thorny brambles, try to avoid being decapitated.
So far this festive season I fixed a flapping window in a storm, been electrocuted by vintage Christmas tree lights, and balanced a ladder on a slippy roof with a brick to sweep the chimney in the rain. The goddamn rain. It was worth it. We had a fire afterward, unlike the night before, spent shivering in bed despite wearing a hat and jumper. My sister told me she had to wear her coat to bed. A fucking coat! It’s a big heavy coat too. She was shivering anyway.
I’ve just fixed the TV, literally, in between typing. The loud constant buzzing was driving me insane, I don’t know how it hasn’t driven my family insane. Maybe it has.
These are but trivial issues, I know, compared to what others are going through. We had food, drink, presents, a tree, even if it’s a fake one. Maybe it’s apt for Christmas to have a fake one. We had a row over the meaning of Christmas even as we tried celebrate what we were arguing over during the so-called Christmas dinner. Spuds, turkey and wine are real, at least we could agree on that. That’s all that matters. 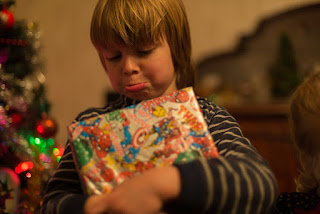 Noddy isn’t here this year, leaving me and Sully to pick up the pieces. Whitechurch sure is quieter these days. We called next door and it was almost like old times, the young fella playing cards instead of Noddy at the table. This is his third Christmas in Whitechurch. He’s bigger now; it’s his first Christmas playing cards.
Whiskey, beer, a gun – he was offered everything but cocaine and he turned everything down but the gun, which he shot with frightening precision at the door before revealing himself as a card shark. Another Christmas has come and gone. The more things change the more they stay the same.
Labels: Christmas Christmas tree Noddy Sully