No matter how many machine guns you have, you cannot flight an unknown enemy you cannot see. The stadium was absolutely stuffed with armed Polizei on Tuesday night, many of them conspicuously displaying their weapons, but you wondered just what the hell they were going to do with them. They probably wondered the same. They’d have to see the enemy before they could use them but by then of course it would already be too late.
For once I didn’t resent the Polizei’s presence. This wasn’t fun for them. Uncertainty was in the air, not fear, but apprehension. Certainly all the sirens, flashing blue lights and machine guns did not create a feeling of security, even if that was all they could ever hope to achieve – a feeling.
In the end it was all for nothing, the game was called off, the bad guys won. Yeah, no one was killed, but that’s just another facet of the uncertainty. We don’t know if there was a real threat. Nobody seemed to know. De Maiziere, who called the game off, wouldn’t give the reasons, but did his best to worry everyone by saying the reasons would worry everyone. The bad guys must be delighted. This is exactly what they want.
Now there are concerns about the weekend’s Bundesliga matches, every train journey, concert and large gathering. Christmas markets will lose some of their cheer, perhaps business won’t be so brisk. But what to do?
If an army of police armed with machine guns can’t ensure a football game can go ahead without the fear of people being killed or injured – despite searching every single person entering (media too, a sniffer dog examined my bag) – then what hope have people they can be safe elsewhere? 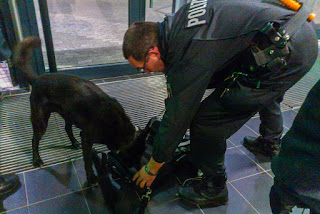 It’s not a war, no matter how much the protagonists like to think it is. Just assholes with guns. Restricting access to them would help, as would reducing their sales and putting an end to the conditions that drive people to extremism. It’s easier said than done. More likely is that privacy and freedom will be curtailed, intolerance will flourish, and insecurity will thrive. This is exactly what they want. We can’t give them what they want.