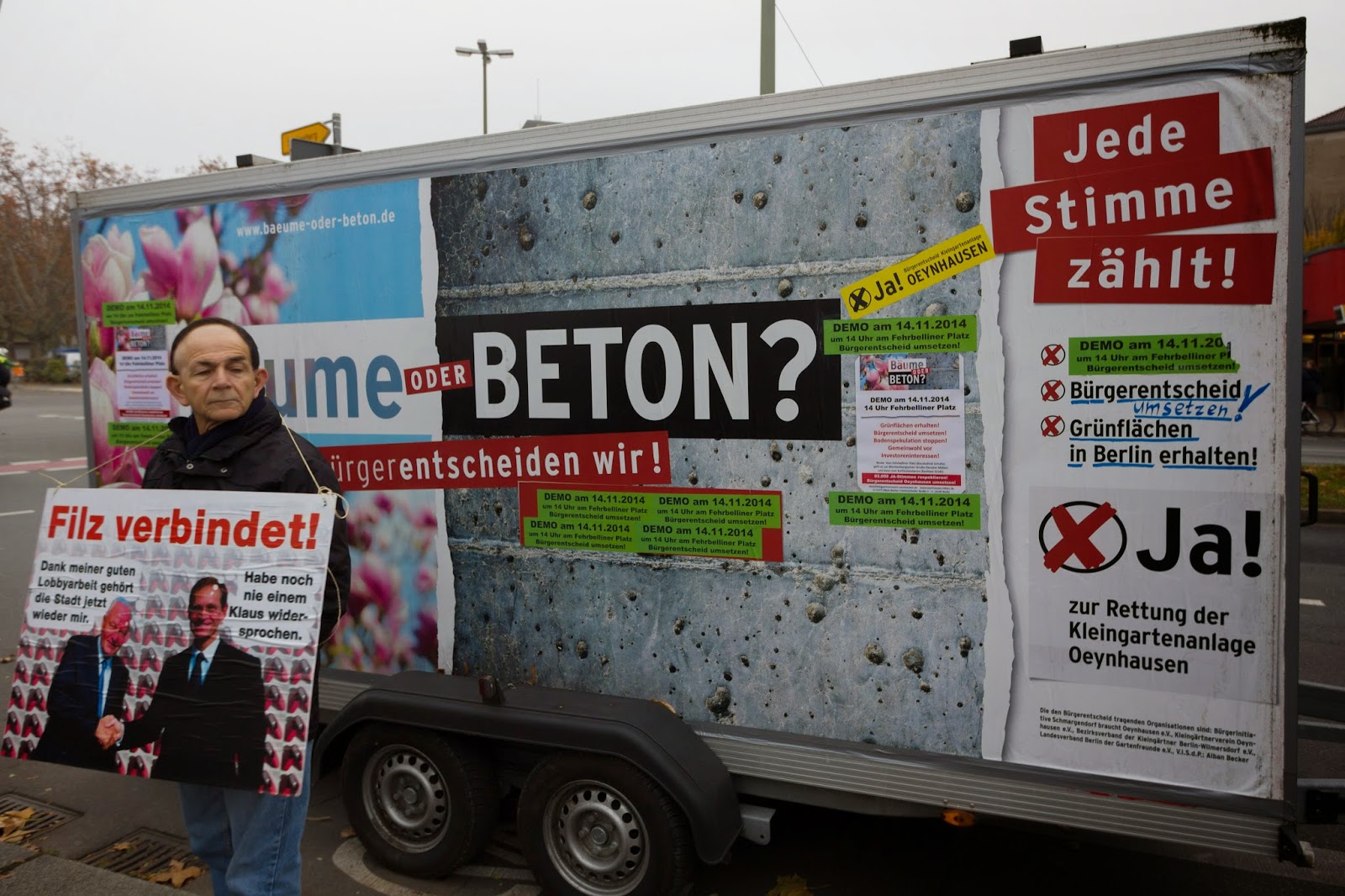 Last Friday loads of people from all corners of Berlin – all 47 of them – gathered in Wilmersdorf to highlight to plight of the city’s green spaces at the hands of evil developers and corrupt politicians. 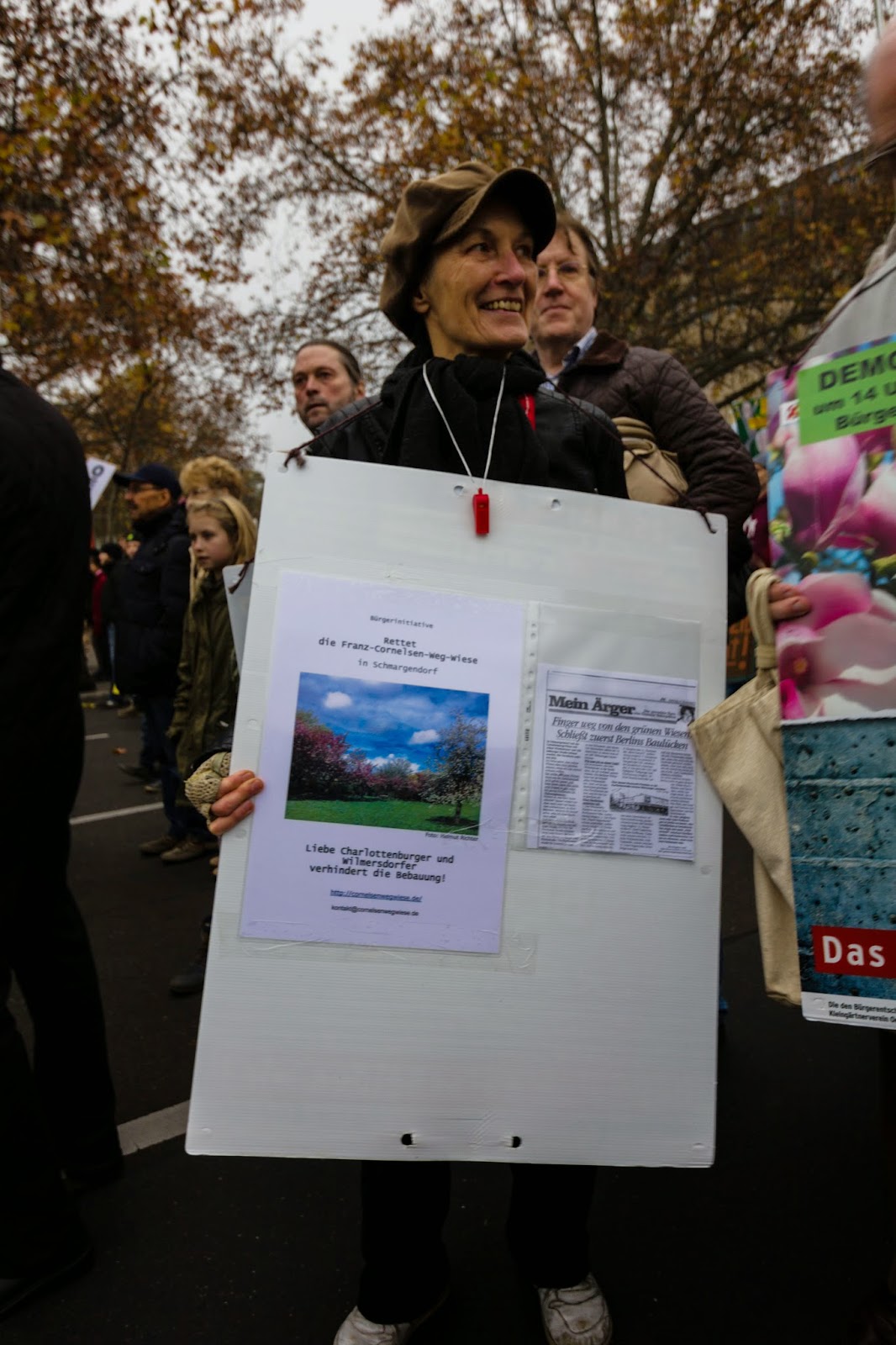 The demo brought together various concerned groups, from those against the 650 apartments planned for northern Mauerpark (it was ‘only’ 530 when the developer presented his plans last year), to people objecting to the destruction of their Kleingärten (garden allotments) and green spaces at Lichterfelde-Süd, Oeynhausen, and Spandau-Hakenfelde, along with the Franz-Cornelsen-Weg Wiese in Schmargendorf and others. 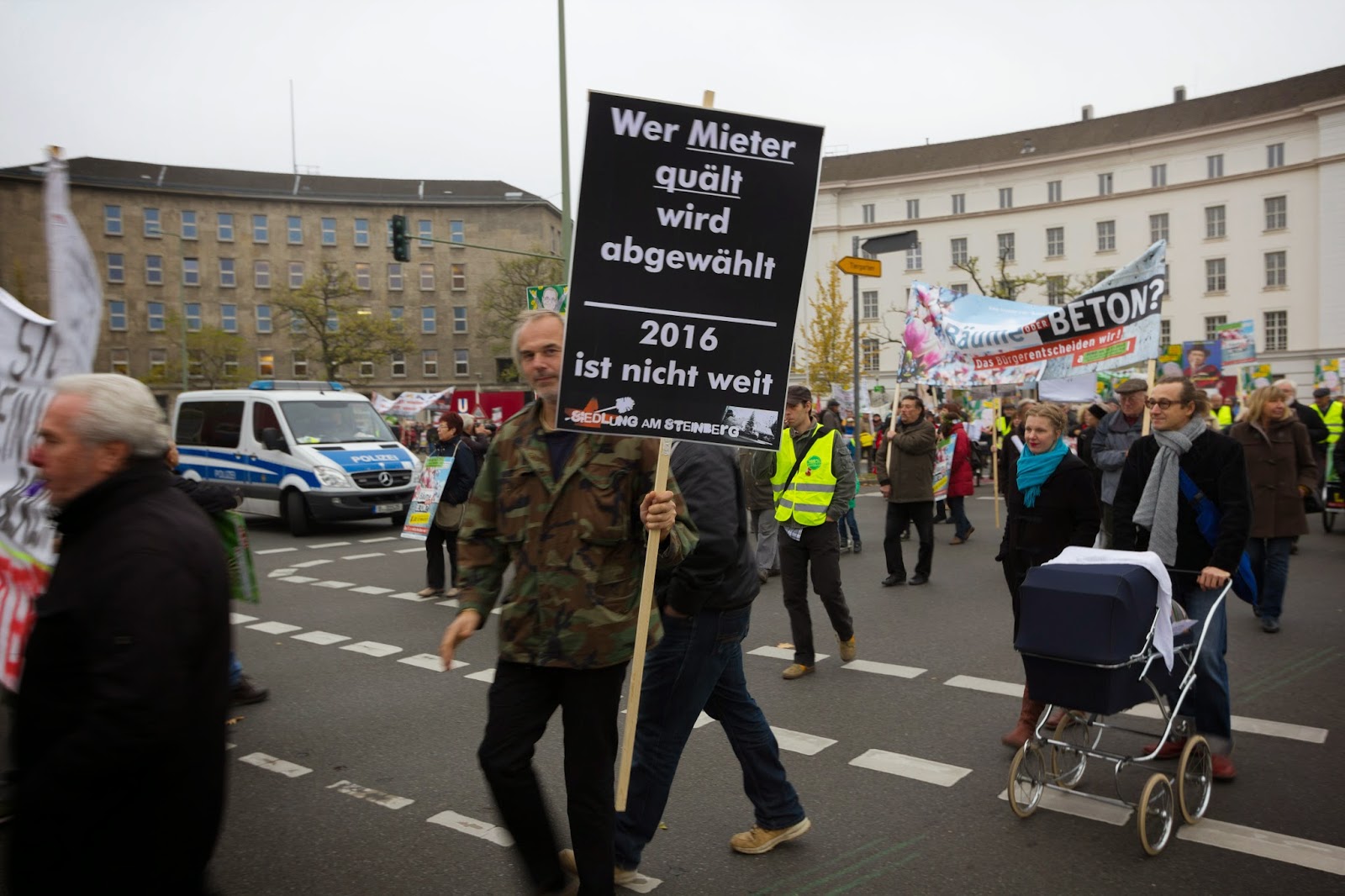 In short, people were seriously pissed off that their voices as residents are not being listened to. Some 85,000 people, 77 percent of those eligible to vote, voted to keep the Oeynhausen gardens alone but the powers that be have turned a deaf ear. 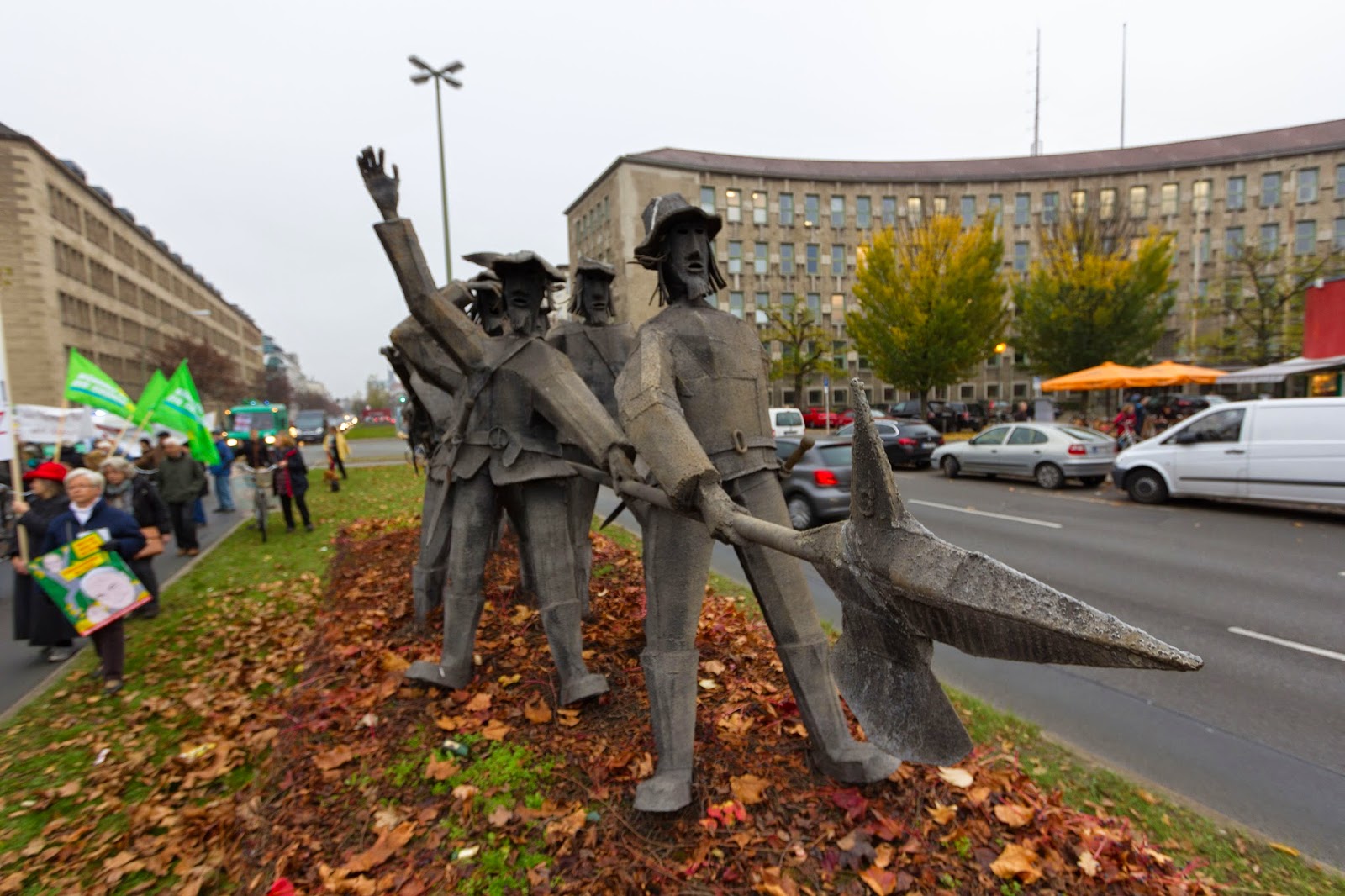 Public enemy No. 1 for the residents is Klaus Groth, the developer who has his finger in most if not all of these projects, aided considerably – a little too considerately – by city development minister Michael Müller. 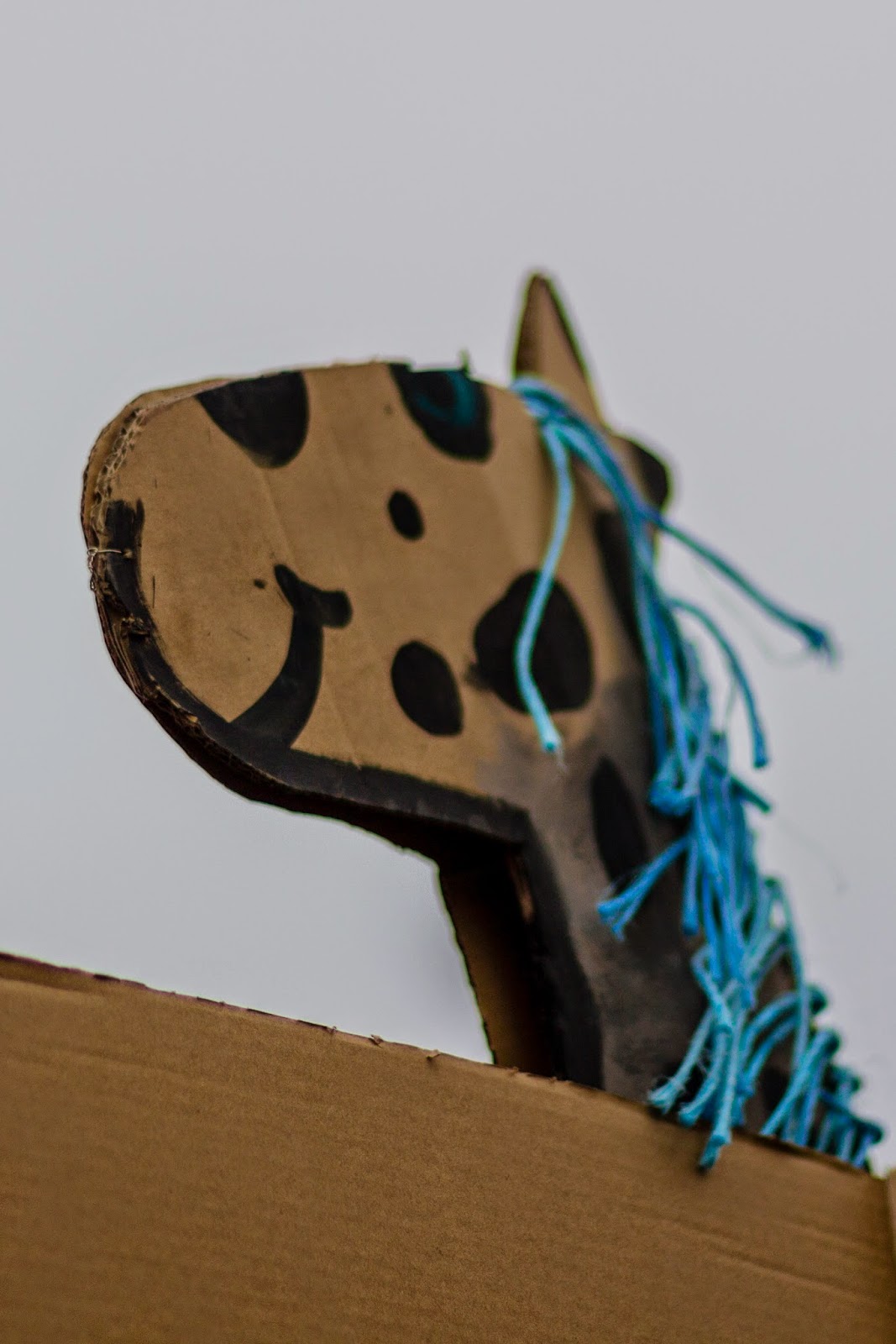 Groth has a shady past when it comes to his financial dealings and Müller is a shoo-in to be Berlin’s next mayor. He’ll be replacing Wowereit, who wasn’t exactly unkind to developers. It doesn’t bode well.
Well, the residents decided, “Fuck this, we’re not going to lie down and let this shit happen.” 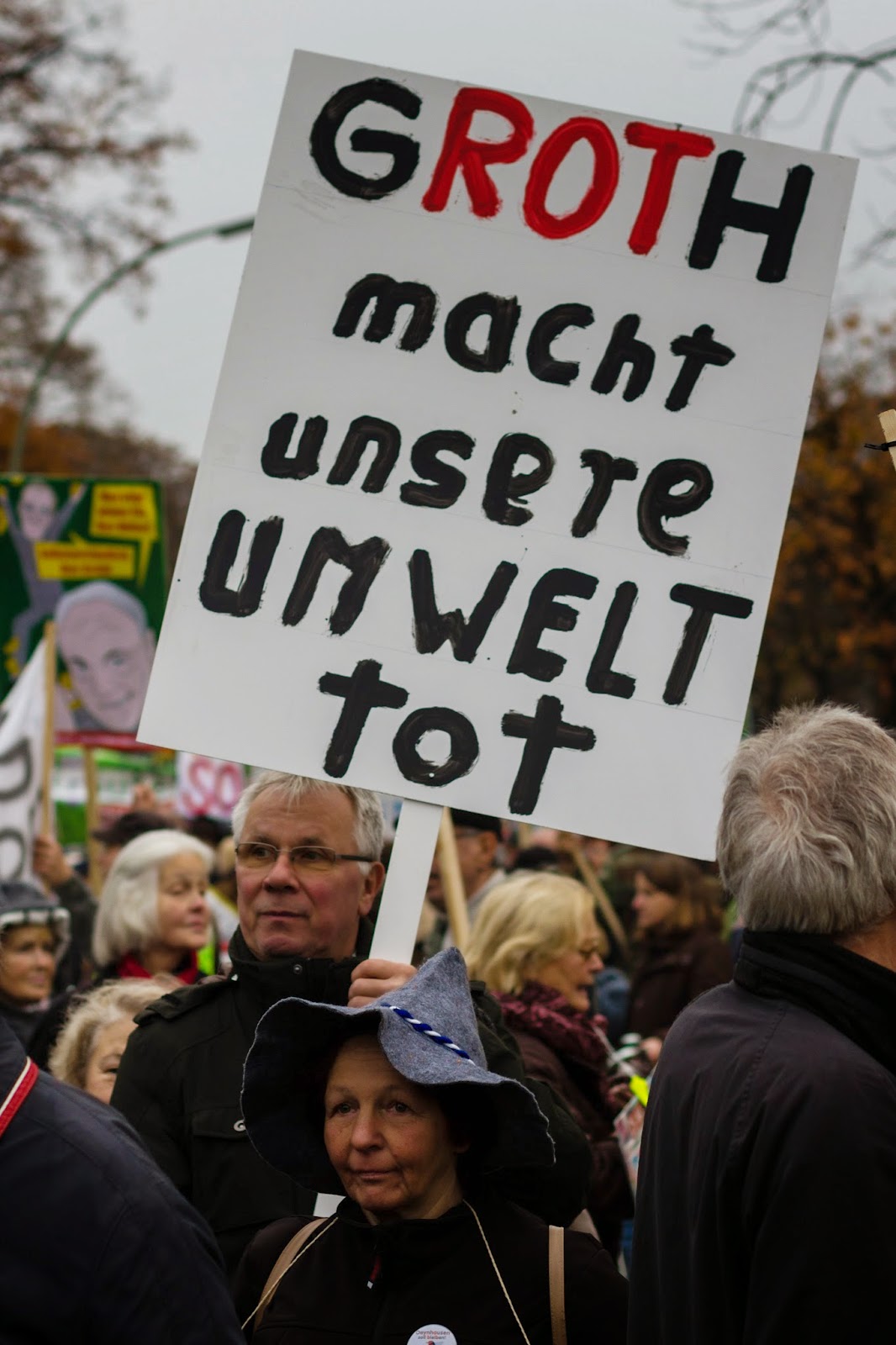 Hundreds, young and old, turned up on Friday to give voice to their concerns with their presence, whistles, noisy things, flags, placards, angry chants and slogans, while various speakers gave them further voice by outlining eloquently just what exactly those concerns are.
“Wir haben die Nase voll!”
The full-nosed citizens stopped outside Müller’s office for a loud protest so he could hear their concerns too. The racket was incredible! Friday afternoon though. I’m sure he was already well into his weekend. 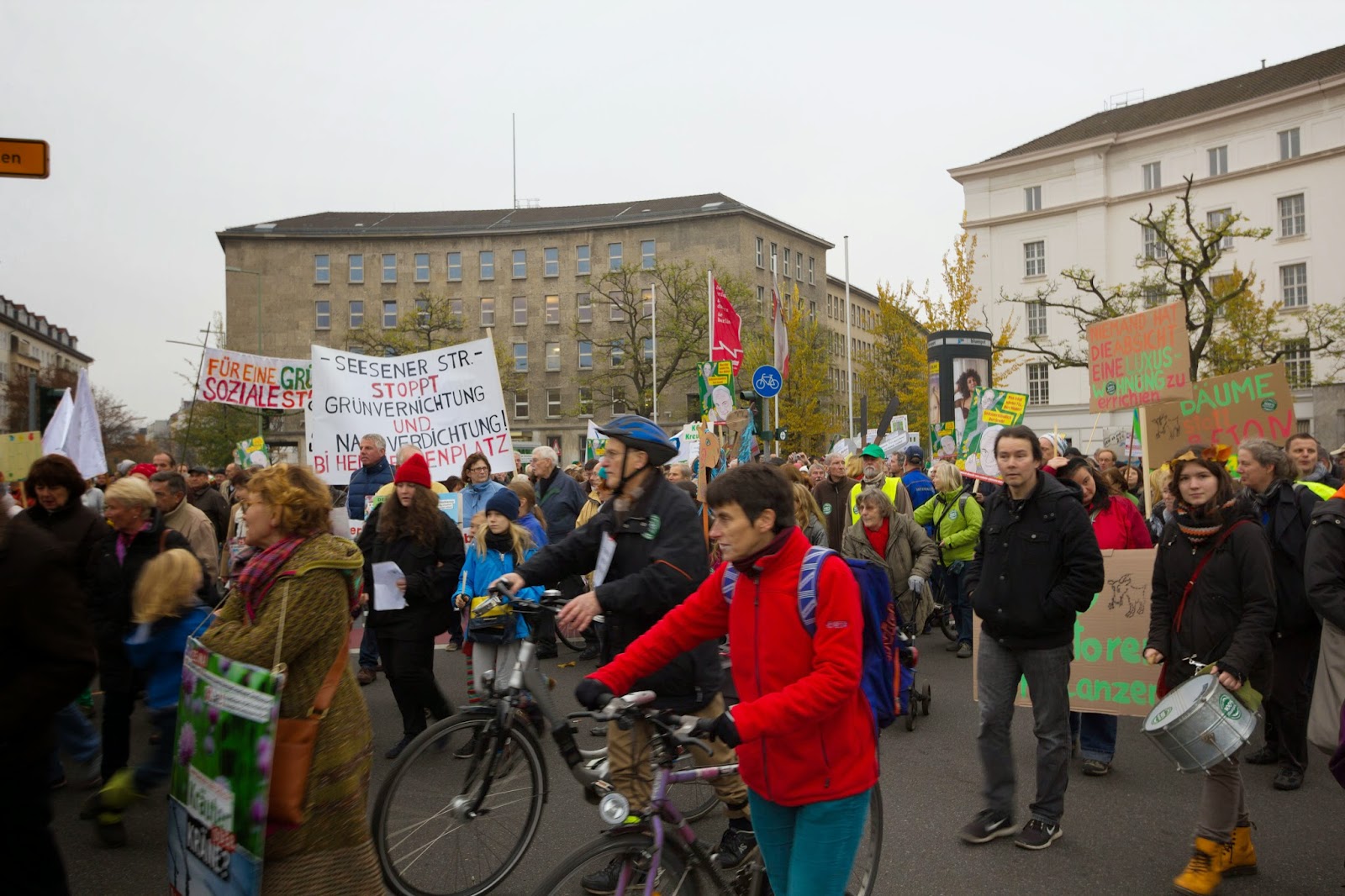 After that we walked up to Groth’s HQ, the Groth Gruppe building on Kurfürstendamm, stopping along the way at various points for more speeches and performances from The Pokes, a Berlin version of The Pogues. 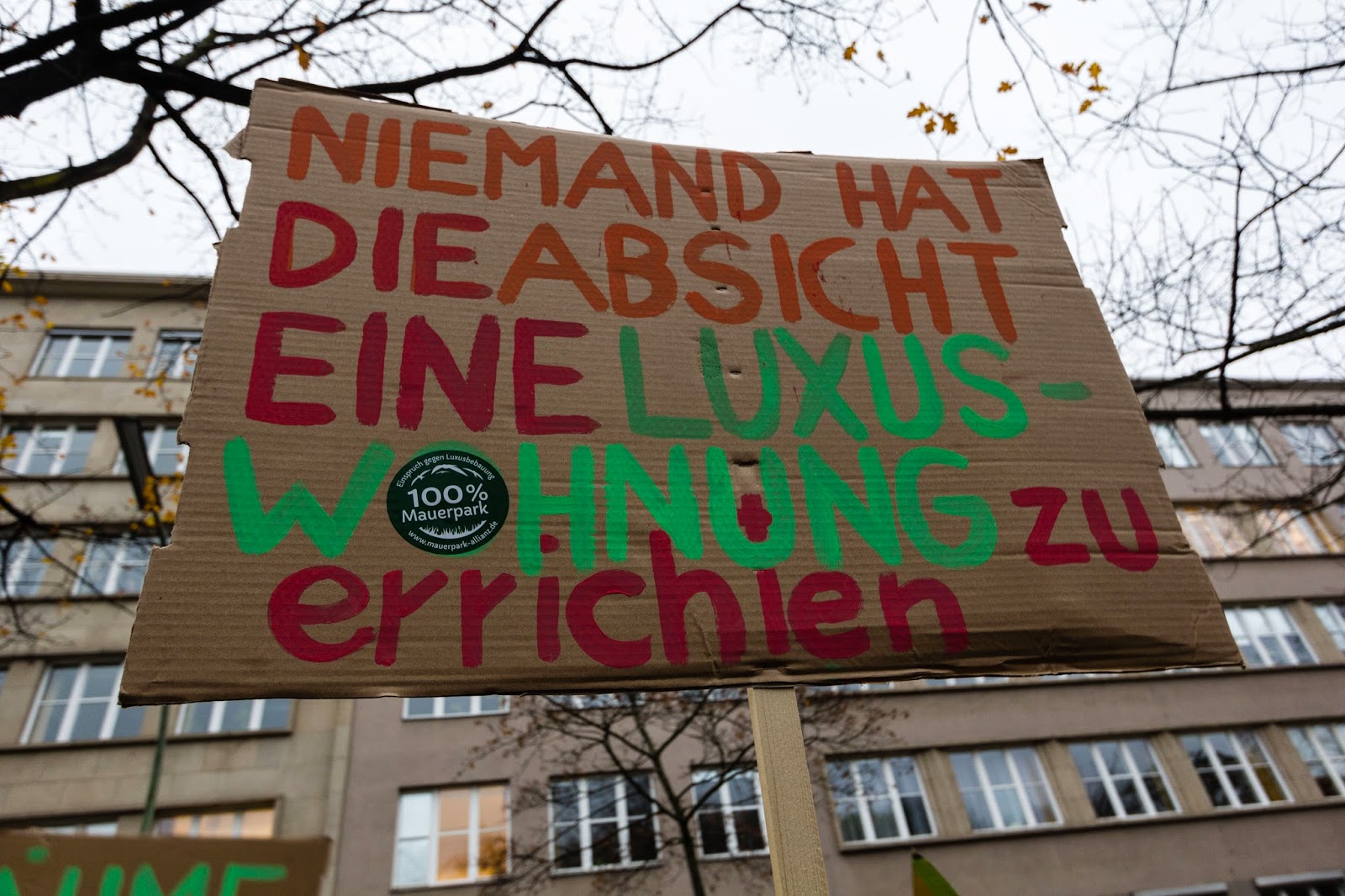 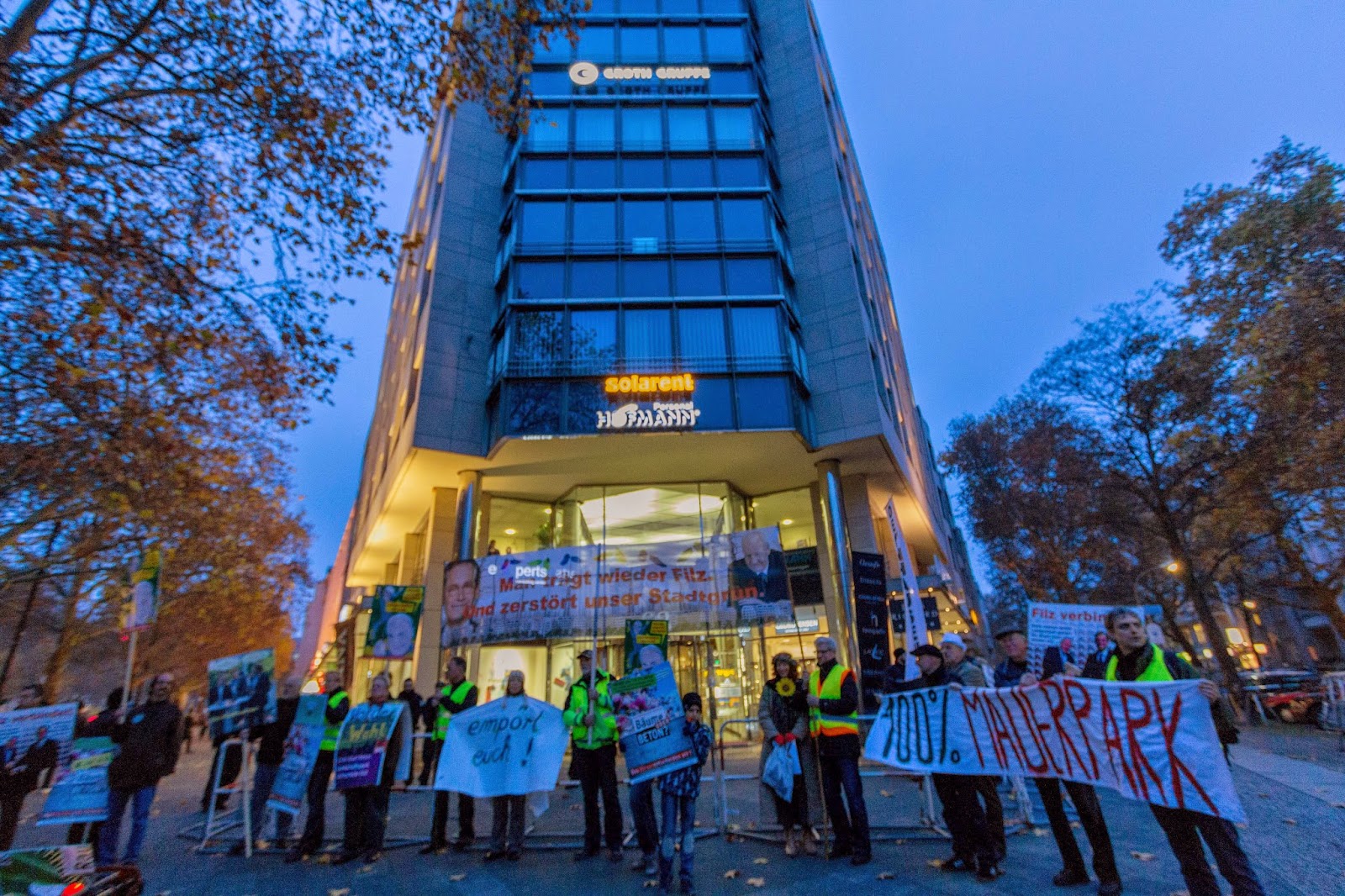 “I wish you a long life and a quick retirement,” one of the speakers said earlier.
The speeches were largely along the same lines, of broken promises, lies, greed and corruption. I wish I’d brought my recorder. Some of them were really rousing and the crowd was getting more and more fired up. 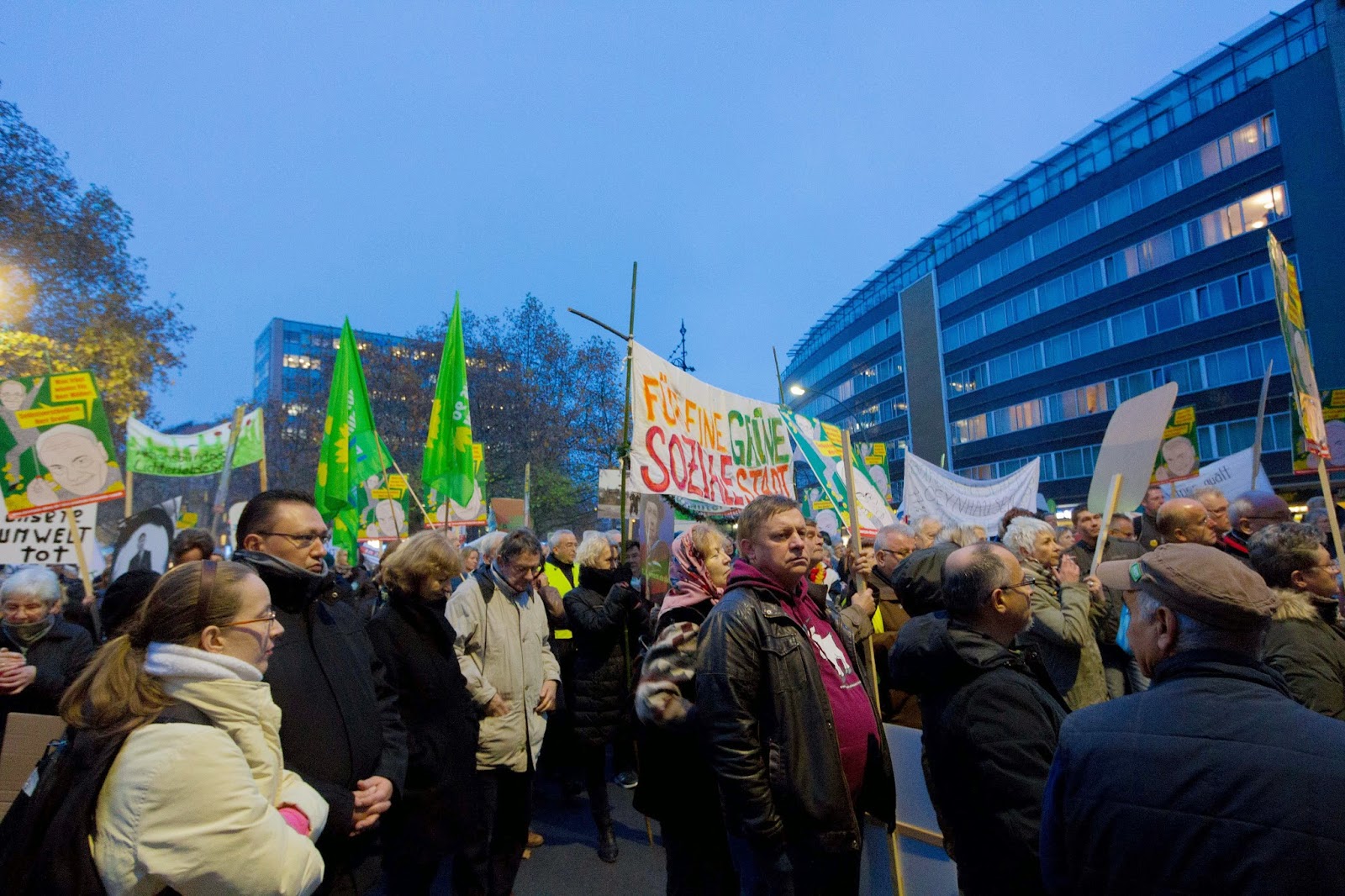 They were fired up to begin with. Assets are being stripped from communities for the benefit of a select few. Luxury apartments in Mauerpark will benefit no one but the builders and backers.
“We don't want a Berlin in which investors get rich with politicians’ help at our expense,” said the woman who gave the last speech.
I’m happy that there are clearly many who feel the same way and who feel strongly enough about it to fight for it too. The fight continues. 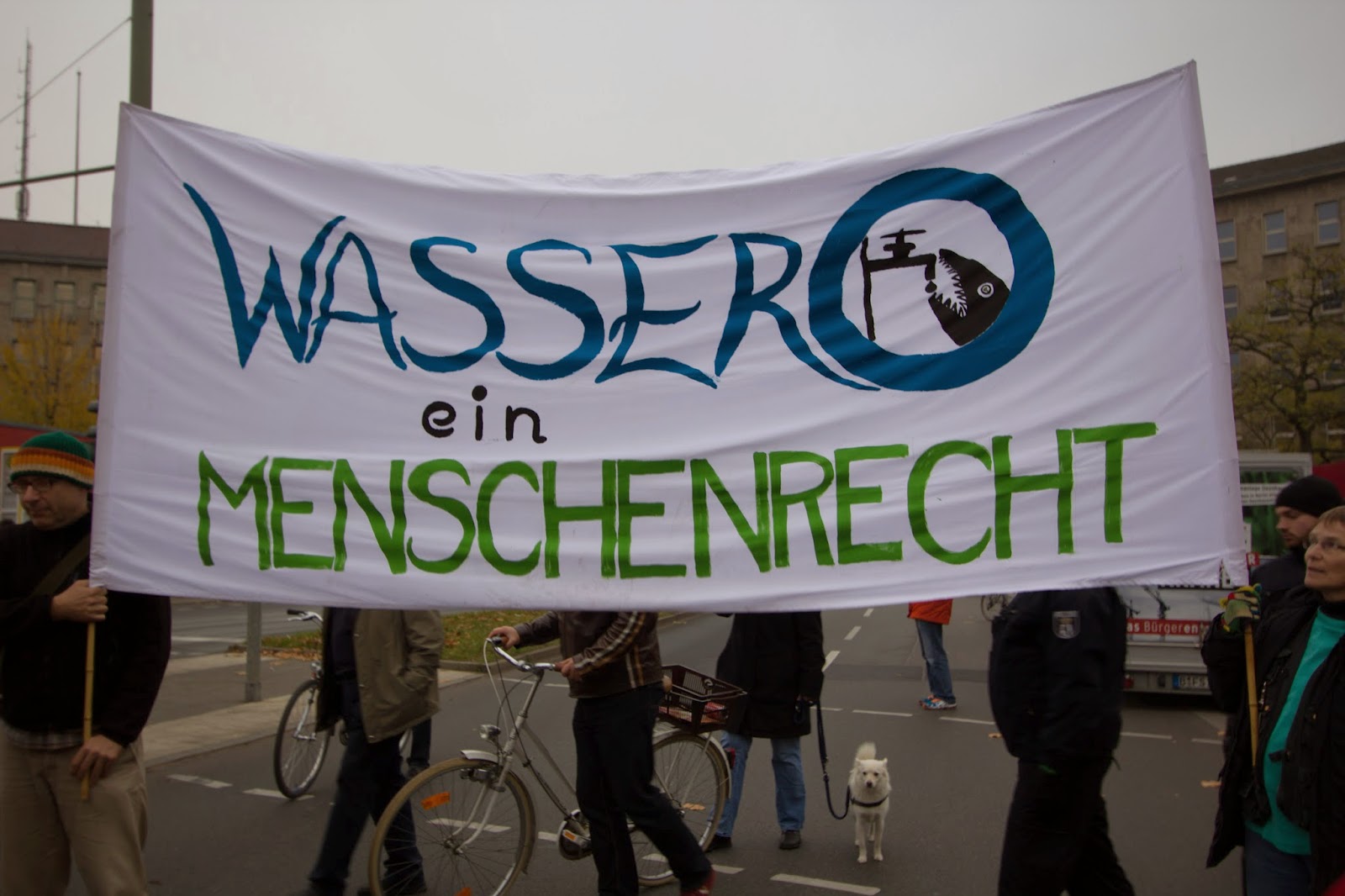 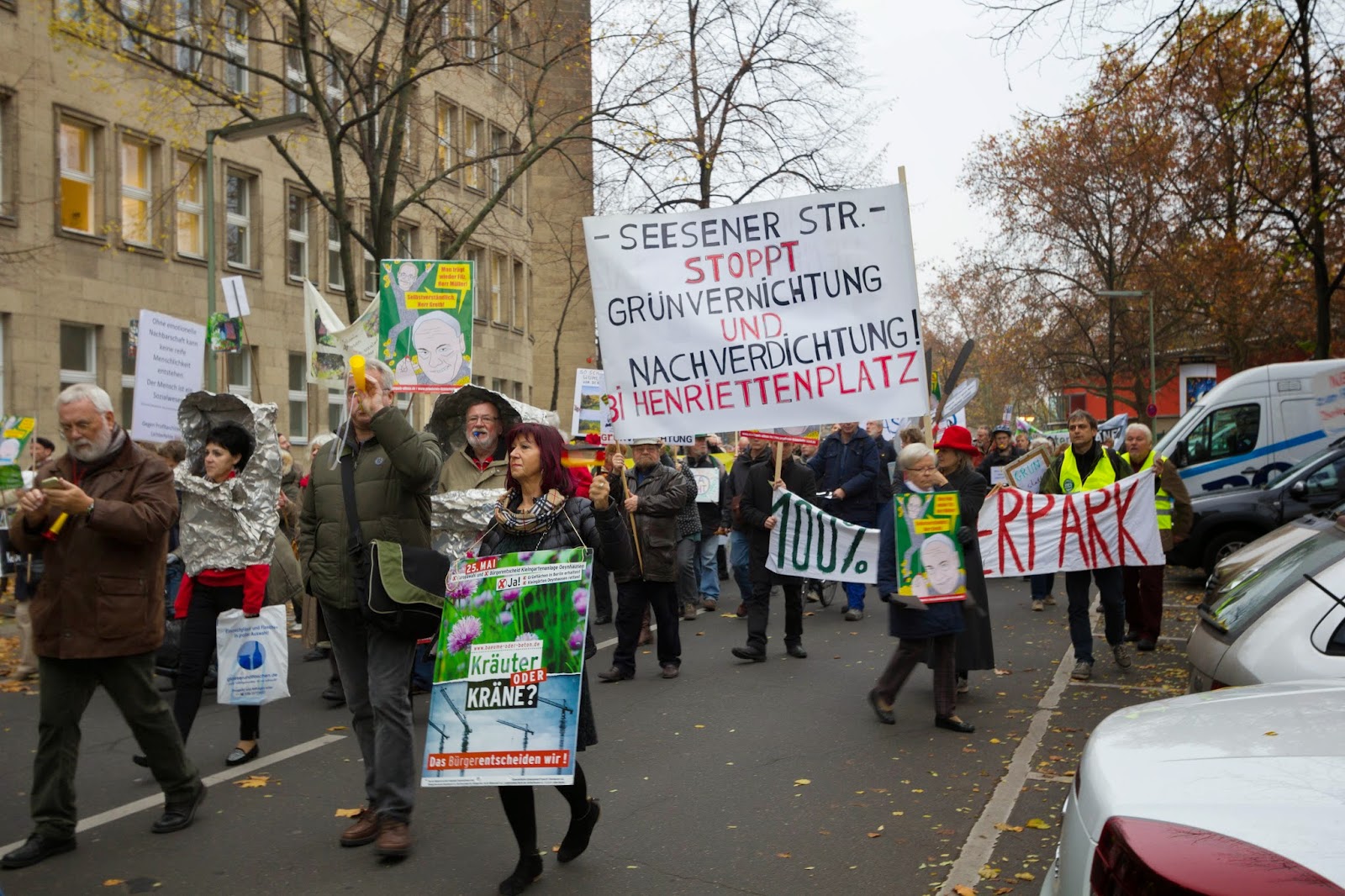 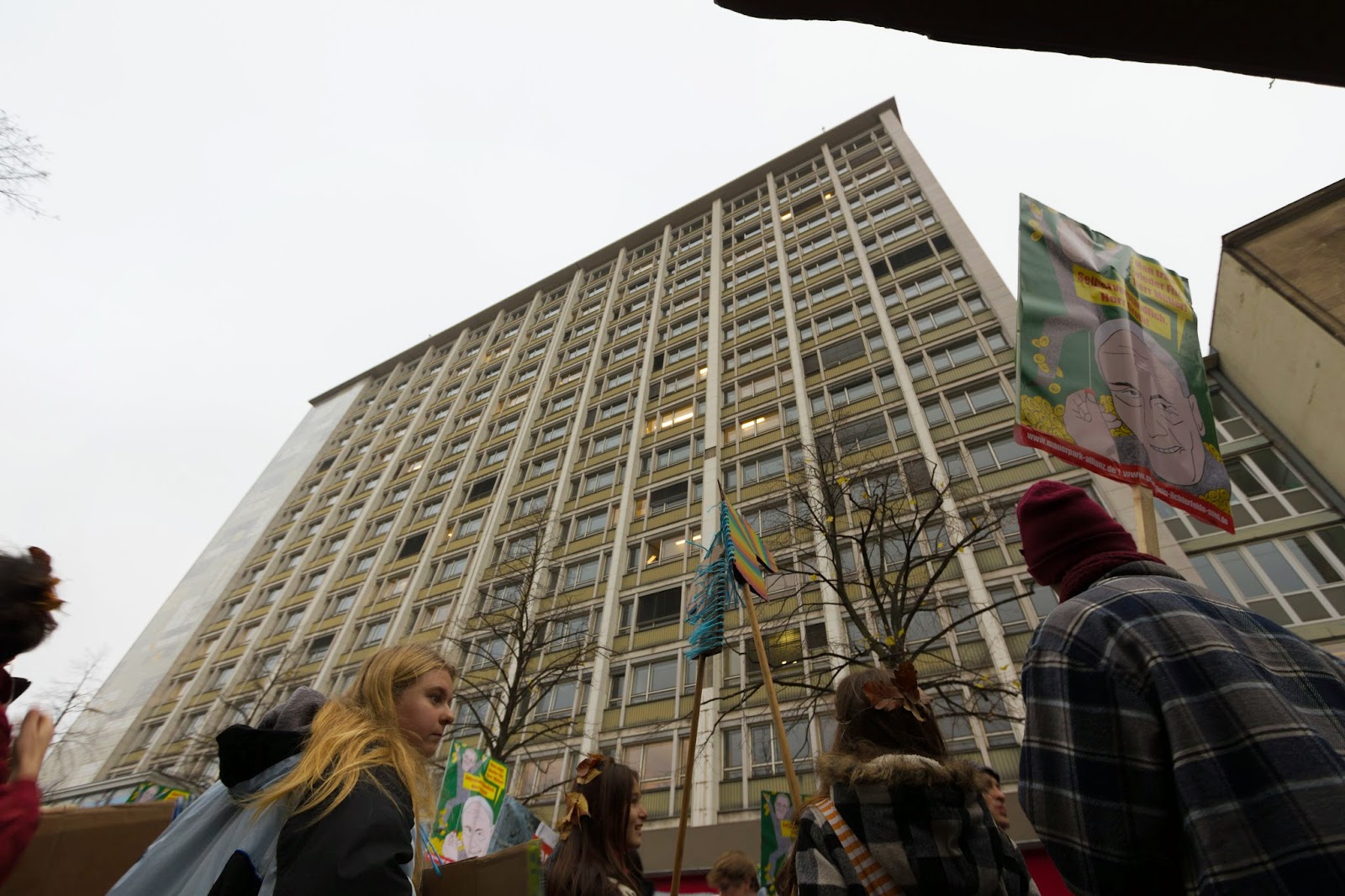 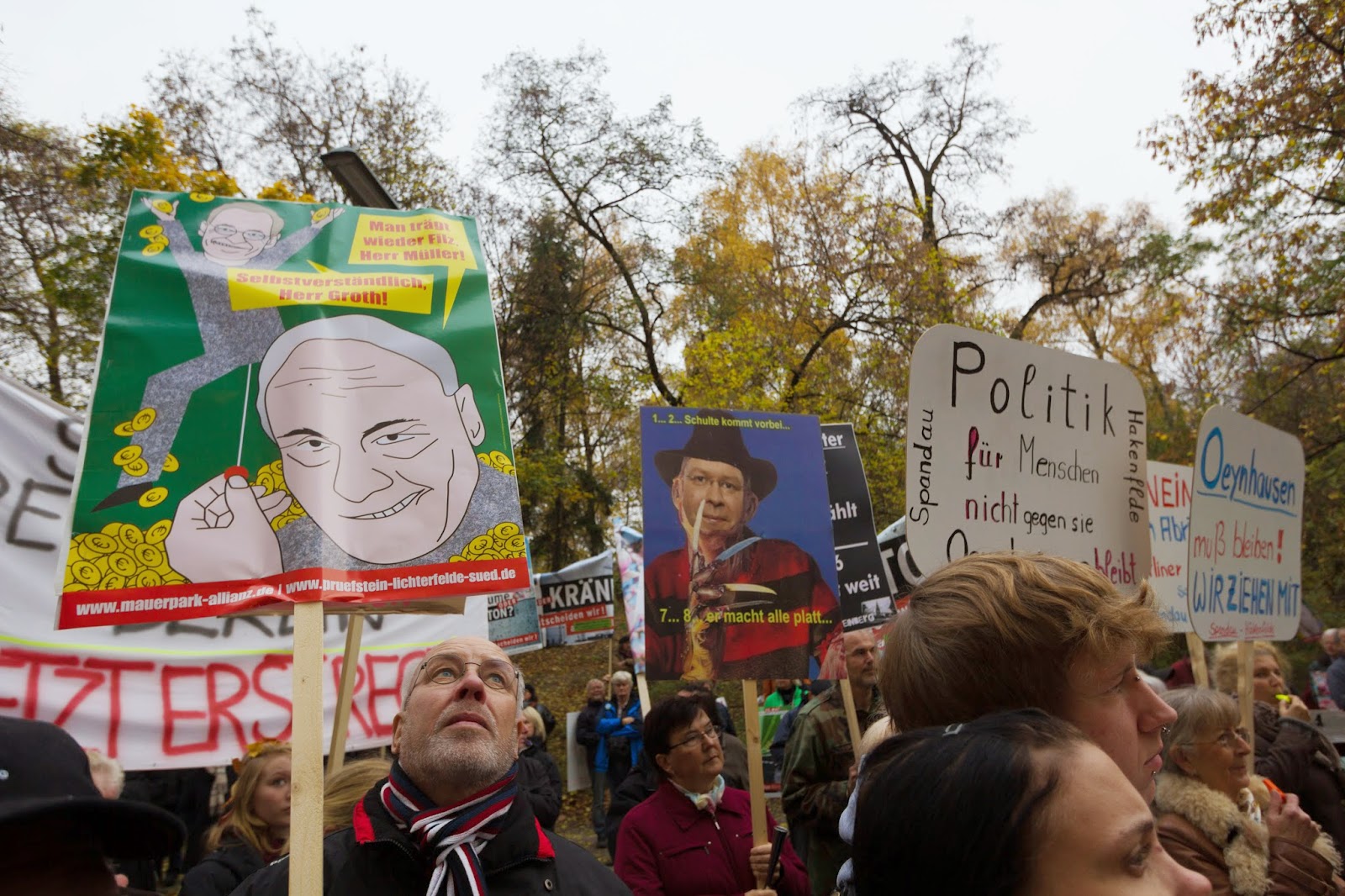 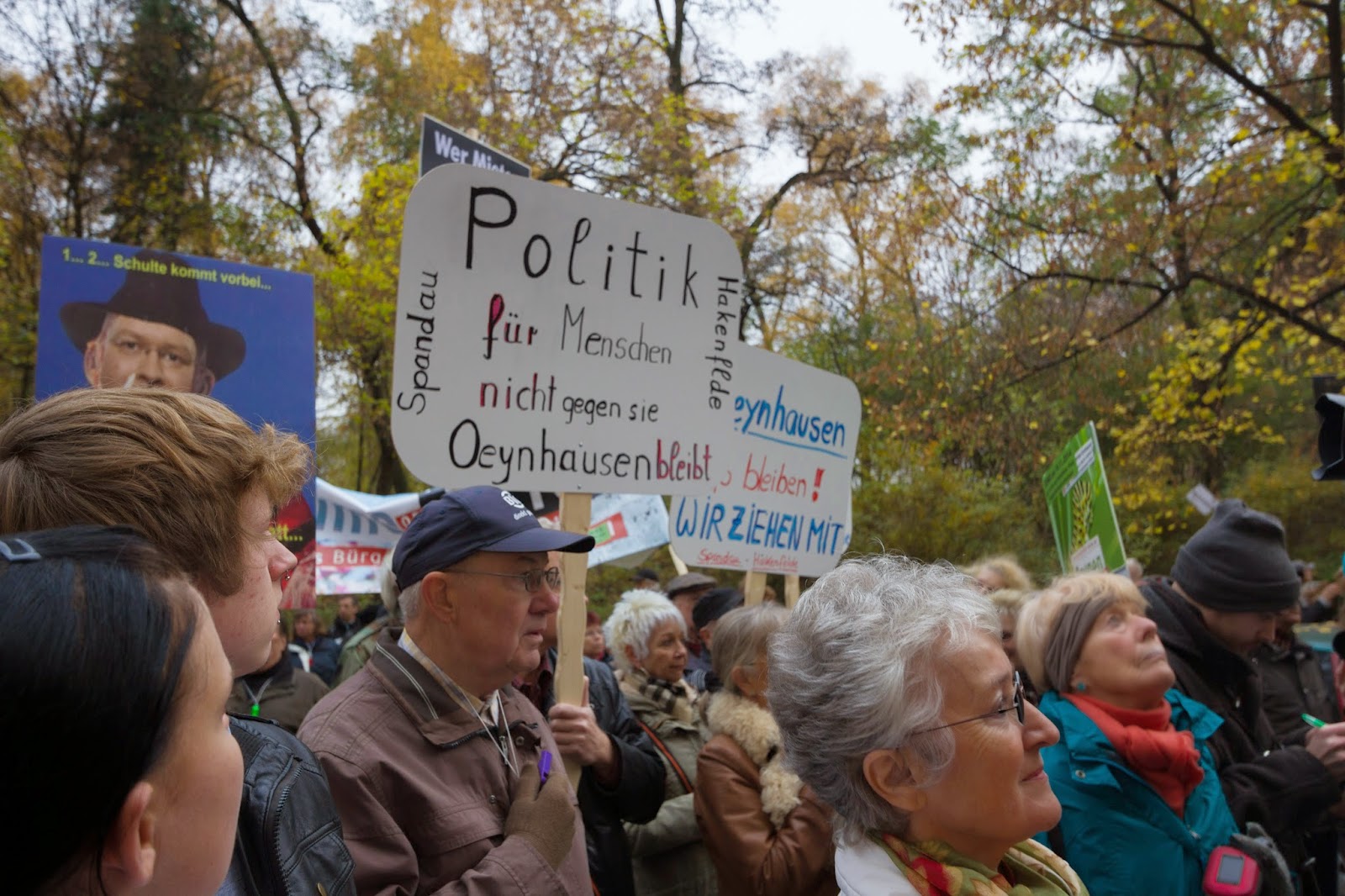 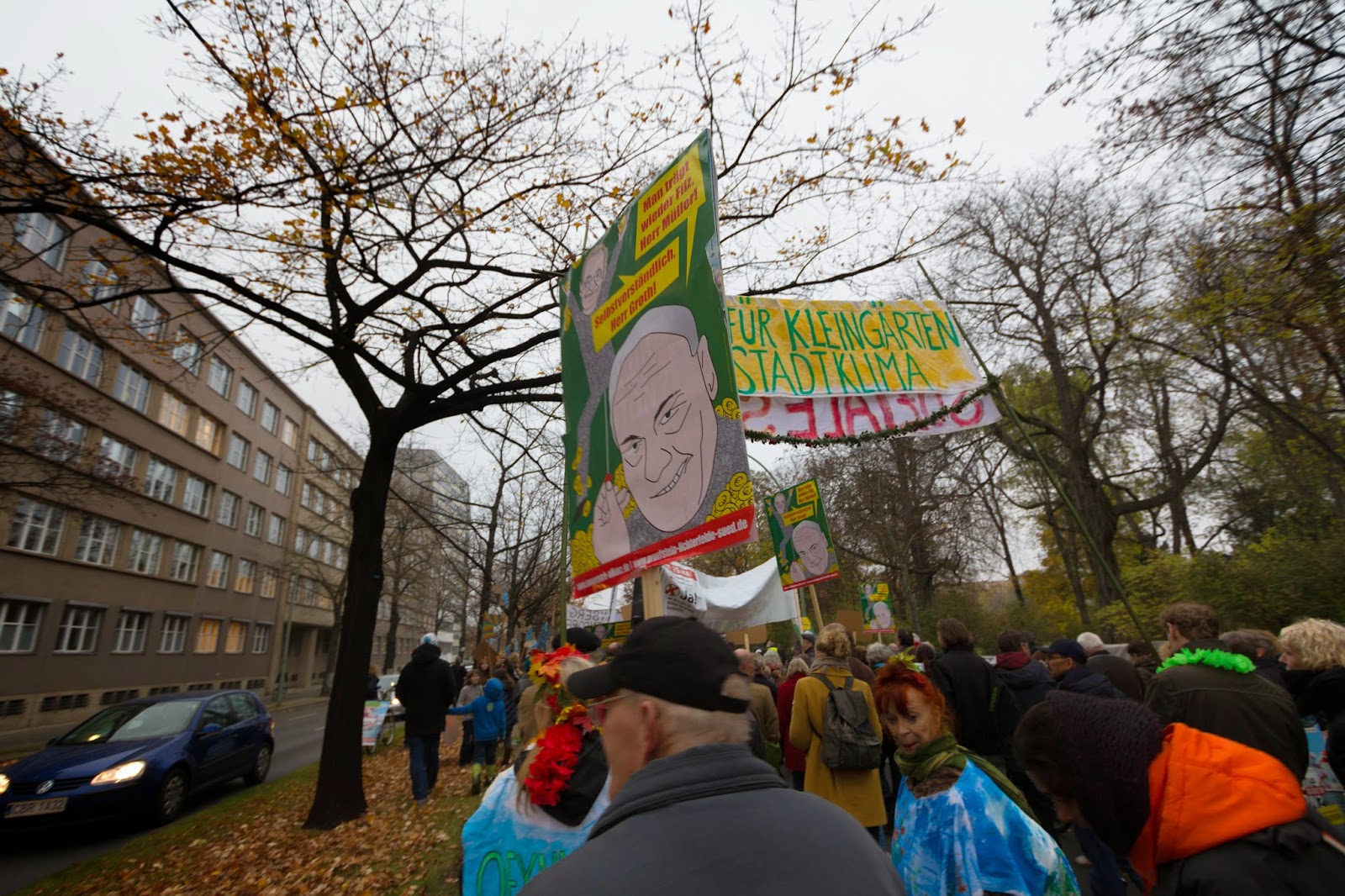 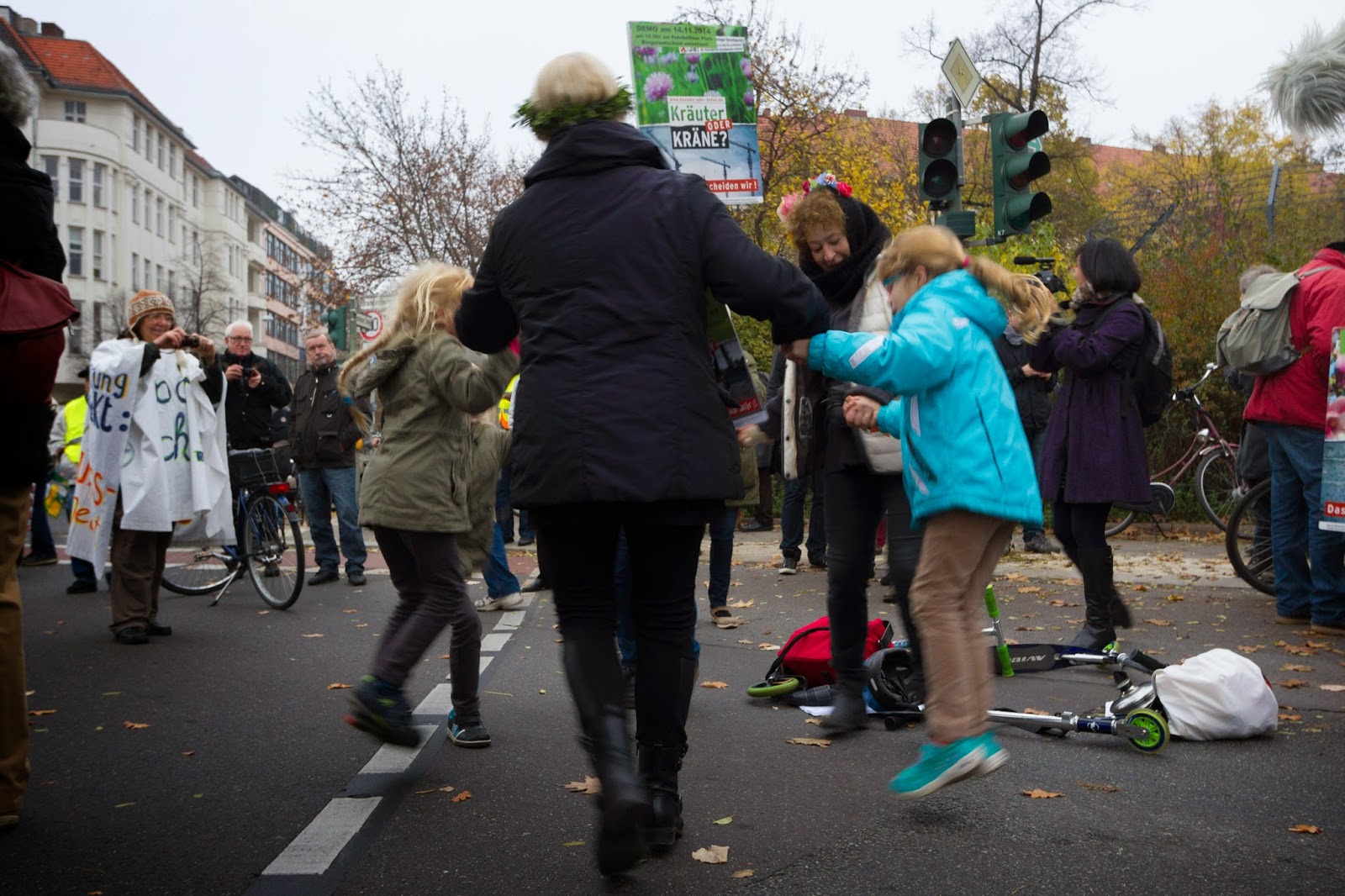 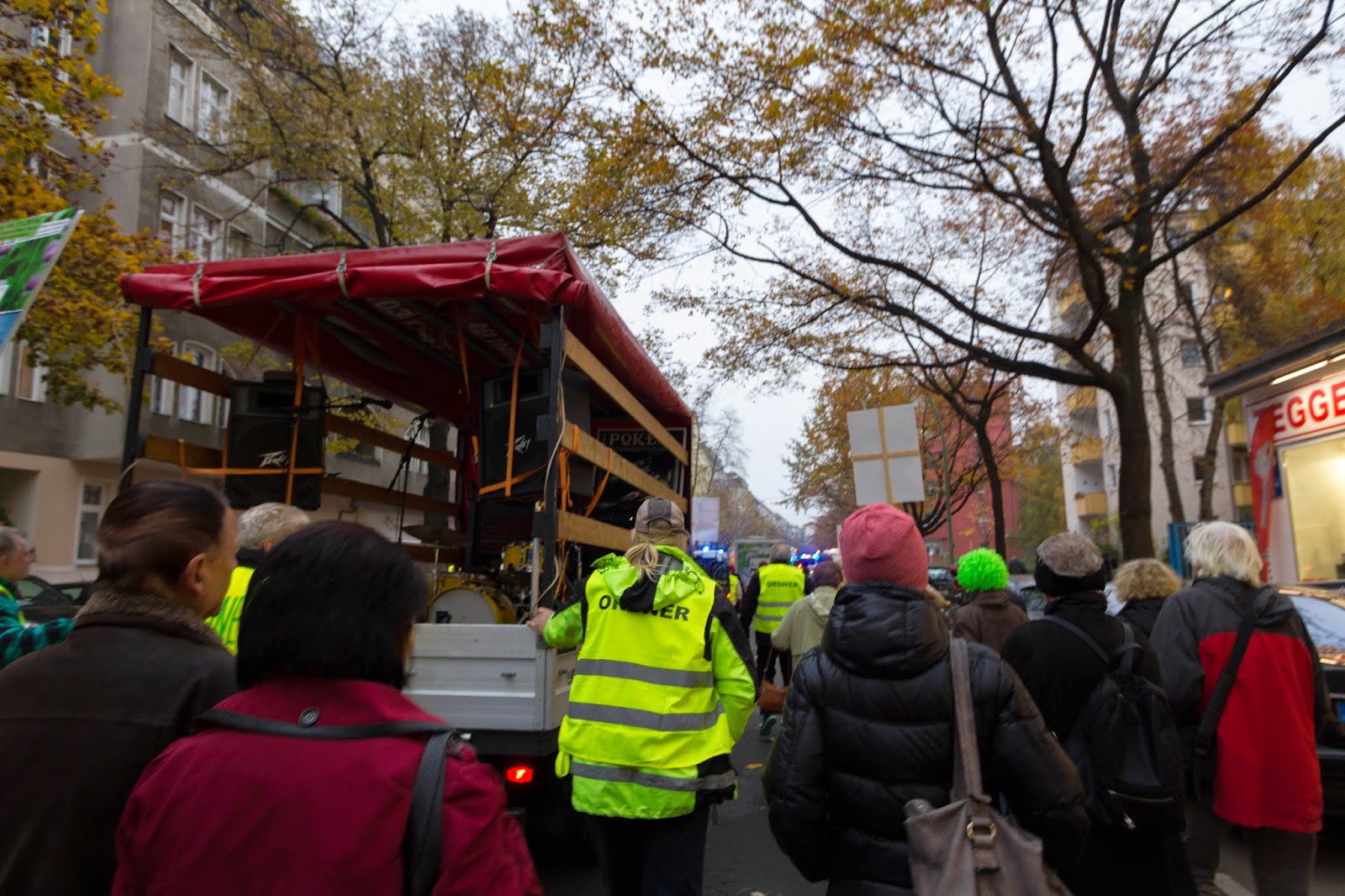 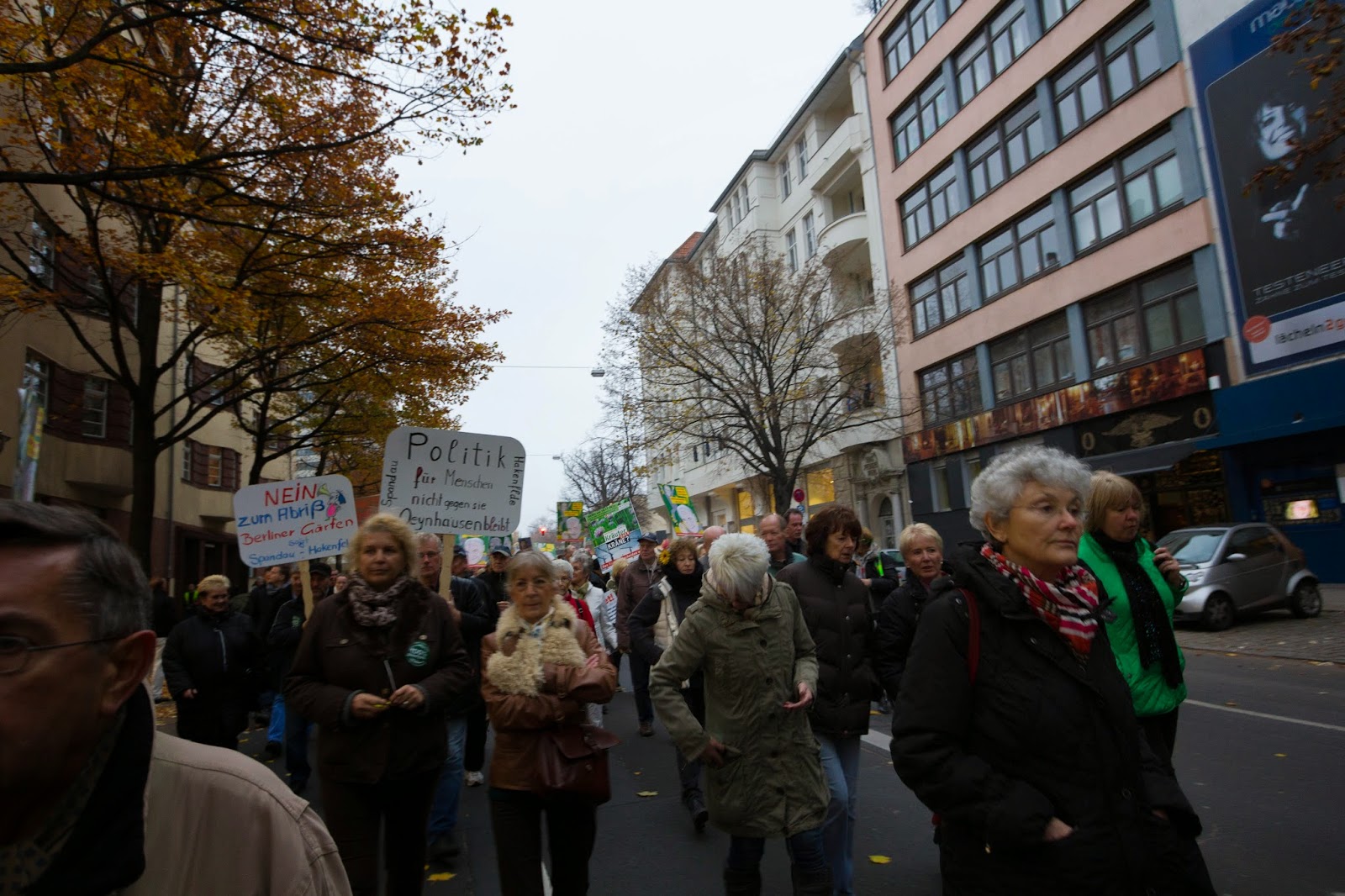 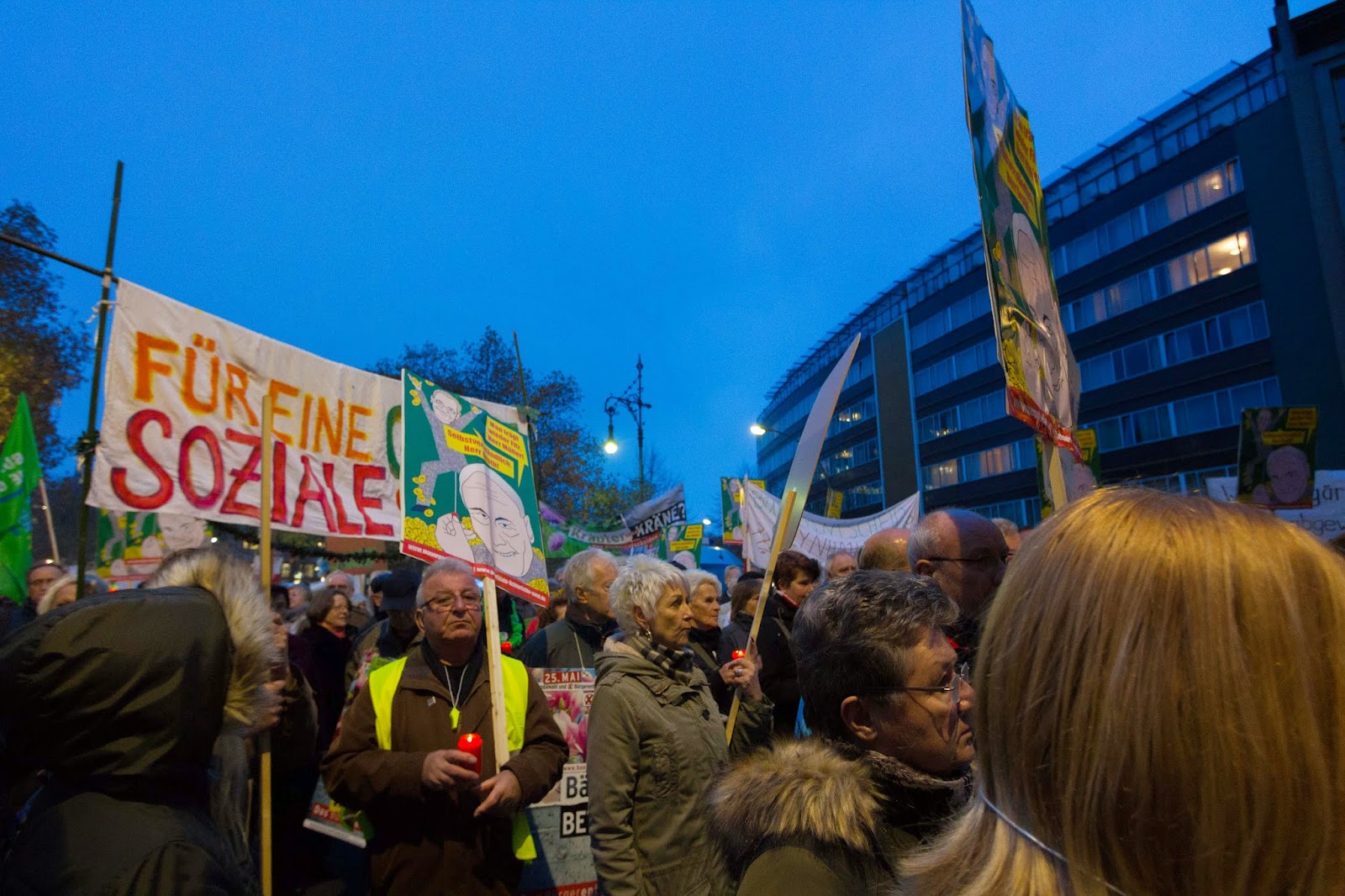 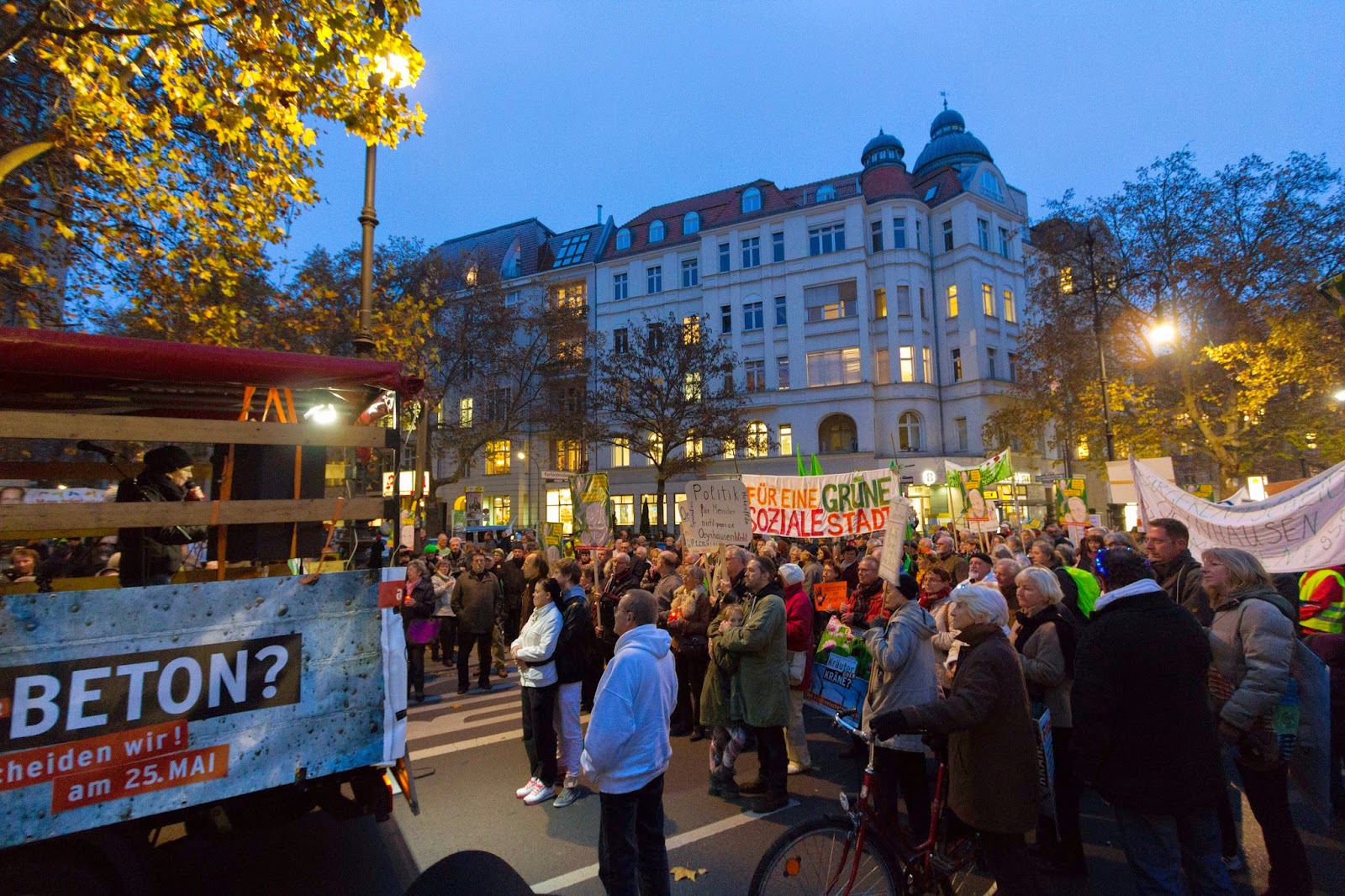 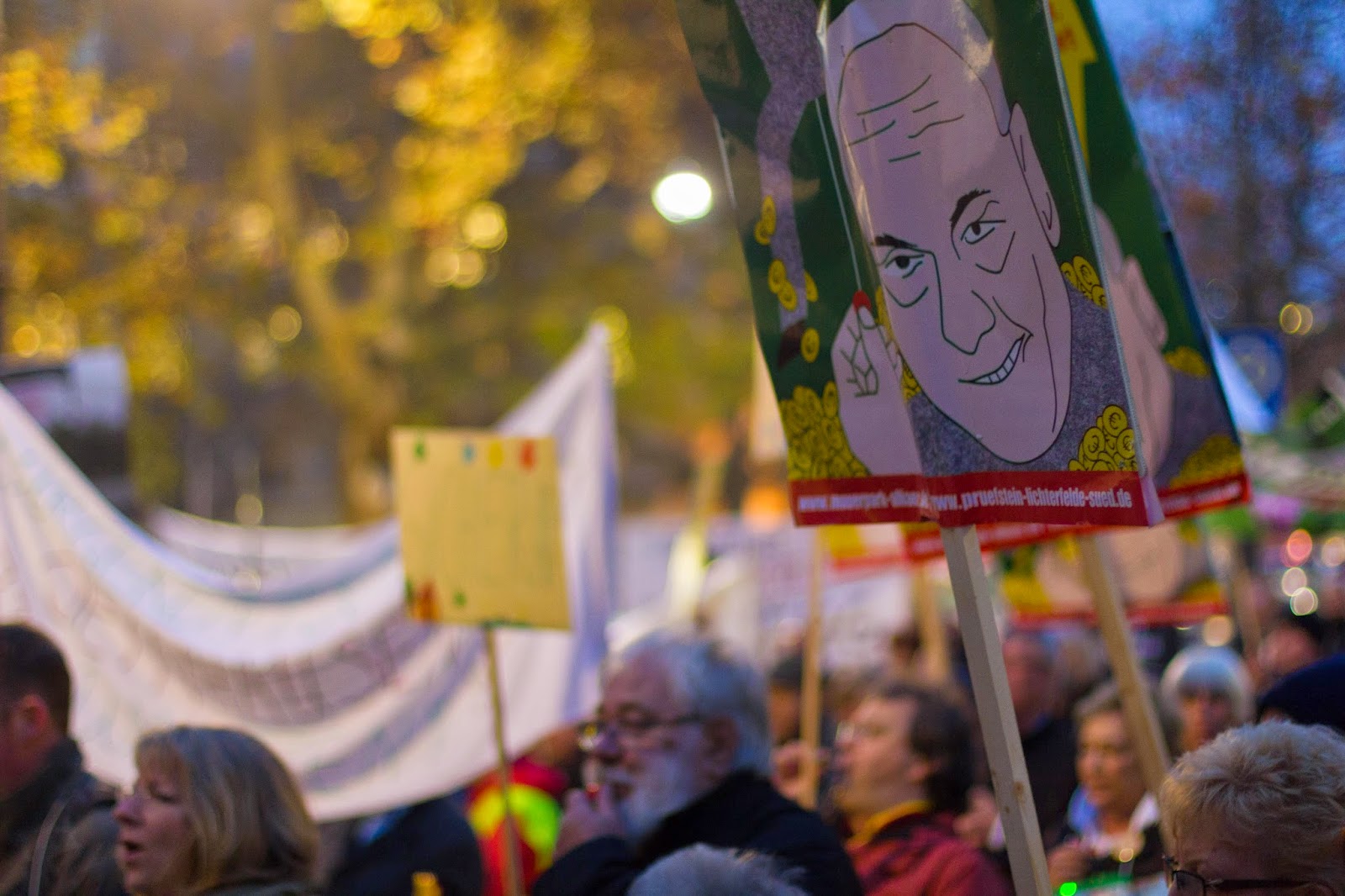 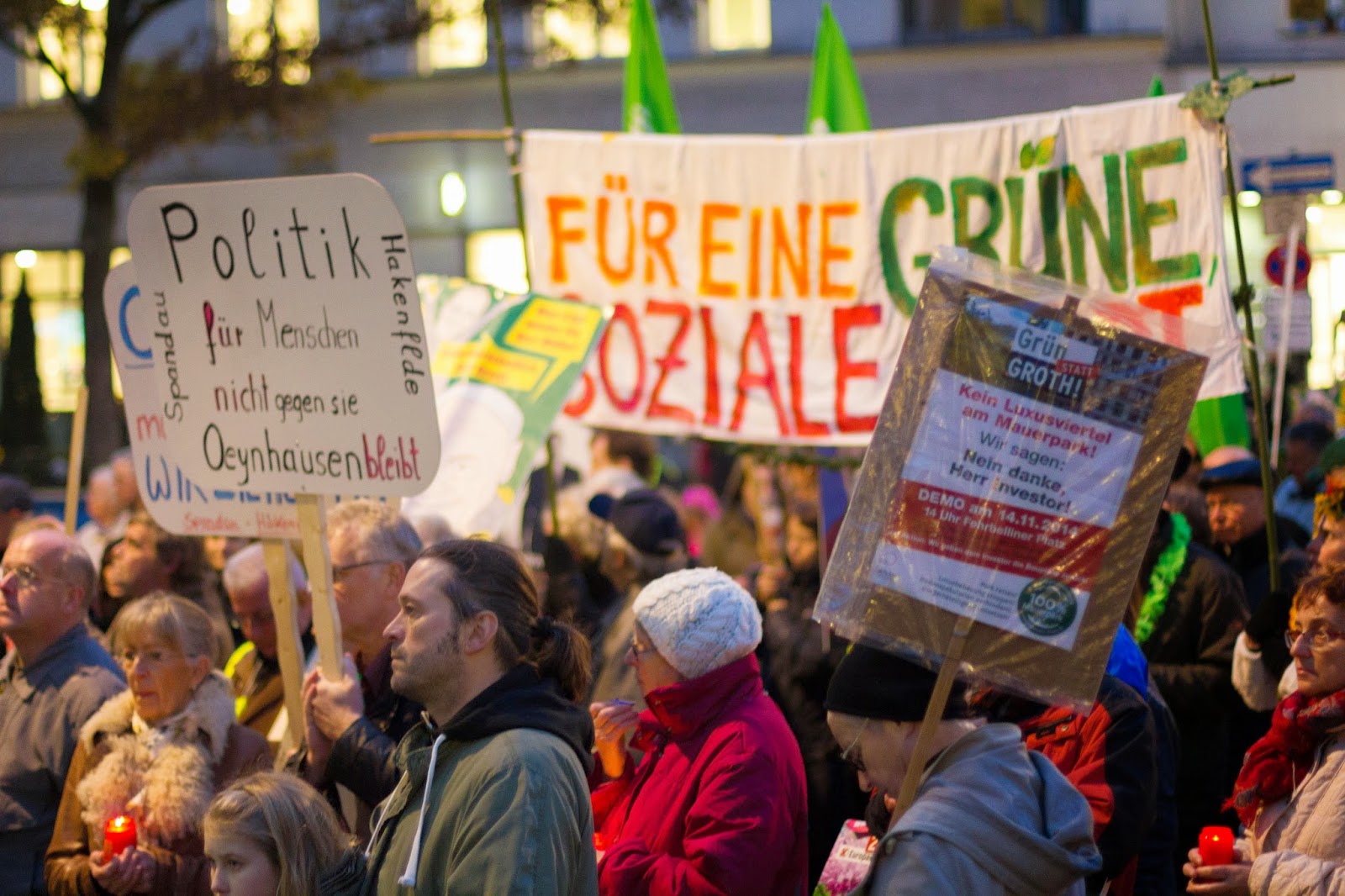