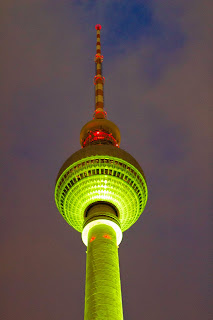 Yesterday, St. Patrick’s Day, marked six years of me being a Berliner. Six years! The young fella is already three, so it means I’ve now spent more time here as a dad than not. Mad shit. I suppose it won’t be long before he catches up with me…
We went down to Alexanderplatz for the day that was in it. The gobshites held the parade the day before so the only way of celebrating Paddy’s Day was by going to one of the pubs and getting pissed. But the young fella wasn’t into that so we had burritos instead. Traditional Irish fare. When we came out it was starting to get dark and there it was, resplendent in green – the Fernsehturn! 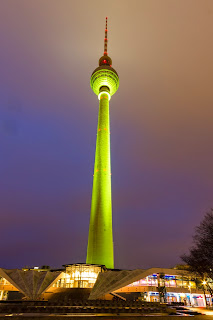 “That’s green for me and you!” I told him as his eyes lit up and a great big smile came across his face. “It’s green for Ireland. It’s a present from Berlin!”
He was delighted. He seems to be as much into the Fernsehturm as I am. He laughed, happy as a pig in shit. “Let’s go!”
So we went over, walked all around it. Then Tony rang for a chat, only dropped his bombshell as he was hanging up. Another one on the way! We’ll be seeing them soon enough…
We climbed up the steps, climbed down the steps, gazed in wonder through the windows at the nutjobs exercising in the gym, listened to some to marijuana-toting pissheads’ shite German hip hop, he ran around and I took a few photos. 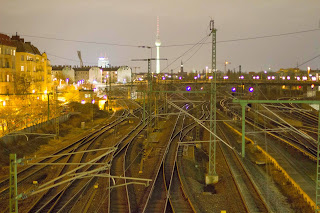 He wanted to go up to the top of the Fernsehturm but it was cloudy and dark so there wasn’t much point. I told him we’d come back another day.
Maybe next year I’ll have a proper party. After the previous six years I was too exhausted to hold one this year. I’m not complaining. Things are going well and they could always be a helluva lot worse.
Maybe I won’t wait a year to have that party. I’ve been taking about it for the last six…
Labels: achievements Fernsehturm St. Patrick’s Day