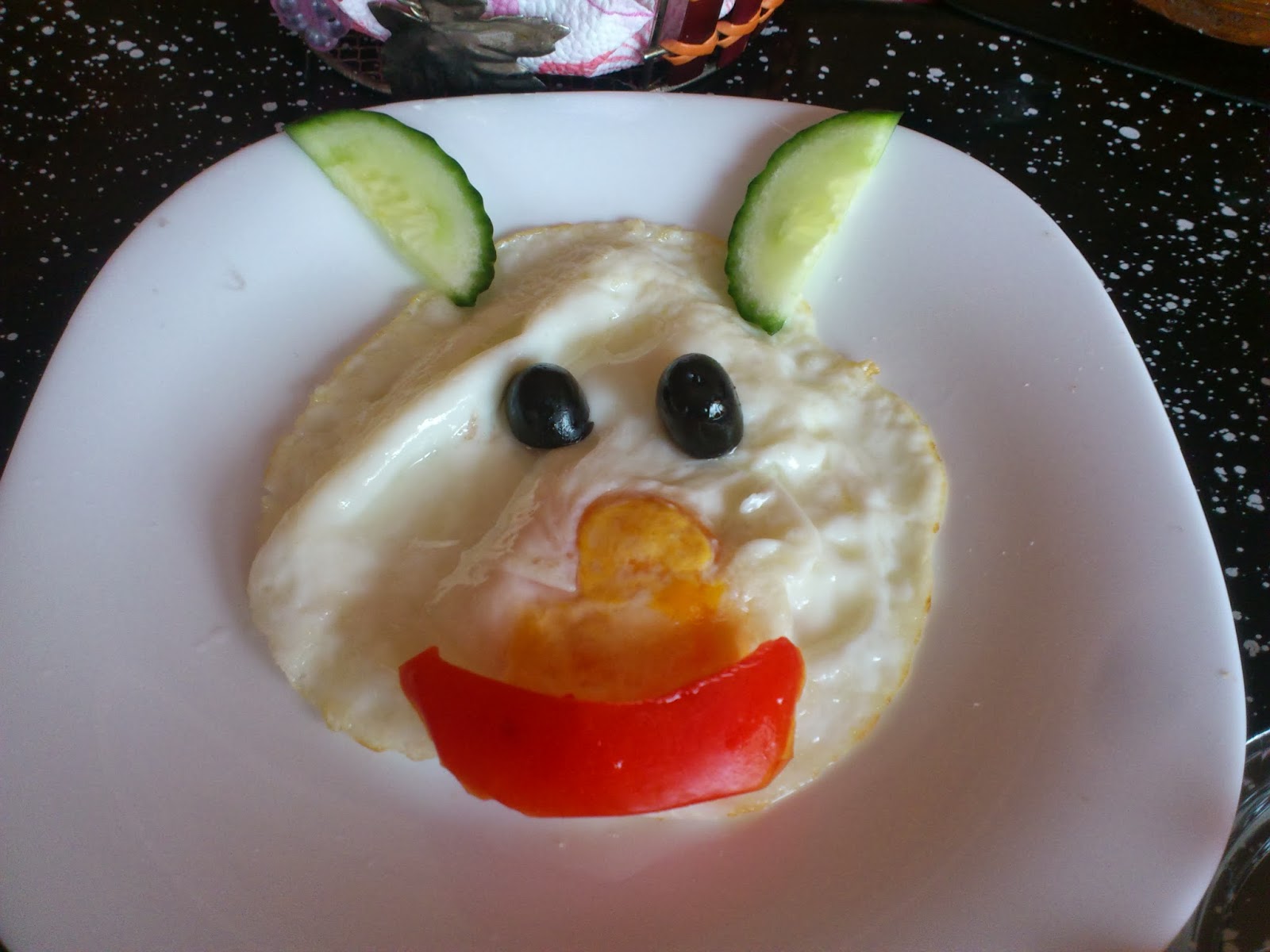 There was more to my trip to Bulgaria than Buzludzha of course. There was, well, Bulgaria. 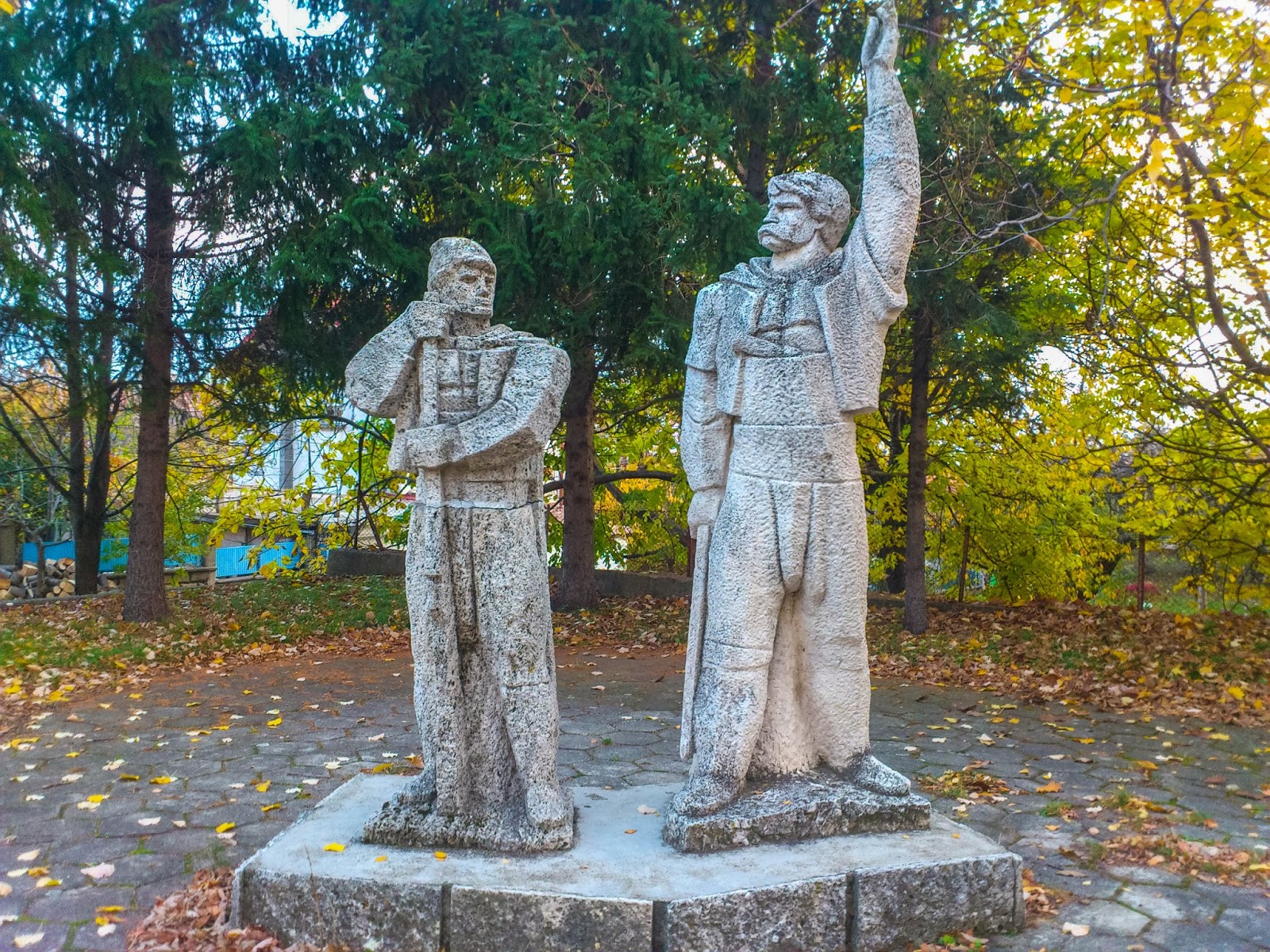 Sofia was an assault on the senses upon arrival. My trusty guidebook told me there was a minibus straight to the center from the airport terminal. There wasn’t. The trusty guidebook failed its first test and wasn’t trusted no more. No nay never no more. 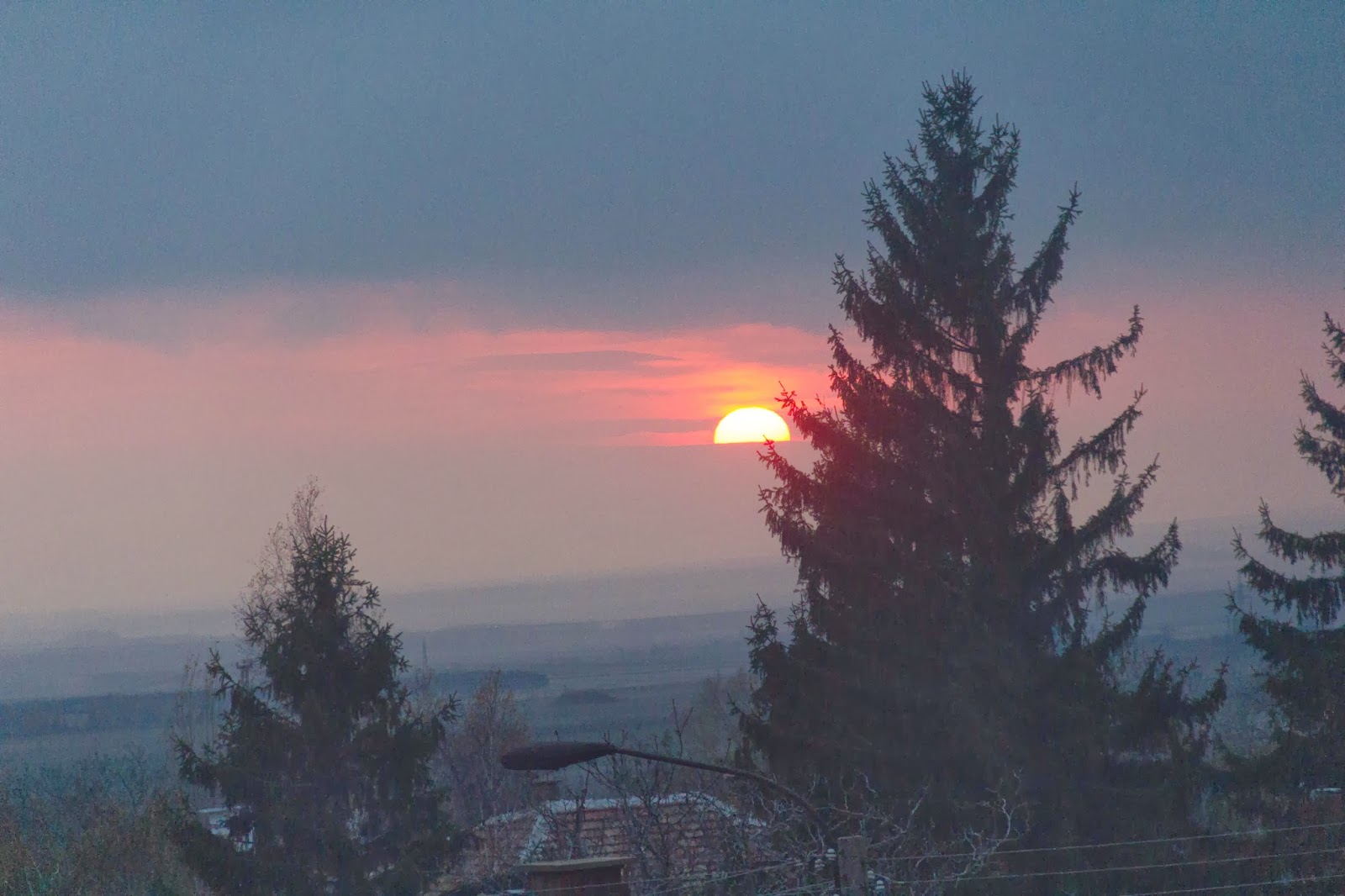 The regular bus which only goes half way took off once I decided to get it – it had been sitting there with its door closed for ten minutes before – so I wandered down the road in search of another. I passed a million taxi drivers on the way, ignored them all. Taxi drivers are as bad as bankers or politicians – they’ll shaft you every time. 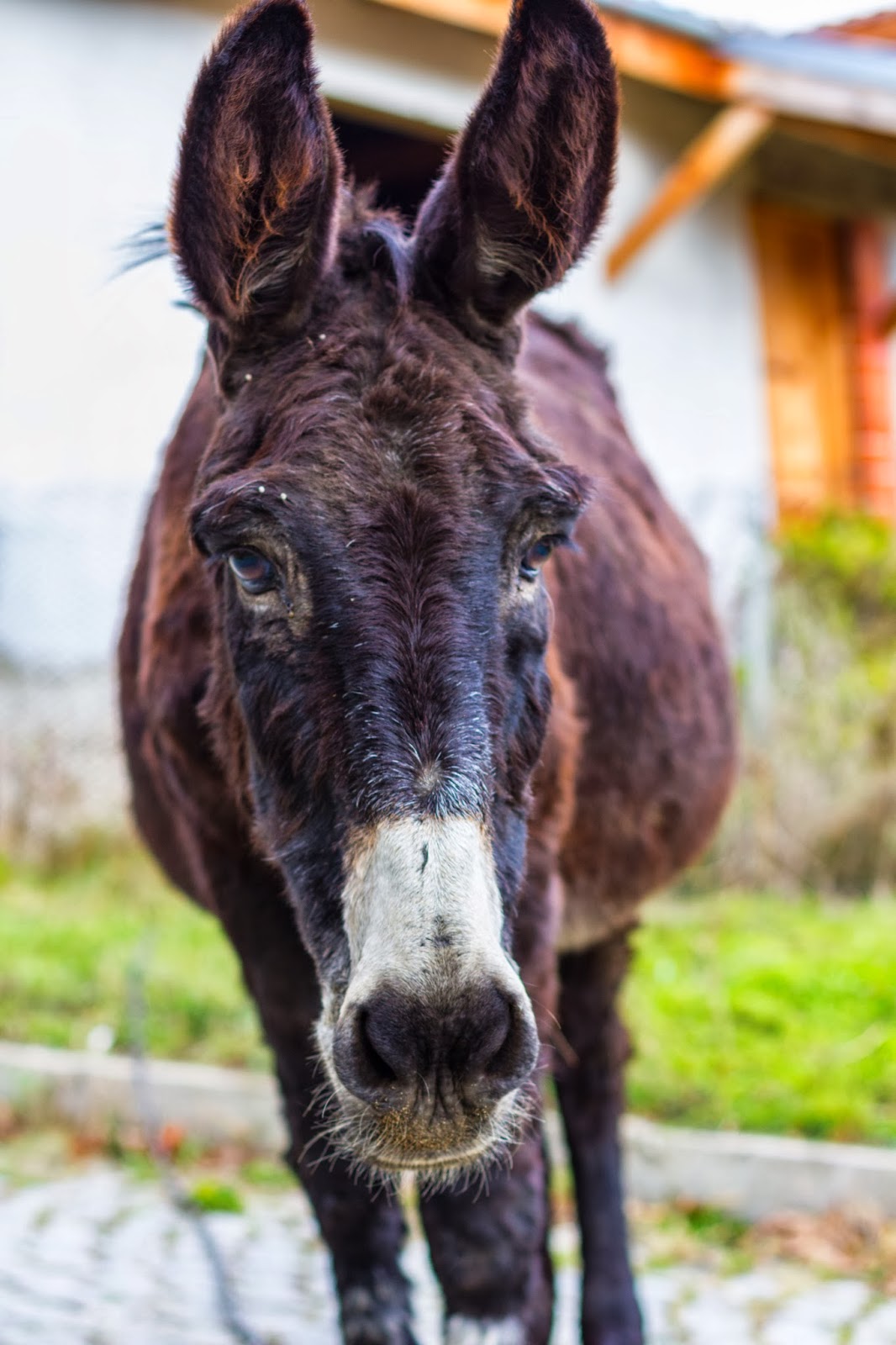 After half an hour of wandrin’, another bus passed me by. Bollocks. I decided it was probably best to wait at a bus stop for the next one. After all, I had no idea where I was going.
The bus was crowded when it arrived and crowdeder once I squeezed on. The smells onboard were authentic, rural, rustic, pungent. I had someone’s foot in my face and I could still get the other smells. 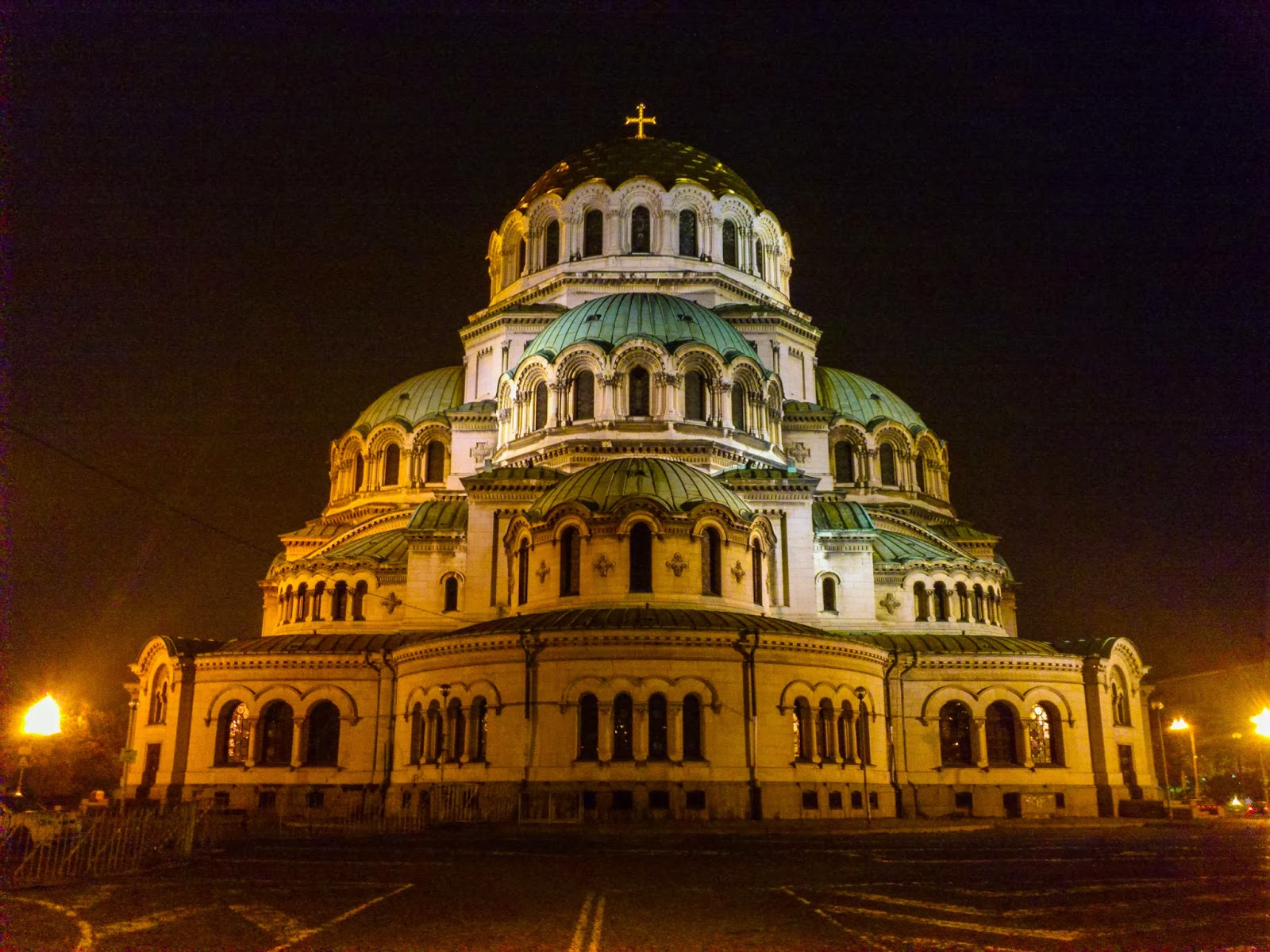 Oul’ grannies nattered away among themselves in what I can only presume was Bulgarian. Three French girls also got on. I know this because they were speaking French. I almost felt we were related, so alien was everything else around me. 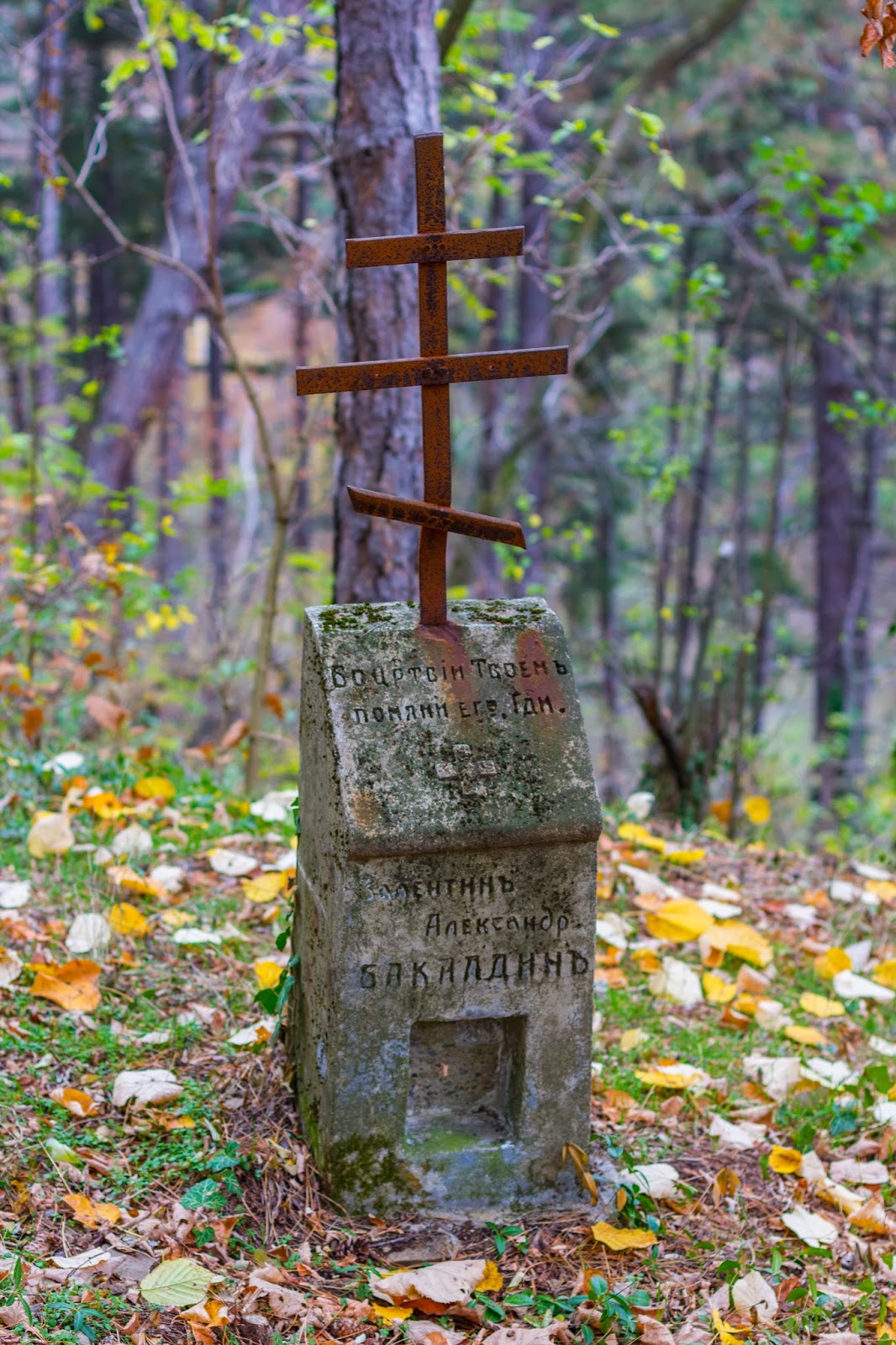 The writing is the killer in Bulgaria. Everything’s in Cyrillic so it’s next to impossible to decipher anything. Once the bus stopped I asked one of the French girls where the metro stop was. She pointed me in the right direction.
Then I’d to try figure out which stop was the center. I made an educated guess before getting out at Сердика and spending hours wandering around looking for my hostel, eventually finding it on Дондуков. The guidebook was no help, with all its maps and addresses in another script… 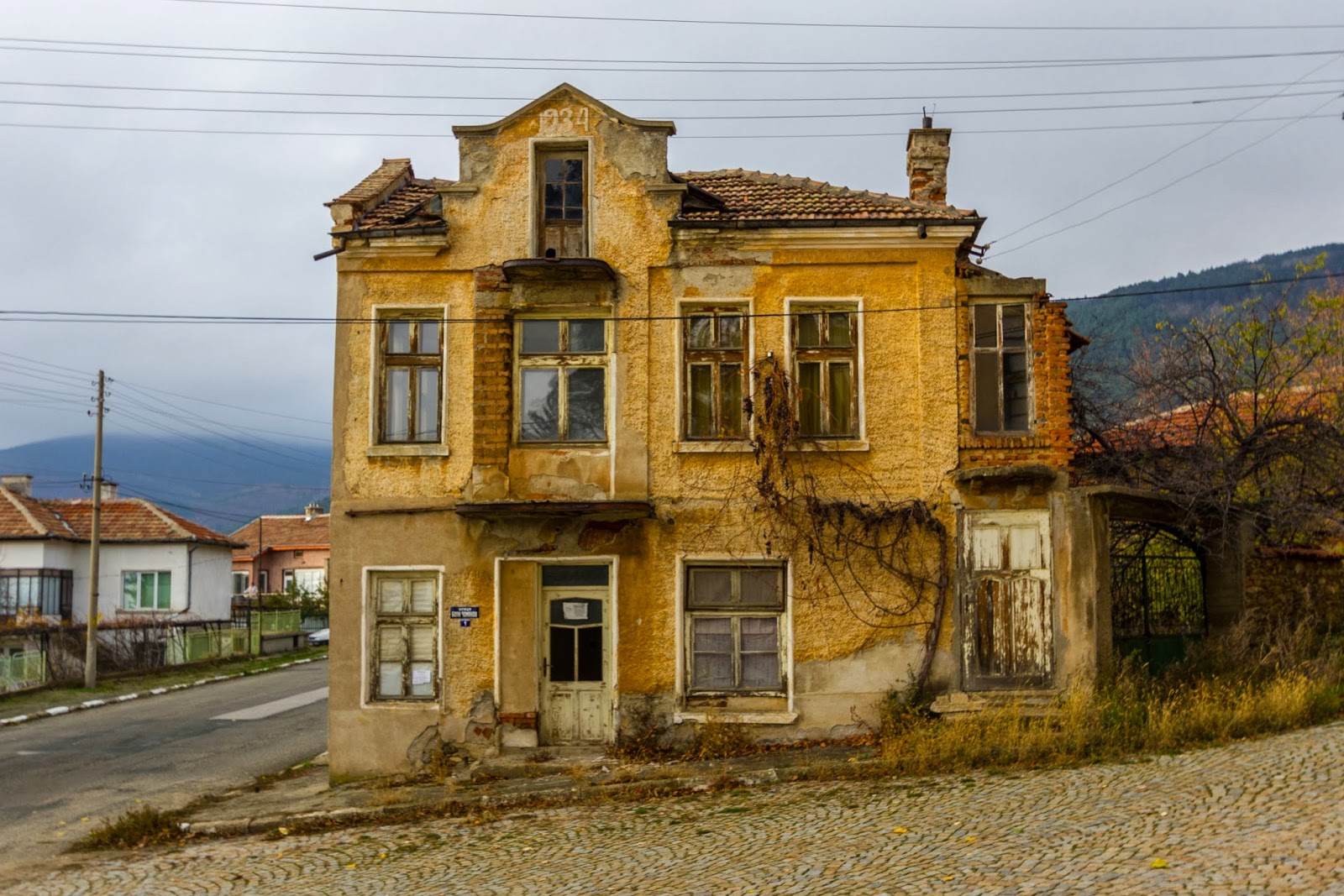 Not much could be garnered from the little bit of Sofia I saw, but it seemed interesting enough. There were plenty of grand fuckoff buildings in the center, heralding a time of former glory, or attempting to at least…
There was either loads of money on show or none at all – nothing in between the very poor and the blatantly rich. Flashy cars, swanky bars and tacky nightclubs attested to the latter. Definitely a case of more money than taste. 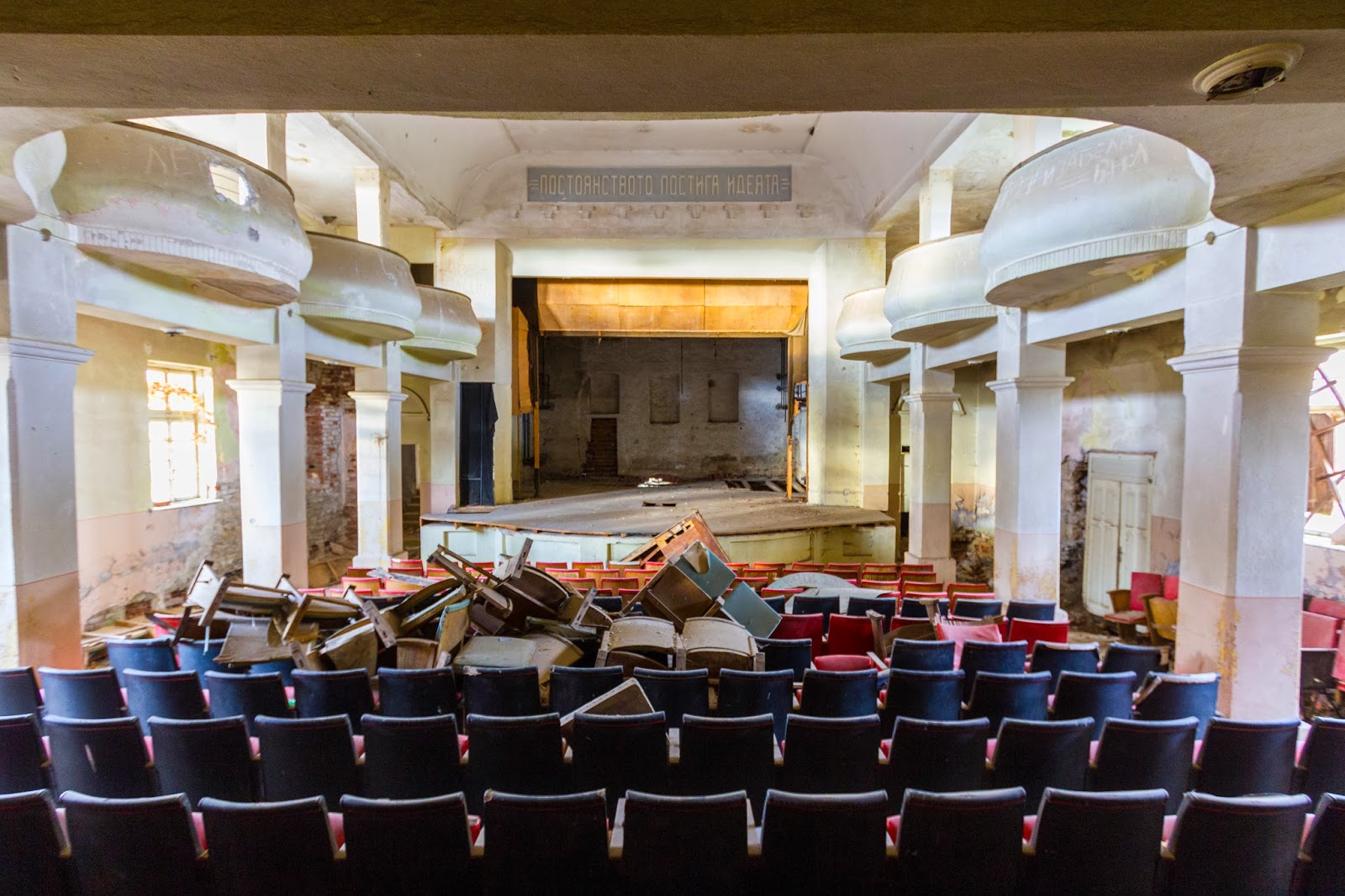 Otherwise the smell of poverty pervades the streets and especially the buses. Buildings are worn down, crumbling, battered looking – authentic. 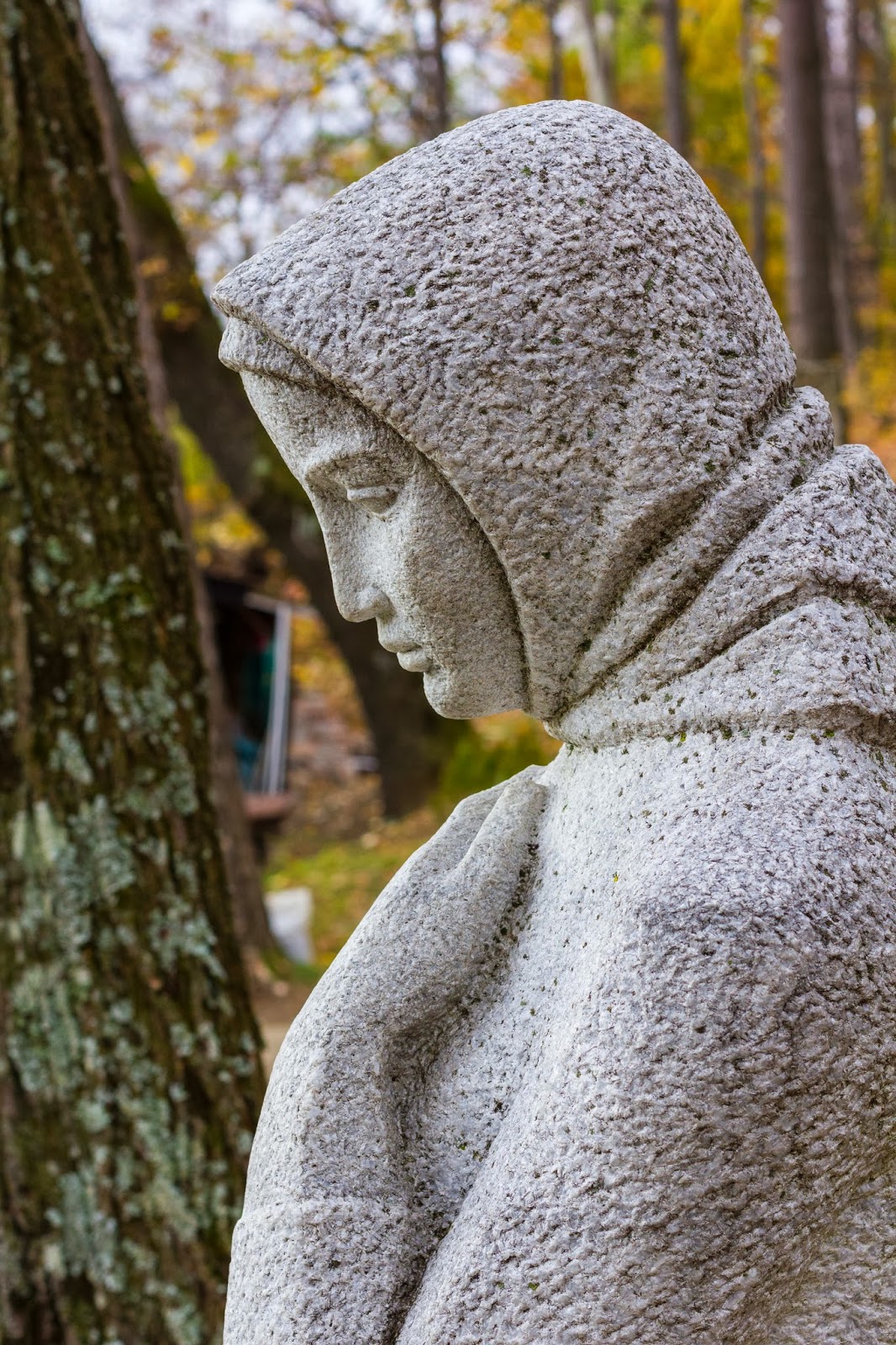 Apparently there are loads of stray dogs in the city, wandering around in packs and attacking people from time to time. (According to the guidebook, so perhaps this should be taken with a grain of salt.) I only saw one dog and he looked like he knew exactly where he was going. Very determined. He didn’t stop.
The Alexander Nevsky Cathedral was quite impressive but I didn’t have time for proper sightseeing. I was on a mission!
The mission went well, as I’ve written already. Shipka, my base, was very nice. There’s nothing going on in it. I went out for a stroll on my first night and promptly found an abandoned theater and an abandoned house. There were loads of other abandoned buildings around too, as I was to find out subsequently. 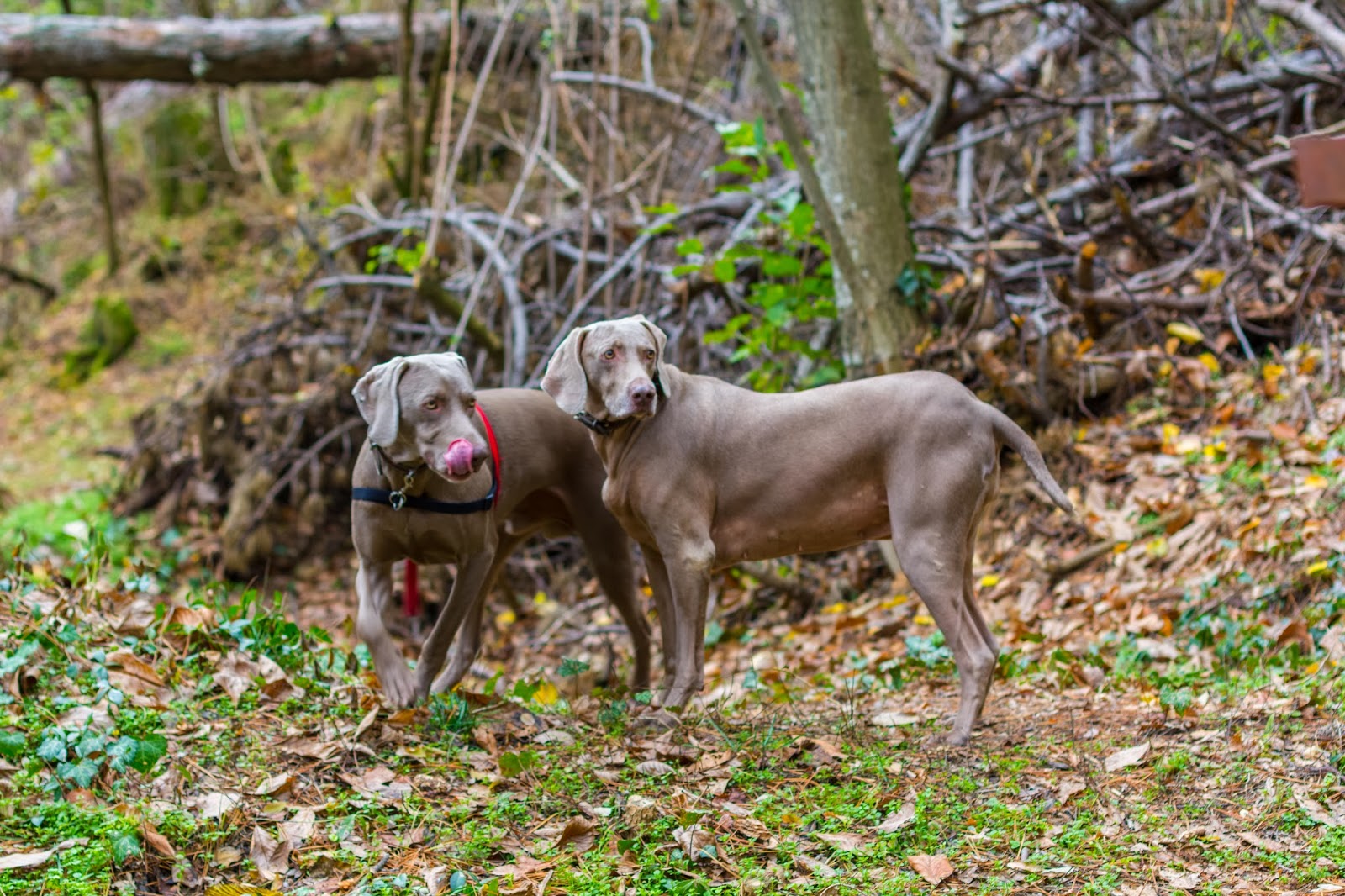 I was the only guest in the hotel for two of the three nights so I felt guilty eating alone in the restaurant, keeping the woman from having the nights off for herself. They told me to have breakfast “as late as possible.” The wine was lovely. 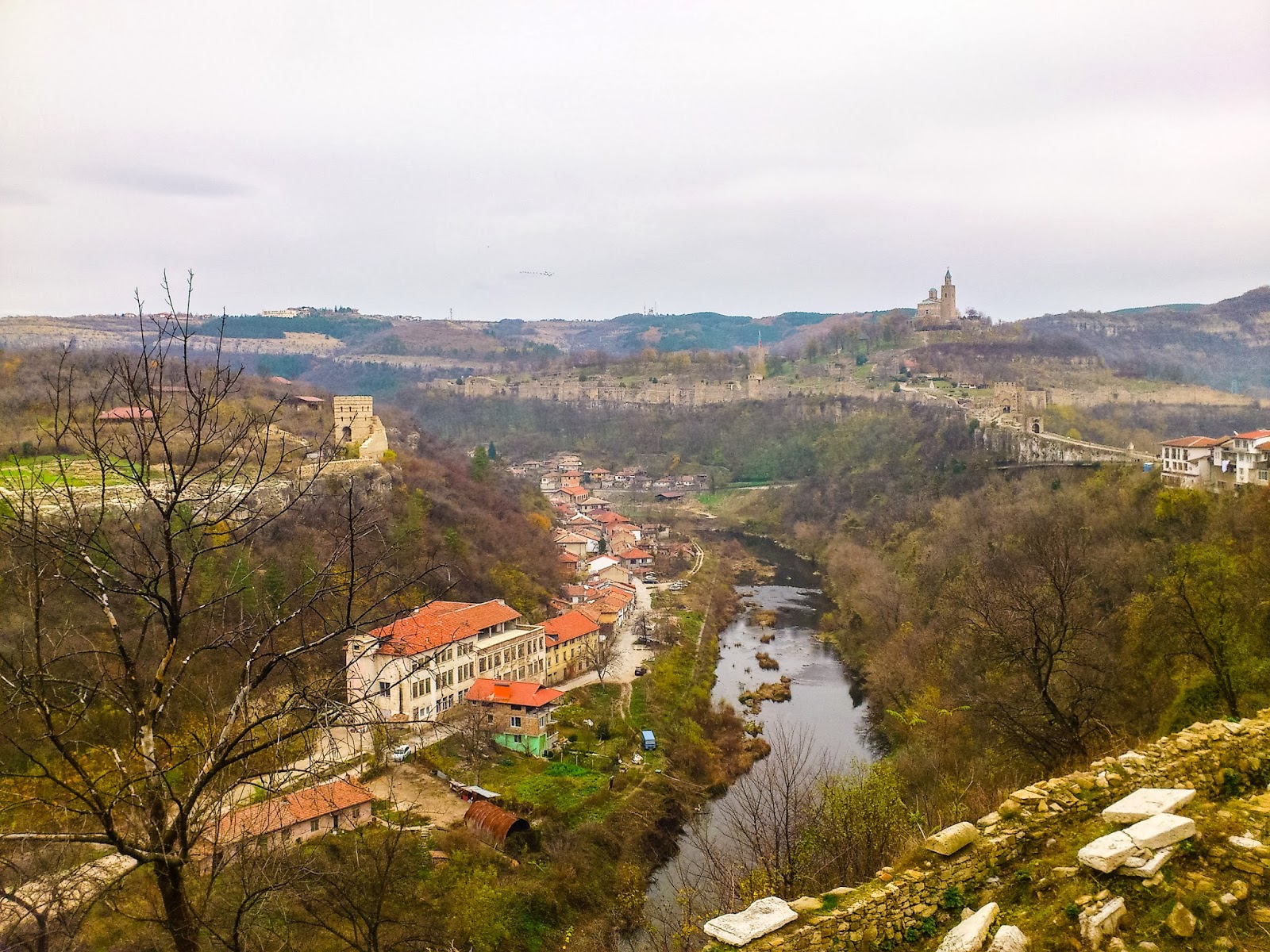 But the countryside is the thing. The mountains are great, unspoilt, wild, home to loads of wildlife which may or may not include bears and wolves. Apparently they were in “other mountains” but Ivan told me of one fella in the village who said he was attacked by wolves and had the scars across his body to prove it. Nobody believed him because he drank so much, but from what I could tell they ALL drink so much, so it’s hard to know who to believe or not. 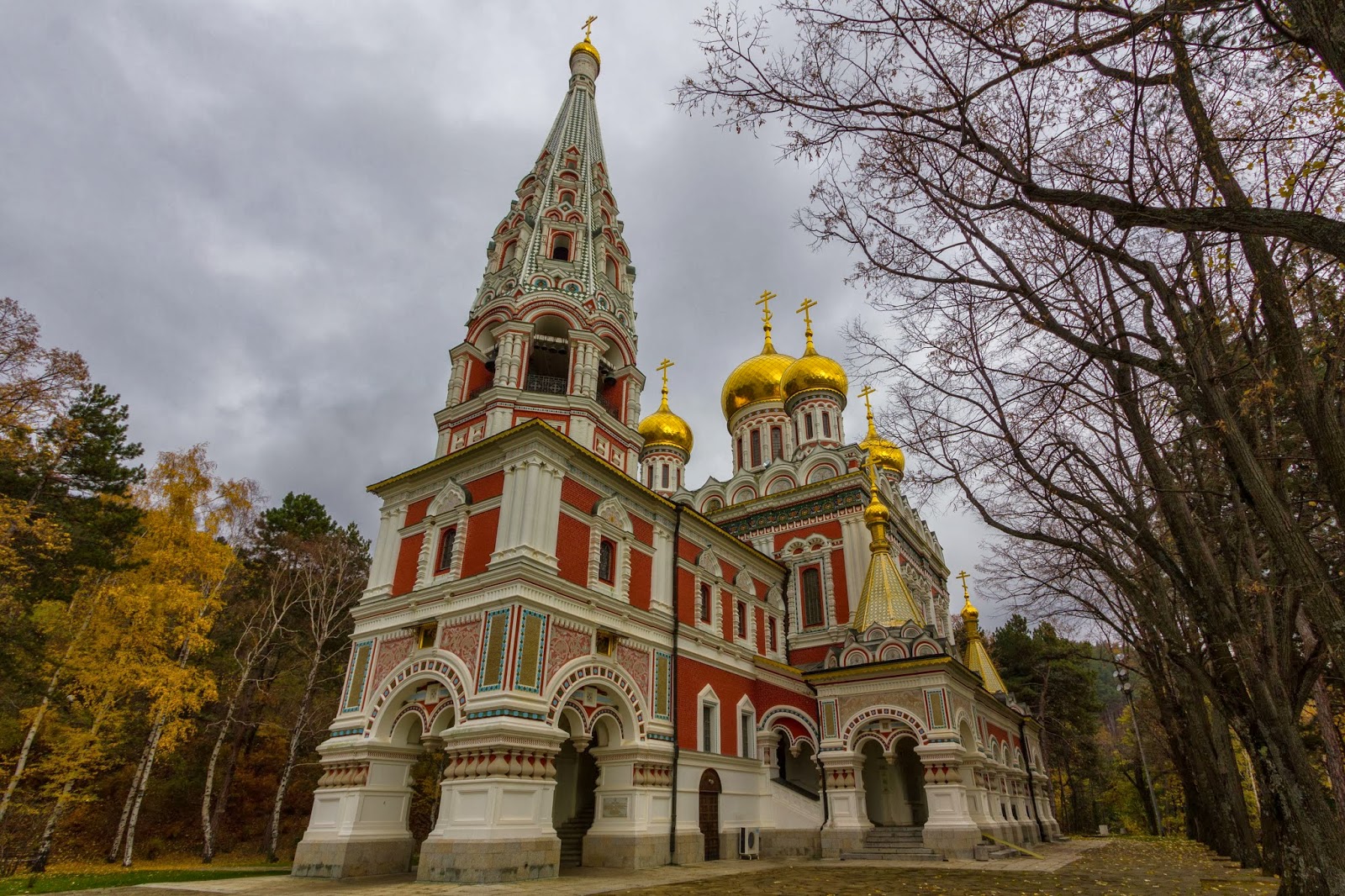 Shipka’s main attraction is the picturesque Russian church (unless you count the abandoned theater). It has great golden onions on the roof, and can be seen for miles around. In fact, it was the sight of the onions on my way back from Buzludzha through the forest that finally let me know that I was on the right track. 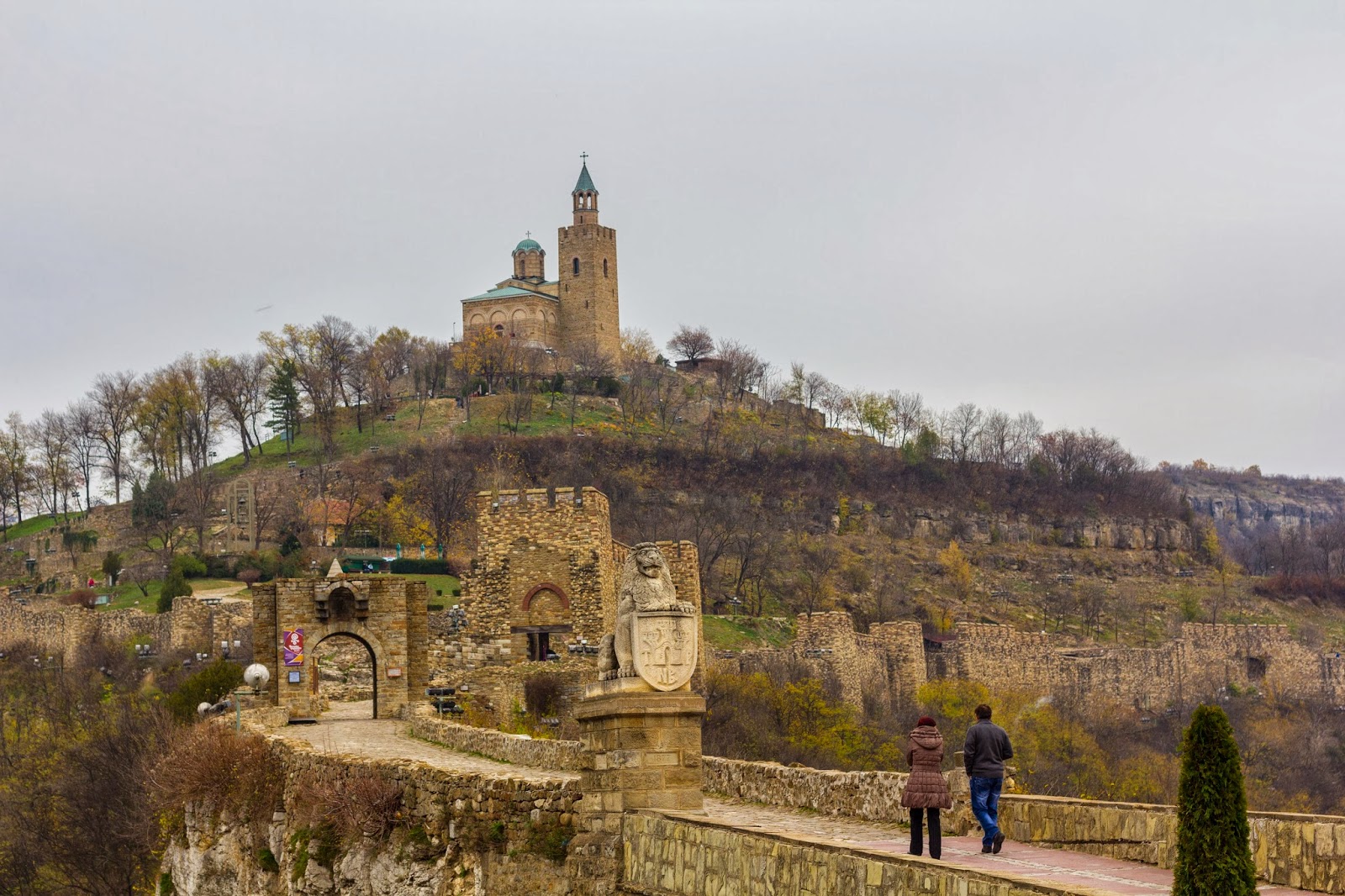 I decided to go to Veliko Tarnovo from Shipka. Time hasn’t been kind to the former capital though. It’s in a great natural setting on a rocky outcrop by the river, but now it’s just a town of souvenir shops and real estate agents flogging property to foreigners who don’t know what to do with their money. There were nearly as many property speculators as tourist shops, all advertising their offers in English.
I should have skipped Veliko Tarnovo and stayed in Shipka another day instead. Shipka was great. When I came out the abandoned theater, an old woman walked by on the road with a herd of seven goats. That’s Bulgaria. 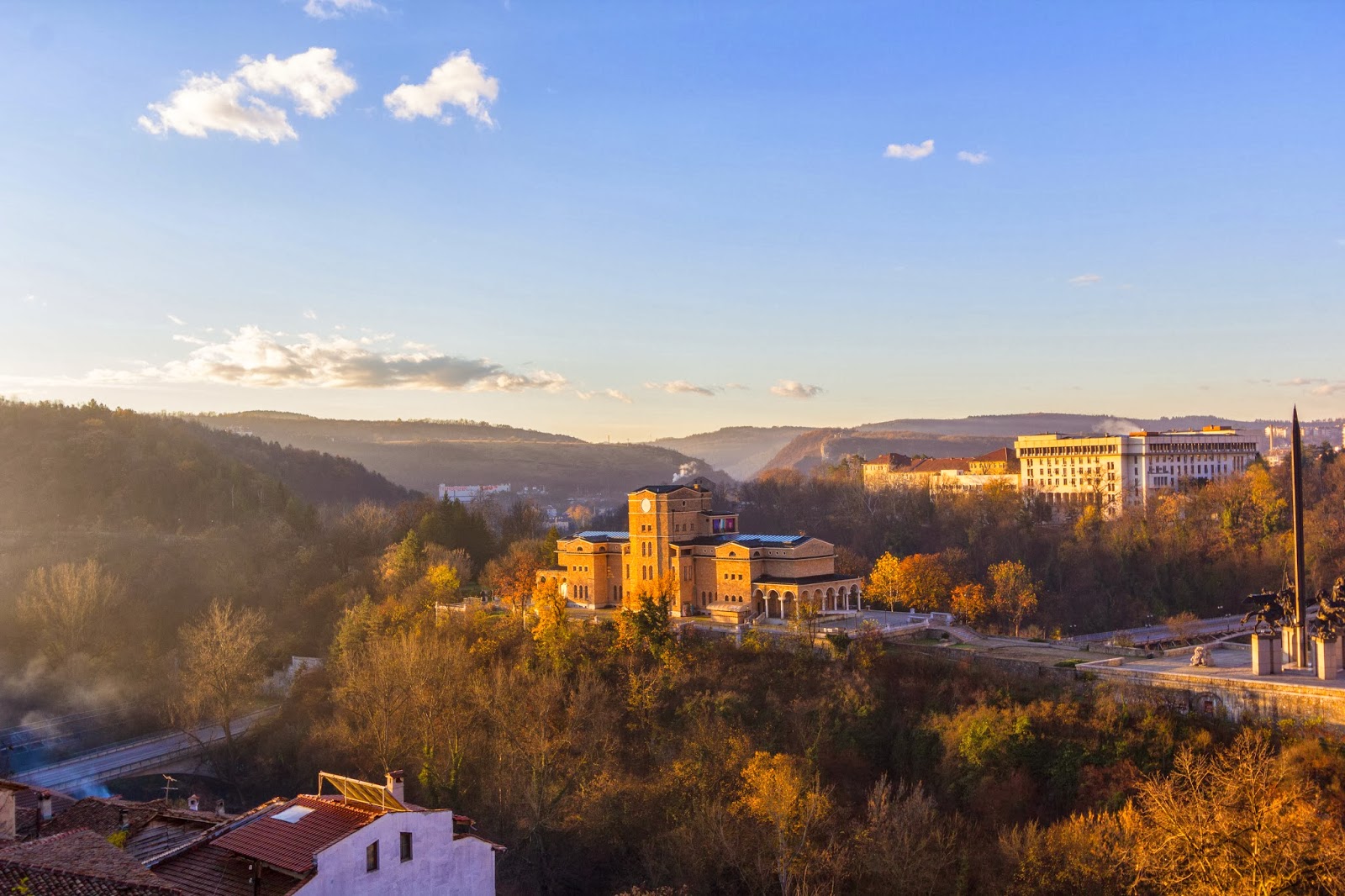