So much for saving the East Side Gallery 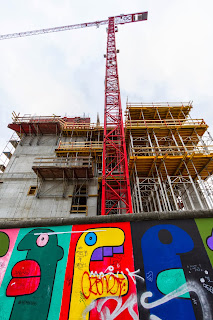 Last Sunday I went to a demo to save the East Side Gallery. I was too late however. The demo was the day before.
Turns out that was probably too late too. Construction of the 14-storey apartment block is very much underway, and it already looms over the “protected” monument that they cut through for building access.
I’ve written about East Side Gallery before. My feelings are well known. 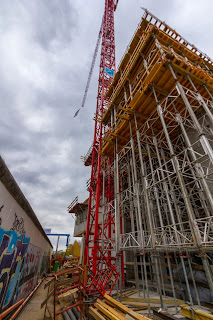 Even if you overlook the fact that another part of Berlin’s history, a major tourist attraction, is being damaged for short-term gain (and whose exactly?), the city has made a monumental fuck-up by allowing these monstrosities be built by the riverside. Maik Uwe Hinkel’s luxury apartment block won’t be the only eyesore blocking what should be a public amenity.
Crown eyesore among them is the O2 Arena which commands attention along the whole riverside at night with its obtrusive giant illuminated advertising hoarding. Its ads are a who’s who of evil multinational corporations – Coca-Cola, McDonalds, BMW et al. They’re impossible to avoid as they force their way into your line of sight even if you try look the other way. 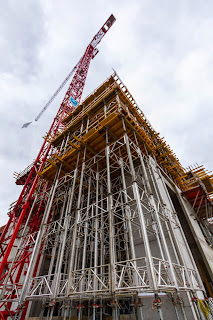 So in short, the whole area is already fucked. Maybe Hinkel’s luxury apartment block can’t make it any worse. He plans to open a café at the bottom so the very tourists whose attraction he has damaged can be ripped off after they’ve taken their snaps of what remains of it. 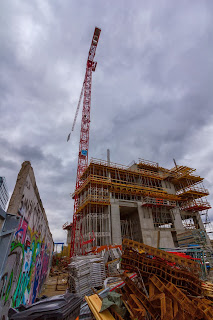 Yesterday it was confirmed Hinkel worked as an “unofficial employee” of the Stasi from 1982. He brought legal proceedings in an attempt to prevent the Superillu newspaper from publishing details from file XVIII-1493/82 but his arguments were thrown out by the court.
The file has plenty of reports of Hinkel grassing out college mates, neighbors and visitors from West Germany, and his briefings to the Stasi led to the arrest and conviction of a married couple and a student for "propaganda against the state" in September 1985.
None of this changes anything of course. It has no bearing on the East Side Gallery. All it does is confirm the type of person Hinkel was. But we already knew that. 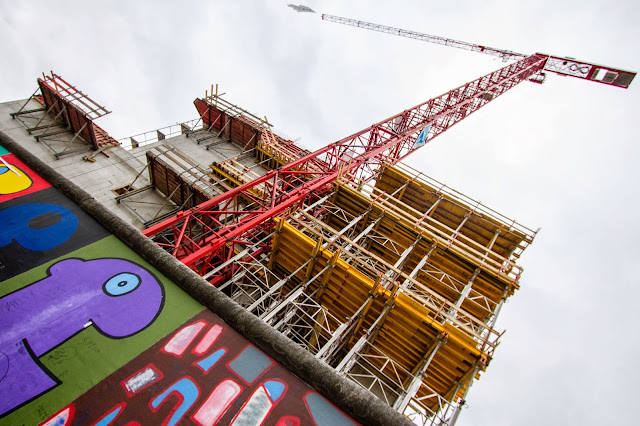