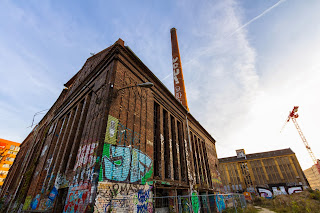 As the nights turn chilly, the ice factory’s coolness is paradoxically cooling. Not only is it getting too damn cold to sit on the rooftop and drink a beer, but the view is compromised by new apartments springing up beside the river. 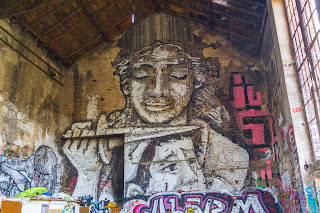 Apart from the fact there’s nothing much of the original factory still to see – the insides are gutted but for the remains of the iconic machine with the giant wheel – the entire thing smells of piss, is overrun with rodents and even the street art no longer seems to be of a quality it once was. Perhaps I went back on a bad day... 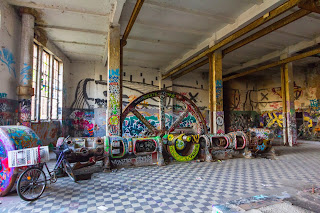 Last month a group of around 20 youths who wanted to hold a party here got a nasty surprise when they were confronted by two men and two women. One of the men had an iron bar, and the victims were apparently dragged to the roof where they were beaten. Three girls and four guys received head and body injuries before the alarm was raised.
Three of the perpetrators were arrested, the women 37 and 40, and a 40-year-old man, all from Bulgaria. They face charges of causing grievous bodily harm. The guy with the iron bar got away. 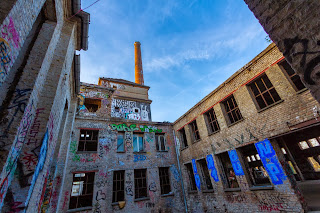 But it turns out they weren’t squatters as initially thought. I presumed they were people living there who had been disturbed by the raucous party animals but no – not according to the Polizei. So the circumstances behind the attack remain unclear.
There are squatters living at the Eisfabrik as I wrote before, both of a German variety and an East European one. My general approach to squatters is to leave them the hell alone – I wouldn’t like people coming in and wandering around my house unannounced – but some of the Eisfabrik inhabitants are turning the building’s popularity to their advantage. 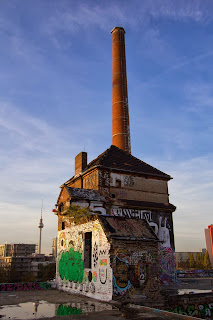 When I walked in last Friday there was a dude sitting on a chair with a cup chatting to another sitting on another chair. I went past and took photos of the machine with the giant wheel and when I was I was going back outside, the dude asked for money. He was begging really. I shook my head, didn’t give him anything and walked on.
I briefly roamed around the rest of the building, noted some of the best artwork had been painted over with inferior stuff, the new apartments blocking the view from the roof, and made by way back out – it was Hallowe’en and I had other places to go.
As I was leaving a group of three tourists arrived and the dude started shaking his cup with authority, demanding money for entrance. The tourists looked at each other in alarm and yanked their wallets out, throwing money at the guy to appease him. 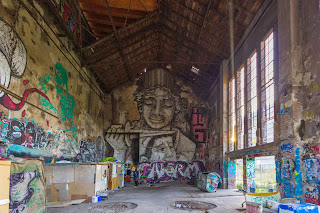 Now, I’m not saying he doesn’t have the right to beg for money, but of course he doesn’t own the Eisfabrik and he has no right to charge admission. He’s just another in this city making money however he can. He’s certainly not as bad as the fuckers charging admission to Teufelsberg – they have hired goons to ensure people pay.
It’s still worth a visit if you haven’t been before. The Eisfabrik is easily accessible, some of the artwork is fantastic, and it’s certainly an experience to experience. It ain’t as cool as it used to be but hey, that’s a given for a former ice factory.

This post originally appeared on the Abandoned Berlin site, where it can be viewed again if you want to click on the images to see them in a fancy photo-viewer thing. 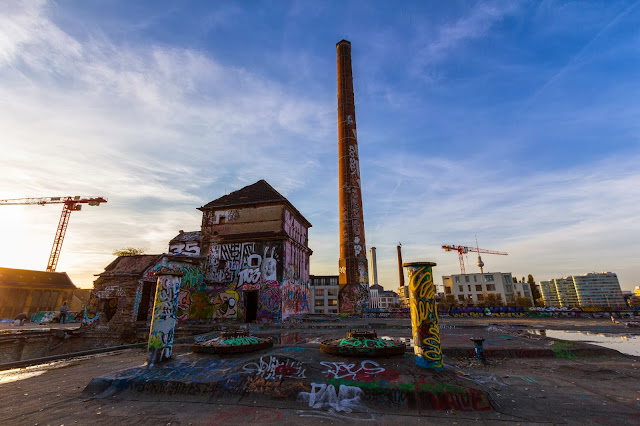