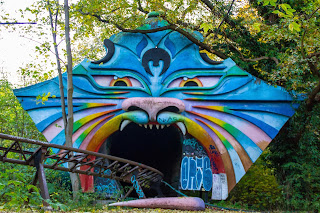 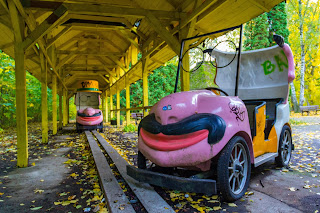 Spreepark can only be described as a wonderland, as, indeed, you’d expect an abandoned amusement park to be. An increase in the number of visitors to levels not seen since it earned its living as an actual amusement park has hardened resolve to keep them out – unless they pay.
That in turn hardened my resolve to get in again. I hopped the fence, made my way through the foliage as I’d done before. This time however, I avoided the main paths, stayed among the trees. 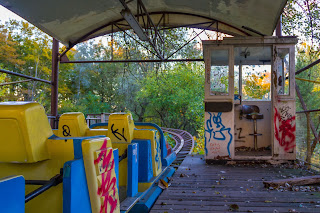 Once I’d made my way through the dogs started barking. Fuck! But I thought to myself they couldn’t know if I was inside or out. They probably barked all the time. I had to go on. I went on, hoping to Jaysus they weren’t loose.
I heard weird sounds, weird sounds inside the goldmine. A grating, screeching noise, a siren, possibly an alarm. Had I triggered something by hopping the fence? I had to go on.
I made my way to the rollercoaster, greeted the colorful giant cat.
“Howya cat! Long time no see! I trust you’re not as lonely as you were before?”
He said business was brisk, no end to the visitors. 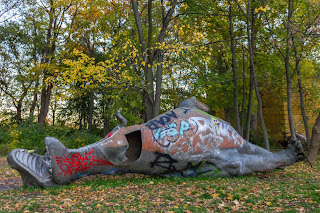 The dinosaurs were less chatty, possibly because their numbers had dwindled since before. Those remaining couldn’t even stand up anymore. They’d obviously turned to drink. Tragic. Thoughts of extinction can really get a dinosaur down.
I wandered on, up toward the giant Ferris wheel. The screeching grew louder as I drew near and it was then I realized – it was rusty, and turning in the wind! I gazed on in humble awe. Despite everything, the wheel was still turning. No matter what, the world keeps turning. It might screech, but it turns all the same. 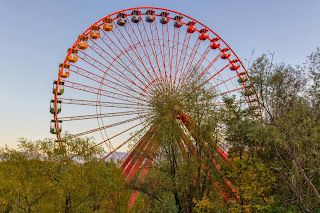 Suddenly I knew I had to leave. I don’t know if I heard something, something strange(r). I turned around, cut back up through the grass on the hill.
Sure enough, a man’s voice called out. “HALT!”
I looked back, saw he was on bike. No dog. I can’t outrun a bike. I went over.
I refused to delete my photos as he demanded, despite the implicit threat of violence in his stance, despite his threat of ringing the police, a criminal record and €150 fine.
He rang someone, said something about five minutes, told me they were on their way, and I’d have to delete the photos anyway. 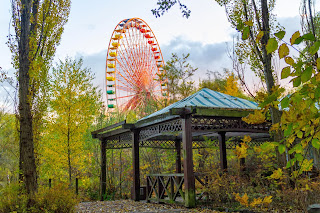 I won’t delete photos unless there’s gunpoint, with real guns and bullets. I dug my heels in as he asked again and again, braced myself. He gave up, asked for ID. I showed him my press pass, which he took photos of before telling me to expect the fine in the post and hop back out over the fence.
As I was leaving he called me back, asked if I’d pay €25 for photo rights. I’d already tried bribing the fucker, so said yeah, as long as it cancelled the €150 fine and criminal record. He said it would. I suppose I’ll find out. 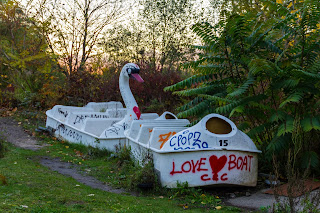 On our way back to the guardhouse I asked him if Herr Witte, the chancer who used to run the amusement park, was still living onsite.
“Nein,” he replied.
Another guard came along during the ubiquitous form-filling, clearly in a better mood. I think he was drunk, probably from hanging out too long with the dinosaurs. He was very friendly.
I asked the original guard if they got many people hopping the fence. 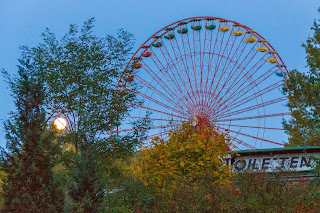 “No comment,” he said.
“Eine Menge,” said the other. (Loads.)
I took a few more snaps of relocated dinosaurs on the way out. Their days are numbered it seems, and pending its sale to the city’s preferred bidder, Spreepark’s days are too.
I recommend a visit soon, either of the more exciting do-it-yourself variety (the worst that will happen is you get caught) or by doing a tour as others have suggested. Tours might be better for those of a nervous disposition.
I won’t be doing a tour but I will go back. I have to go back.

This post originally appeared on the Abandoned Berlin site, where it can be viewed again if you want to click on the images to see them in a fancy photo-viewer thing. 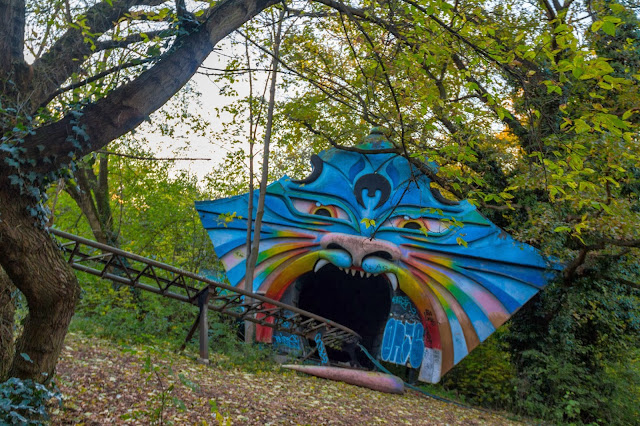