Ballhaus Grünau: When the music's over 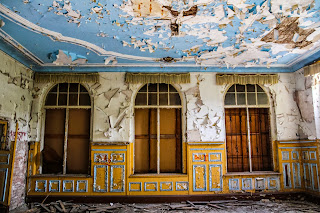 When the music’s over turn out the lights. For the music is your special friend, dance on fire as it intends. Music is your only friend, until the end. Until the end.
Well, I’m sorry to report it is the end – the end of Grünau’s famous dance halls, the Ballhaus Riviera and Gesellschaftshaus Grünau. Every friend has left, music included, the lights have been smashed, and the last dance is but a distant fading memory. 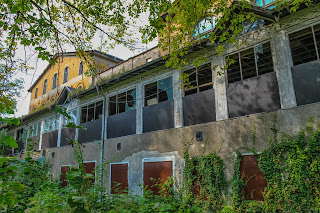 Now the Dahme flows sadly by, lapping the “Riviera” as if prodding a carcass for signs of life. There are none. Only the corpse is left, and very soon, it seems, that will be gone too. 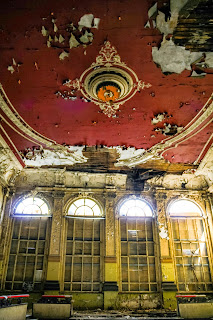 It’s been 22 years since the last dance. The first was in 1890. That’s when Ballhaus Riviera was built – a dance hall with several other rooms and a palm-lined outdoor restaurant on a terrace beside the river – at a time when Grünau was a happening place and hot destination for Berlin’s movers and shakers. 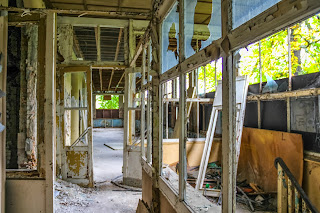 Grünau was renowned for its watersports, particularly after June 27, 1880, when three local rowing clubs came together to hold the first Grünau Regatta. It was such a success, that the second, called the Großen Grünauer Regatta, followed in September 1881, and they continued yearly after that, drawing crowds of up to 50,000 people on good days. 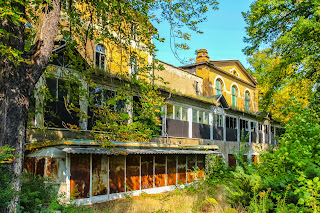 With all the festivities, of course there was call for dancing and merrymaking! The Ballhaus was immensely popular. Musicians were honored to come and play there.
The Gesellschaftshaus (social house) with 9-meter high ballroom and other rooms was built in 1897/98 and together with the Ballhaus, they turned Grünau into a magnet for partygoers and revelers from far and wide. Germans love their dancing. It was no different then. 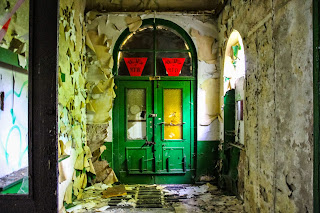 The watersports continued, of course. The area received a massive boost with the Olympic Games in 1936, for which more facilities were built, but that’s a whole other story… 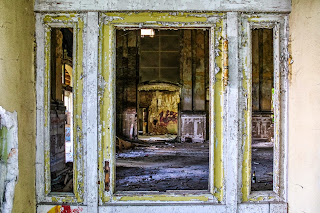 The Ballhaus and Gesellschaftshaus continued their important role in Grünau’s social fabric throughout the DDR and the buildings were even given protected status in 1977. However, the glory days were already part of a bygone era by the time the ‘80s rolled around, with discos rather than ballroom dances taking center stage. 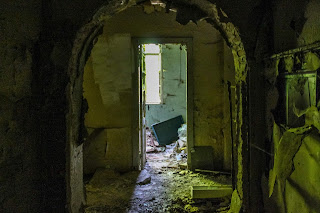 German Reunification in 1990 spelled the end, killing the DJ, and both Ballhaus and Gesellschaftshaus were shut down the following year. Treuhand, the state company responsible for privatizing East German enterprises after Mauerfall, seized control and attempted to find a solution. 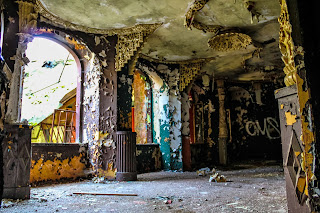 Various investors came with plans to build apartments but these were rejected by the city. Meanwhile, the “Kavaliershaus” was demolished in 1999.
The Ballhaus’ and Gesellschaftshaus’ fate was still unclear when another crowd opened a Biergarten on the land in August 2000. It didn’t last long, closing in October, though it did well to stay open that long, I suppose. 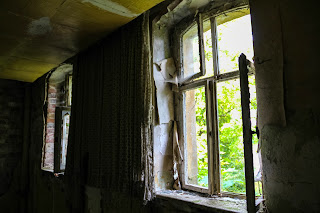 The buildings were already being vandalized and thrashed when Treuhand announced they’d be demolished but for the large ballroom and façade. In the end they sold the whole lot in 2006 to an investor from Ankara, Turkey, under the impression she wanted to build a hotel there. 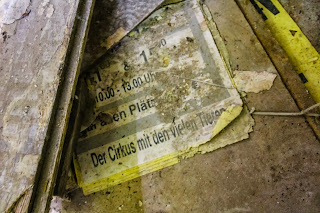 More ideas followed, an old folks’ home for one, before your wan from Ankara came back with another plan to build apartments. This too was turned down.
Locals fear the owner is simply waiting for the whole lot to fall down or be burned to the ground so there’s nothing left to protect anymore and she can go ahead and build her lucrative apartments. 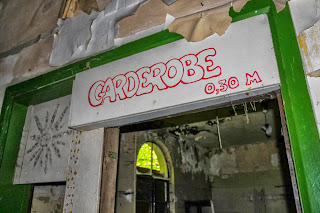 It’s in a sorry state now, seriously dilapidated, yet the former splendor still manages to shine through. Just. The stages, backstage, dressing rooms, floors and walls and all you’d expect to find in a ballroom are still there, but the chandeliers and fancy trimmings are all gone the way of the dancers. 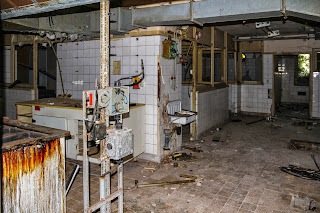 Any dancing now would bring the place down. I was afraid to sneeze in case it all came crashing around me. Several floors and parts of the roof had collapsed in both buildings.
Nazi scumbags had also left their mark, scrawling their mottos on the walls, with Antifa leaving their retorts. I had a heart-in-mouth moment when a rolled-up carpet looked like a propped-up body. This is the place for props alright. 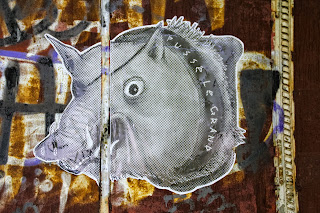 The ballrooms must have been quite something in their heyday.
“Es war wunderschön!” said an old woman I met outside when I hopped back over the fence. She had learned to dance here in the ‘50s. She said Ballhaus Riviera was open to all, with dances ongoing on weekday afternoons too. She also said a Berlin school of ballet performed in the Gesellschaftshaus, though I couldn’t find any corroborating evidence. 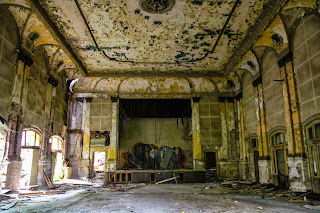 But she talked and talked with genuine affection. Her love for the place had not deteriorated, even if its condition has.
Last month, concerned residents sent an open letter to the owner’s legal representative in Potsdam, demanding that steps be taken to protect the buildings from fire, vandalism and weather, and that they finally get up off their arses and do something with the premises. Apparently other investors are willing to build a hotel there, salvaging some use from what was once the pride of the area.
Campaigners have gathered 3,000 signatures in an effort to save it. Will there be one more dance? 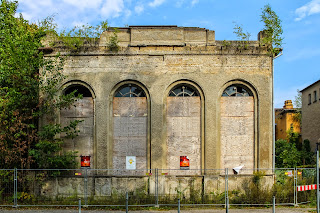 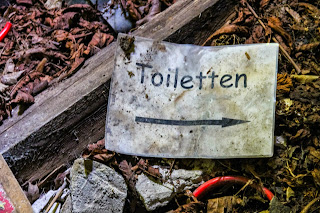 Grünau’s twin dance halls Ballhaus Riviera and Gesellschaftshaus Grünau, collectively known by some as Ballhaus Grünau, though there were two. There still are two, albeit in nothing like anything approaching their former glory. Abandoned, left to rot, and abused – it’s a sorry end for what once drew crowds from far and wide.

Where
Regattastraße 161 & 167, Grünau, 12527 Berlin. (The numbers might be one or two out, but if you aim for the numbers given, you’ll get there. I assume nobody wants the postal address at this stage.) 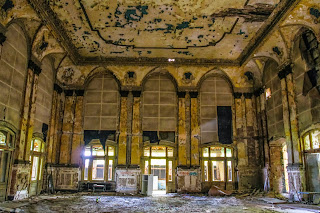 The S8 and S46 go straight to Grünau S-Bahnhof. From there walk (or cycle) straight down the appropriately named Wassersportallee toward the river, turn right at Regattastraße (not left, like I did) and the dance hall buildings are up on the left. You can’t miss them. They’re the rusty, crumbling, overgrown, boarded up, suspiciously abandoned-looking buildings. Here’s a map, to make it even easier. 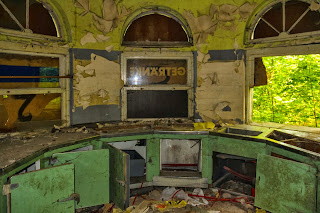 I walked past the buildings and hopped the fence on the far side, then walked to the back (by the river) and found it very easy to get into the Gesellschaftshaus building from there. The other building was similarly easy, though I had to hop in over a windowsill where part of the roof had already collapsed and the rest looked like it could fall any minute.

When to go
Go during daylight hours so you can see where you’re going and are less likely to be killed. These are not the safest buildings in Berlin. 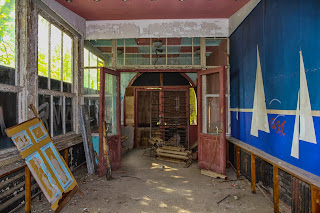 Difficulty rating
4/10. It’s pretty easy to get to, and not to hard to hop over the fence outside. There’s no security and I guess the locals are more than used to people visiting. However, the buildings are in a very bad way, among the worst I’ve seen (though not the worst) and care is needed on weak floors and saggy roofs. 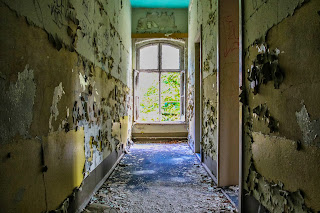 If you really, really want to dance, and you’re stone crazy, then by all means bring your partner along for a twirl. You’ll have to hum your own music, ignore the swastikas and smell of piss, but if you can do that it could be very romantic indeed. 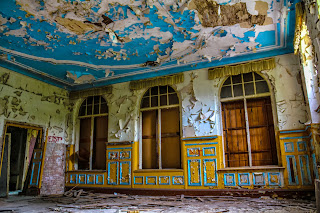 What to bring
Camera, beer, good torch for exploring the basement, dancing partner.

Dangers
As mentioned before, the biggest danger is the poor condition of the buildings. Great care is needed, especially if venturing upstairs in the Riviera building. Really, I wouldn’t recommend it, because when I was tiptoeing up the stairs, I was keenly aware they could collapse any second. I kept going despite my better judgment, but perhaps the stairs have collapsed since and it’s no longer an issue. 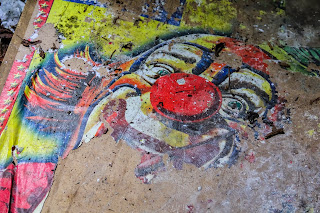 The owners seem happy for the whole place to fall to the ground, so I guess you should watch out for that. Do not take any stupid risks or you may live to regret them (if you’re lucky).
Watch out for Nazis too – they seem to like spraying their offensive signs around, marking their territory like dogs pissing on lampposts. If the dogs would piss on Nazis instead, the world would be a much better place.

This originally appeared on the Abandoned Berlin site a week or so ago. I neglected to post it here in my rush to publish on the snazzy newly designed site. Check it out if you haven’t already! In any case, I recommend checking out this post there, as you can click on the pictures and enlarge them for a proper gawk: http://www.abandonedberlin.com/2013/10/ballhaus-grunau-abandoned-ballroom.html 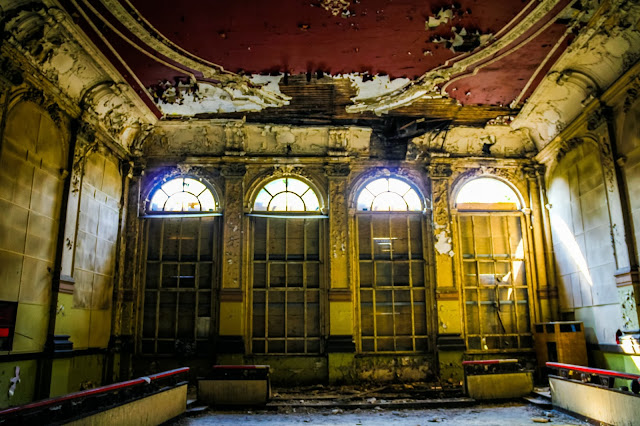