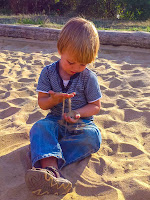 It’s slightly devastating to pick up your kid from Kita only for him to burst into tears the moment he sees you. Evidently the new family arrangement isn’t as much to his liking as first thought.
It’s only slightly devastating because I know he still likes me – he gave me a kiss for no reason at all last week, he hugs me tightly every so often and obviously enjoys our time together – but it’s nevertheless heartbreaking to know the mere sight of me when I go to pick him up reminds him of the sadness he’s feeling.
While he seems happy to have two houses and another place to call home, he clearly wants the three of us to be together in one place at one time.

If he sees animals in a book – sheep for example – he’ll point out the mother and father sheep as well as the Fionnito sheep.
When he’s with me, he’ll ask where Jenny is from time to time. He seems happy enough when I tell him she’s working, but the fact he keeps asking for her seems to indicate an uncertainty, a lack of security. Perhaps the fear he might not see her is weighing heavily on his little heart. 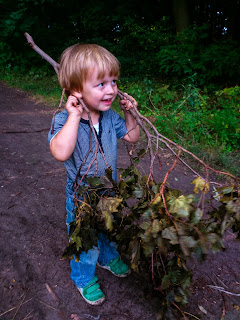 When she is there, he doesn’t want me to go. I don’t know how he is when I amn’t there.
His moods and humor seem to swing wildly. If something’s wrong, he’ll burst into tears and cry loudly, head back theatrically as if given the worst possible news he’s ever heard. He might throw himself on the floor like he did the last two times I picked him up from Kita.
But he can snap out of it straight away, and a minute later he’ll be singing and yabbering away and full of joie de vivre.
It’s worrying. I hate to see him sad, the mood swings aren’t healthy, and it’s even worse to know we are the source of his sadness. I hope he can adjust to the new set-up sooner rather than later.
No family’s perfect, but most two-year-olds don’t have to deal with that realization. 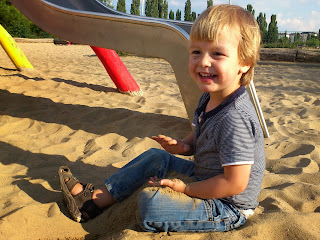