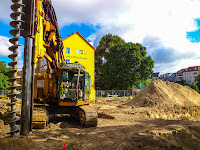 The Berlin City Palace isn’t the only one they’re building. In the north of the city, in Pankow, on Brehmestraße, they’ll soon start construction on the “Brehme-Palace,” a magnificent beacon of all that is going wrong with this city.
While the Berlin City Palace is ultimately a well-meant if foolish waste of money better spent elsewhere, the “Brehme-Palace” is purely designed to make as much cash as possible for greedy developers facilitated by politicians. 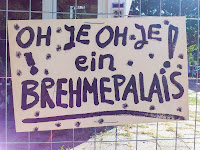 The provocatively named “Brehme-Palace” – a block of 34 luxury apartments – will be constructed in all its magnificence beside the “Ökoprojekt” of 72 apartments built over Kleingärten they already dug up despite much public protest.

I would have thought garden apartments were better than concrete for the environment, but no, the head honchos in all their wisdom know better. No doubt “Ökoprojekts” will soon be springing up all over the city.
The locals aren’t happy with the “Brehme-Palace” and why would they be? There were a few signs and banners at the site displaying their dismay.
The politicians bleat on about Berlin needing more housing. Well, the fucking “Brehme-Palace” isn’t the answer, unless you’re asking how do you get rich quick. 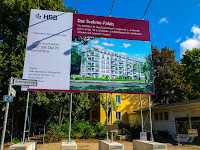 Luxury developments and “exclusive” apartments do not solve Berlin’s housing problem. They add to it. Most people who need a place to live can’t afford the prices these places are demanding. They cater only to investors and the rich.
They drive up house prices, they drive up rents. They help create a frenzy over the lack of housing and so push the prices up further again, fueling demand to unsustainable levels. Meanwhile the developers milk it while they can. And the city suffers.
It happened in Ireland before. Look how that all turned out. You can keep your fucking Brehme-Palaces.