Güterbahnhof Pankow (End of the line for the railroad yard) 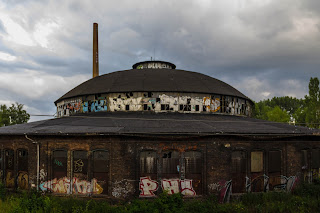 The only trains left at the Güterbahnhof Pankow are the trains of thought. Even the tracks are gone, taken away lest the carriages that once trundled through feel like trundling through again. Yes, their trundling days are over, and the surviving buildings mourn their absence even as they crumble and fade into the ignominy of abandonment. Now they’re hollow and empty inside, starved of the hustle and bustle they crave, denied their lifeblood of freight cars coming to be loaded. How they must long for their trains!
The S-Bahn still whizzes by from time to time, stopping next door with all its bells and whistles, but that only makes it worse for the once-proud Güterbahnhof, as it looks over with disdain fueled by the jealousy of not being wanted. Passengers, bah! 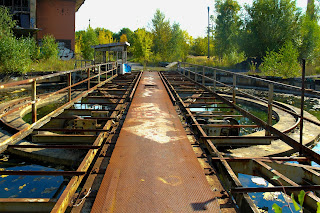 Now it just rots. Nothing works and nothing’s being repaired. The train turntable doesn’t spin anymore and the control cabin’s in a sorry state. Too many parties – even the DJ has left. 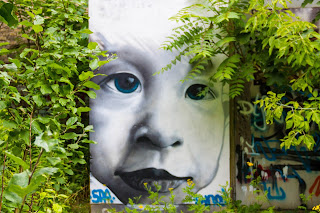 Blackened beams attest to a hellish retirement, the smell of smoke still lingers, scattered sheets of paper flutter around the office, names and addresses for all to see (so much for Germany’s paranoia with privacy law), and the clock on the administration building only tells the time twice a day. 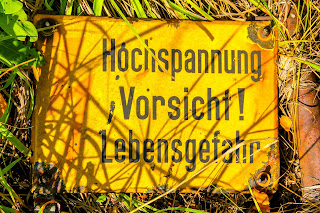 It used to be so different. The railroad yard began operations in 1893 or 1904 (depending on your source) and was only closed down (for reasons I have so far been unable to determine) in 1997. At its peak, it could handle up to 1,800 freight cars a day. One thousand 800 Güterwagen a day! 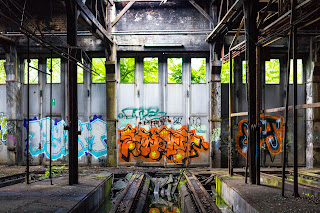 But they ripped out the rail tracks and knocked down a few buildings by 2007. Then in 2009, the whole 40 hectare site, including the land going down as far as S-Bahnhof Pankow, was snapped up by developer Kurt Krieger. He wants to invest €350 million to build a 30,000 square meter shopping center and a 40,000 square meter furniture shop (à la Ikea), while planting 1,370 new trees and creating a five hectare park. 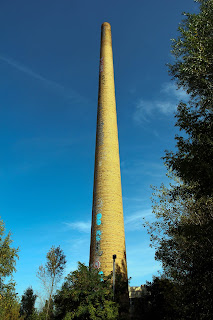 The impressive round building, where they were able to turn locomotive engines with no reverse, is a listed building, a denkmalgeschützten Rundlokschuppen, apparently dating to 1893 and one of the last two in Germany.
Krieger reportedly wants to invest €5 million to restore it for cultural use.
“Maybe we’ll turn it into the opera of Pankow,” he joked in his broad Berliner dialect, according to Tagesspiegel. Pankow and opera are a strange mix, to say the least. 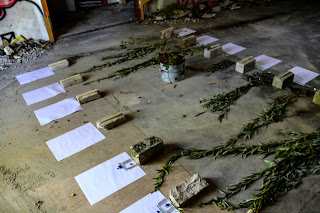 For now the site is inhabited by rabbits and talented street artists and odd people who like to practice voodoo or some such.
One of the buildings I found myself in had a load of bricks and sheets of paper arranged in the middle of the floor like a voodoo temple. Each to their own. At least it’s not as far-fetched as opera.
For now Güterbahnhof Pankow is at the end of the line. But development work could start as soon as next year. Seems it won’t be long before it goes off on a new track. 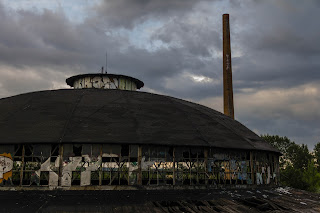 What
Güterbahnhof Pankow. Former railroad yard or freight station with two train turntables, one inside, one outside, that used to handle up to 1,800 freight cards a day. Now it handles none. But that’s progress. 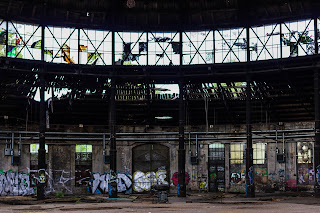 Am Feuchten Winkel 137-145, Berlin 13089.
Beside the S-Bahnhof Pankow-Heinersdorf. Literally, right beside it. Here’s a map to make it even easier for you to find. 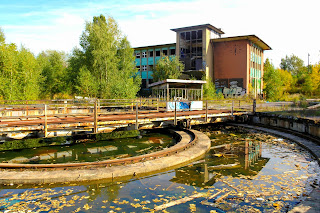 You might think it’s easiest to get there from the aforementioned S-Bahnhof but it’s not. Best to get the train there but then go back over the bridge from where you will see the Rundlokschuppen to your left, keep walking, then take your first left, go left again, and again, until you’re walking alongside the main road you just left. Keep going straight and you’ll soon find yourself in the Betriebsgelände. 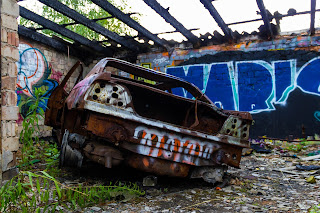 You may have to hop a gate if it’s closed, but it was open when I went last. If you follow the instructions above, you’ll be in.

When to go
I reckon daytime is best. There are no vistas for watching romantic sunsets, unfortunately. But, it could also be a decent spot for a party under moonshine.

Difficulty rating
1/10. It used to be 4/10 because it was tricky enough getting into the Rundlokschuppen. You needed to walk around, find the broken window, climb up and hoist yourself in through that, but that’s no longer the case now. See the update below. 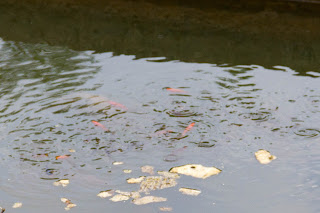 Girlfriend/boyfriend (but not both at same time) or simply friends for a party. Trainspotters are a weird species but they’d also be into this.

Dangers
There’s no security and I don’t think the Polizei give too much of a Scheiße. Just watch out for the usual things when venturing around such places. The ceiling in the Rundlokschuppen is none too safe anymore on account of the idiots setting fire to it. (Again, update below.) Don’t trip up over anything, or cut yourself on the plentiful broken glass lying around.

For more reading about this place, the Digital Cosmonaut wrote about it here. 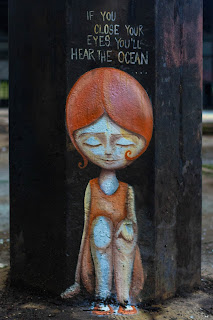 UPDATE: Monday, July 29, 2013 - Sadly the Rundlokschuppen is even more burnt now than it was before. Since my previous visit, the door into it has been forced open, and now it gapes invitingly for idiotic vandals to go in and set the thing on fire. What utter gobshites.
It’s such a shame to see an important historical building like this go up in flames. Again, it proves Denkmalschutz (for a listed building) means absolutely nothing at all. Denk mal.
Of course, for well-meaning visitors it means there’s no longer any need to crawl in through the broken window over smashed glass and shards that tear your clothes. The fun’s been taken out of it. Now you can simply stroll in, as I did today with my bike in one hand and my camera in the other, and snap away to your heart’s content. 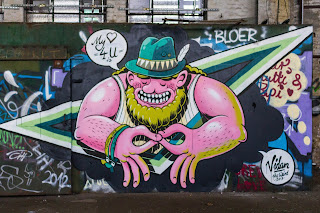 I went back to take more photos because I wasn’t happy with the previous ones. (Now you know why some are brighter/sunnier than others.)
I also wanted to see if there were really goldfish under the train turntable as a commenter mentioned. There are! There seemed to be quite a few of them having a bit of a feeding frenzy at the surface.
Otherwise I didn’t see another soul, though the familiar Berlin whiff of marijuana as I walked by one of the buildings indicated at least one soul wasn’t far away.
I’ve downgraded the difficulty rating from 4/10 to 1/10 – as another commenter kindly suggested – to indicate the ease of exploring this site. It really is no bother at all. Just be careful, you know, like you generally have to be in these places. 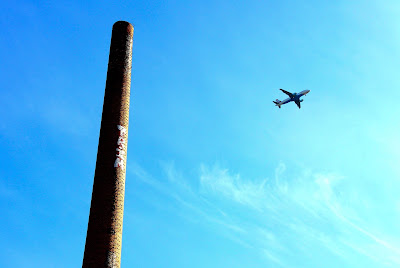