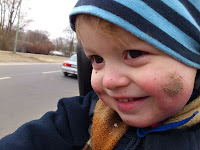 It’s been ages since I wrote about the little fella so this is for family and friends, scattered and dispersed across far and wide, but united in the esteem he holds for you all, despite your eccentricities.
He’s cool, there’s no other way of putting it – damned cool. Of course, he may drive you mad at times, refusing to cooperate on matters of domestic importance, but he’s generally reasonable and he falls in with requests once he sees they’re grounded on solid foundations.

It doesn’t always work, however, even when they are. Sometimes jumping into puddles is just too much fun, regardless of whether you’ve wellies or not, while the merits of brushing teeth are never going to be apparent to a two-year-old.
He’s nearly 2½! He’ll be in Ireland for his half-birthday in a couple of weeks. We’ll be sure to celebrate with a session down the pub. He’ll drink so much milk it’ll be coming out of his ears and he won’t remember a thing the next day. That’s how we celebrate things in Ireland. None of this Kaffee und Kuchen business.

But he has a German sweet tooth and he likes his Kuchen. He’s been corrupted already. We’d been trying to keep him off sugar and shite, but it seems it’s unavoidable. They feed him in the Kita and anytime someone farts around here it’s a special occasion that must be celebrated with Kaffee, Kuchen, sweets and sugar-laced food.
He can never get enough milk though. He’s on the cows’ milk at this stage. They’re still among his favorite animals and who could blame him? Wonderful creatures. I reckon they’re one of the reasons he’s so keen to go back to Ireland – them and all the puddles he’ll be able to bash sticks into.

I only booked the flights because he was talking about it so much, of going on a plane, the cows, my parents, Helen and Noddy. He still remembers their time throwing stones in the well and he’s looking forward to a repeat of the good old days, even if he won’t remember the good old days when he’s experiencing new good old days. These are all good old days.
He expects Noddy will be there, though I’ve told him he’s far away, in Australia.
“Kangaroo!” he says. He’s right, too. Australia is full of kangaroos.

We went to the aquarium on Friday to look at the fishes. Of course he plunged his hands straight into the goldfish. I’m not sure what he would have done if he’d caught one.
He got hungry, so I asked if he wanted a hot dog. He nodded.
“Warm,” he said after biting into it.
“You’re right! It is warm. Not hot at all, is it? And it’s not a dog, either, is it?”
“No.”
Yeah, he’s no fool. On the way back he pointed out my office building from the train. I couldn’t believe it. I think I pointed it out once before, yonks ago, and the S-Bahn doesn’t exactly hang around when it whizzes by. 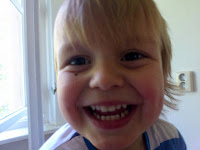 Every day he does something that’s impressive. His progress is impressive, of course. On our way to the aquarium we could see the S-Bahn at Alexanderplatz S-Bahnhof.
“Es wartet auf uns,” he said, paused a second, then, “The train’s waiting for us.”
Of course the train fucked off, but we got the next one.

His German is dominant but he’s surrounded by it all the time and I suppose it’s understandable, perhaps even forgivable. But he can’t curse as well in German.
“Shit,” he says if he drops something. He’s on the verge of saying “shite” and “Jaysus.” For now he only says “Jayz,” which works fine too. No rush, all in it’s own good time. Sometimes, at inopportune moments, he’ll say “fuck,” but only at inopportune moments. Hopefully he says it in the Kita, shakes things up a bit.

He saw rugby since I last wrote, and a huge smile broke out across his face (picture to the left), but I think he prefers playing to watching, whether it’s rugby in the apartment to the neighbour’s consternation, or football in the kitchen to Jenny’s.
Other hobbies include running around laughing hysterically, kicking, jumping into, onto and off of things, screaming, breaking things, splashing, watering plants and general gardening, puzzles, cars, reading, singing, eating, drinking and pooing. He still isn’t pooing in a toilet and doesn’t seem to be in any hurry about it either. Sure you may as well make the most of having your arse wiped while you can.

But he pissed in a potty today! Standing up, like a man, none of this sitting down business. He was so proud, us too. We gave him a big round of applause, lots of whooping and cheering. He smiled from ear to ear, raised his arms into the air. Woooooo! I imagine he’ll be peeing au potty more often from now on, especially if he always gets such a reaction.

He’s happy to see the Fernsehturm whenever it appears, and is asking for its whereabouts when it doesn’t. Otherwise he’s a water-rat and a spud-eater. He went off with Jenny for a few days’ break last week, spent the time running around naked DDR-style and dipping his legs in a lake. Back home, he eats spuds like they’re sweets, one after the other, skin and all. He’d eat them raw if allowed.

Lately he’s been calling me “Papa.” Papa! He must have picked it up in the Kita. I guess I should be grateful he’s so possessive in front of the other kids.
“Meine Papa,” he says, clinging to my leg.
I bite my tongue and am thankful he thinks I’m a better dad than the other kids’. Terrible, really, when you need that reassurance.
He’s a little man already, a person, a character, a chancer and a messer. He jokes around, messes with your head. He’s good at telling when you’re messing with him, too. I do it all the time. You’d think the poor fella’s head’d be wrecked but he seems to enjoy it all the more.

It’ll be strange when I move into a new place next month. Strange for him and for me, strange for Jenny on the nights he isn’t there. But I’ve no doubt he’ll make the most of it and that his happy demeanor will win the day.
He’s cool, as I said before. Damned cool. He always makes the best of things, and he brings out the best in things, too. 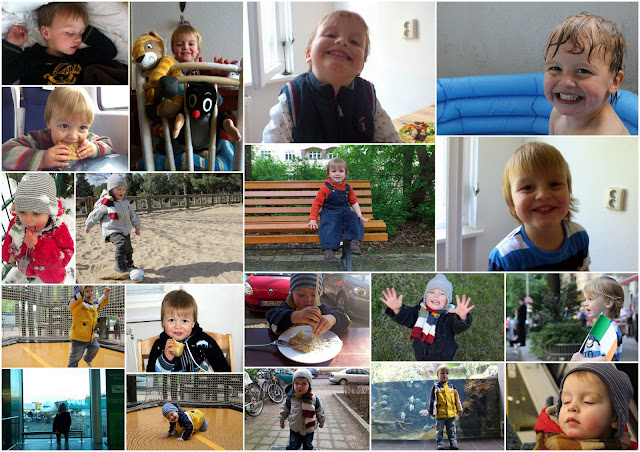