Bolting over to Norway 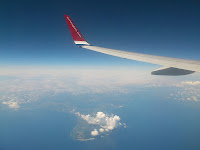 I’m certainly faster now. I’m en route as I type, above the clouds, above the sea, thanks to Norwegian’s free onboard wifi. Mad huh? There’s an island down below me, looks mighty purty. Sure, what the hell, let me take a picture. Now, you can see it too!
I’m looking forward to this trip. I’ve been invited to a “Strawberry Party” at the Russian embassy later on. My boss told me there’d be Russian supermodels serving caviar and champagne.
I have to work too, unfortunately. Bolt is giving his press conference at the same time. Hopefully there’ll be some of that champagne remaining by the time I finish up. With a bit of luck his presser will be as quick as his races are, though he won’t be able to say much in under 10 seconds.
Norway’s damn expensive, judging by the prices on the plane; €5.50 for a beer, €3.50 for a coffee or a water. They don’t use €uros, but NOKs and everything costs thousands of NOKs.
I’ll either be NOKing back the free champagne or looking up long-lost Viking relatives to see if they’ll cook me a meal. It should be good.