Well, I survived London, but only just. I was coming to the conclusion it wasn’t as bad as I’d thought it was, but again it ended badly and again I vowed never to go back. London doesn’t like me and I don’t like London. We’ll go our separate ways, again.

The people I met were friendly, but I avoided the pubs, the cuisine, and anything London except the London Underground. I saw a lot of that as I made my way to and from Wembley, except when I finished work on the Saturday night and the damn thing wasn’t running.
Capital city of England, Britain, the British empire and the trains don’t go through the night on a Saturday night! The whole metro stop was locked up and barricaded as if someone would steal it.

I had to get a taxi back to Earl’s Court. The first crowd I rang told me there were none available and hung up. I found another thanks to my disconcertingly smart phone and a dude from Somalia turned up. I know he was from Somalia because I asked him what language he was speaking after he finished his argument over the phone with some other dude, who I guess was Somali too.
“Somalia eh? Haven’t been there yet. How are things there now?”
“War.”
Right. We talked about other things. He seemed to think Britain was doing good things for his country. Meanwhile, to survive and pay an insurance premium of £3,000 a month, he was working 19 hours a day. You can learn a lot about a country from its taxi drivers.

It was then I discovered the roads were closed, some of them at least. Imagine, closing roads! But closing time is England’s favorite time apparently.
It’s the reason I avoided the pubs. But even in Wembley, when I finished work, they were trying to turf working journalists out as if they were in a pub. I finished my last report sitting on the pavement beside the stadium with my back to a pillar.
The work itself was great, the match was fantastic, apart from the result.
“The result is so shit that I cannot....” Jürgen Klopp trailed off. “All the other things were, great.”

It was a privilege to be there, to share in the excitement, to be part of the whole thing. I got my reports written – one twice after Word crashed – and rubbed shoulders with the players in the mixed zone. It’s there you learn they’re human too.
Arjen Robben was happy, obviously. Schweini and Thomas Müller sauntered by and Dante had some sort of ghettoblaster thing to his ear, blasting out some Brazilian stuff as he sang along and danced past the journalists without stopping for one interview.

The Dortmund fellas were pretty down as you’d imagine.
I was so tired by the time I finished after the final I didn’t even have a beer, just collapsed into the bed once the Somali fella had negotiated the closed roads to bring me home – to Hotel Oliver on Cromwell Road.
Not even Cromwell could stop me sleeping. But he was to have the last laugh, the fucker.

I had two hours to spare by the time I finished up on Sunday, two hours to see the city. I made the mistake of heading for Westminster, where all the tourists go. The place was swarming with them, you could barely move. I wandered down along by the river, past the big wheel, toward the bridge with the towers. Well, by the time I got there I’d seen enough, hopped on a train for the airport.
They like their steel and glass and soulless shiny buildings in London. Camden, which I’d seen briefly on the Thursday, looked much more interesting than the center, more Berlinery, if hammed up Berlinery. It’s run down but sanitized, not real. Regardless, I couldn’t enjoy that for long either.

Nobody drinks on the trains – it’s probably not allowed. I get the impression everything is shackled. There are signs everywhere telling you what you can and can’t do. Everything is designed to avoid being stolen. Evidently the natives are all either thieves or terrified of thieves. Paranoia roams the streets.
Berlin thinks it’s multikulti, but it’s not compared to London, where you have people of all varieties from corners of the world never heard of in the German capital.

The only other discernable difference is that London is round shapes where Berlin is 90-degree angles. The London Underground sign is a prime example. Soft circles are preferred to jagged angles. Germans never cut corners so it’s only jagged angles here.
Jagged angles or not, I was happy to get back. Not before Cromwell put a curse on my escape. He delayed my plane and cancelled two buses to ensure I only got home at 4.30am. He also ruined my photos. My camera was on some weird setting so only a few survived.
But I survived. Ultimately, that’s all that mattered. 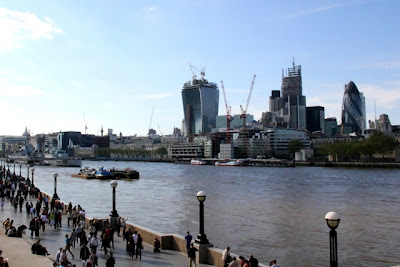 London’s not all bad of course. Almost 50 years ago, the city gave the world The Kinks, and for that I will always be grateful.
Labels: London travel