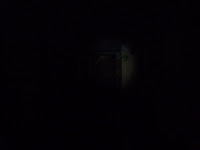 In the silence you don’t know, you must go on. I cower in the pitch darkness ten meters below, unable to move, frozen still. Deafening silence, broken only by a solitary drip. DRIP! Then silence again. I can hear my heart beating. Heart pounds again before the next inevitable drip, steady as the last. DRIP! I flash a torch at the wall beside me. It glistens black. Wet. The drop falls again. DRIP! The only sound but for the thumping of my heart. I can’t go on, I’ll go on. I’ve made it this far. 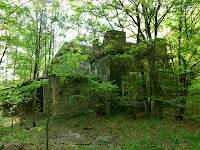 Subterranean treasures are rarely easy to find. Submarine even less so. Armed with sketchy directions, hope and a rough sea idea, I set off, leave the road and cut through the forest. Trees, trees and more trees, more trees again, and more, more again, then there it is. Boom! A shock when it finally appears. Looming in murky light. Surrounded by a rusty barbed wire fence. The dilapidated shack I was looking for. 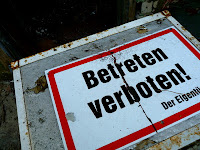 A “Betreten Verboten” sign confirms it. Flies swarm to greet me as soon as I defy it. One lands on my neck. Bites. A dog barks, somewhere. Christ, I hope it isn’t on the site. It sounds further away. Too late to turn back now anyway. Come on man, get a hold of yourself, get a grip! 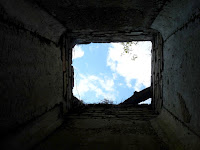 I pull myself together, spot the hatch I’m looking for. A bee hums, something else rustles in the grass. I lift up the lid. A swarm of flies buzz up in my face. AAAAGH!! A gunshot. BANG! Another bark, closer. More gunshots, louder.
The hole is eight metres straight down. No steps, ladder, nichts, not what I was expecting, but fuck it I have to go now. I jam my legs on one side, my back on the other, and jimmy down like a peanut. No idea how to get back. Jacket ruined. I pull the flashlight out and proceed. I’m in the bunker! 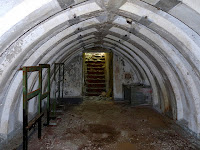 Soon, however, I discover it’s not the right bunker. It was smaller and had less rooms than expected. Not what I was looking for. It leads me straight back to the dilapidated shack. I get out and start again, back through the trees. 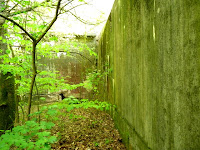 More abandoned buildings present themselves, each with stories to tell no doubt, but I was looking for something specific.
I cycle on. Then I meet two oul’ lads ambling along through the forest. Vladimir and Estragon.
“Excuse me, do you know where the old bunker is?” 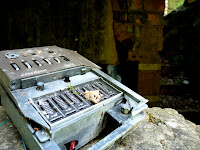 The smaller, younger one replies.
“Ah yes, that’s where the Russians used to store their rockets. They had them aimed at Berlin. Very bad. But there’s nothing there to see now. The bunker’s destroyed. I’m 71, you know!”
I didn’t, but thank him profusely all the same.
I wander on, eventually find gates. The gates I was looking for! I hurry in. More buildings, more, more, more, but where’s the fucking bunker? I’d about given up, had enough, when finally, I lift the manhole and see the ladder down, down, down… 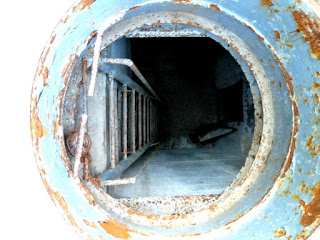 This is it! I take a last look at the sky and plunge in. I’m here! I’m finally fucking here! I scurry down, heart in mouth, wary of previous tenants still hanging around. It’s dark. Darker than Thatcher’s soul. I can’t see a thing. I’m 10 meters underground, in the very bunker that controlled Germany’s feted U-boat fleet during World War II. Central command for submarines marauding the seven seas. It was here those poor fuckers on Das Boot would have been ordered to go past Gibraltar! Wow, just wow. 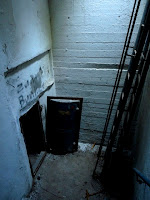 They began building here in 1939, for what was originally supposed to be a naval intelligence school. When all the falling bombs made Berlin somewhat uncomfortable, some bright spark decided the German Naval High Command should move here, to this heavily forested area in the middle of nowhere, via Eberswalde, where it moved first after leaving Tiergarten in Berlin. 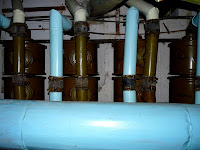 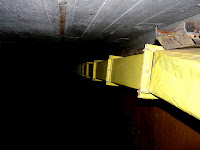 Koralle’s end came in April 1945, however, with an air raid doing its bit on the 17th, and the Russians taking over on the 21st. Dönitz had already ordered the BdU to “Objekt Forelle” in Plön, near Denmark, before going on to Flensburg-Mürwik, even closer to Denmark, eight days later. 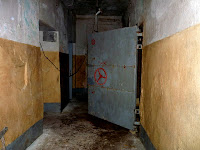 When all was already lost, Dönitz succeeded Hitler according to the mad fella’s last will and testament, though there was little to do at that stage but surrender and hope for the best. Dönitz led the short-lived Flensberg Government before undergoing trial in Nuremberg. 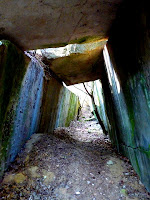 On his release from prison he gained further fame for creating the snack that bears his name, the Döner Kebab. It remains popular to this day.
The Russians took over Koralle of course, blowing up the flak bunker and the other overground bunker. Perhaps in gratitude for the lovely kebabs he made, they spared Dönitz’ house and the underground bunker, where the navy headquarters had been based over four levels. It had a barracks, officers’ casino, loads of telecommunications equipment and other army-type stuff. 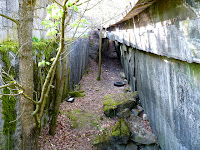 Maybe that’s why the Russians kept it. They used the site as a munitions depot, storing the missiles previously mentioned by Estragon, or Vladimir.
As I said, it was dark down there, 10 meters underfoot. I actually felt I was in a submarine, not just a subterrain. The silence was deafening, excruciating. Nothing but the drip. Drip! Drip! Then thump, thump, the thump of my heartbeat. The loudest silence there ever was. 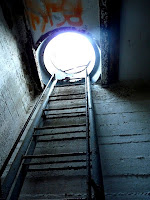 There’s not much to see, not even graffiti. Wet crumbling rooms, corridors, pipes, tubes and cans of fuck knows what. Crazy cans, silver, big, sitting there with tubes coming out.
The Russians must have stripped the place of all its U-Boot paraphernalia. Those Russians are parasites of the military world and will strip any military stuff they reckon is better than their own. Any military stuff then. 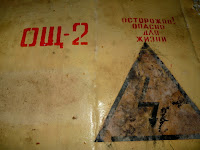 When there’s nothing to hear, you listen. I thought I heard a voice, a girl’s voice, a laugh. I stopped, listened again, but there was only the incessant dripping and thumping. It occurred to me someone outside could come along and close the hatch, sealing me in there forever, leaving me to lick walls for sustenance and grow big bulbous eyes to cope with the dark. Trapped forever with the ghosts of tortured submarine men.
I could imagine the clang of the hatch slamming shut. It wasn’t fun anymore, I needed to get out. I flashed the light along the dark empty walls, retraced my steps through holes, long forgotten corridors, empty doorways. It was endless, I hoped to fuck I didn’t take a wrong turn. The hatch was unrecognizable – it was almost twilight outside – but I finally found the damn ladder and emerged. I was never so happy to see the sky. Even heroes of the deep were happy to see the surface. 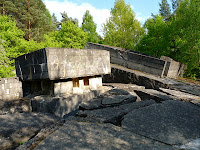 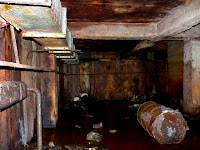 Where
Two-thirds of the way to Lanke from Bernau, in off the road to the right. The site is in a northwesterly direction from the village of Lobetal. Here’s a map showing where what's left of the destroyed (overground) flak bunker is. The rest is nearby.

How to get there
See above. I got the train to Bernau and cycled from there. Even armed with directions, it took me a long time to find, however. The area is still heavily forested. It’s not signposted and the tracks go off in all directions. 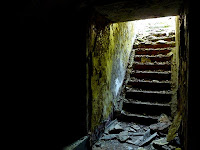 Getting in
Find the hatch, go down the ladder. You’re in. 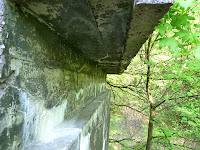 Daytime, definitely daytime. A fall here is very bad news, and I seriously do not recommend taking any chances in the dark. Obviously, when you’re down there it’ll be dark anyway, but you’ll want some daylight at least so you might see where you have to get out. Do not cut it fine, like I did, and leave it till twilight.

Difficulty rating
8/10. Finding this is the main problem. If I were going again, I’d probably bring a tent and overnight in the woods. It’s also very dangerous. Apparently there are munitions still on the site, so you might get a leg blown off if you’re unlucky. 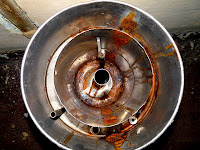 Who to bring
Bring someone, for safety’s sake. Mobile phones don’t work here, neither in the bunker nor above it.

What to bring
A torch. Do not forget a torch. Make sure it’s a good one. In fact, bring two. A compass would be useful in case you get lost. Bring a camera of course, some beer for the road, perhaps a bottle of water too. And some grub. Prepare to be out for a whole day at least.

Dangers
Like I mentioned already, unexploded bombs, hidden pitfalls, rusty ladders, loose bricks, low ceilings. I’m guessing the underground bunker itself is sound enough but you never know. A helmet is not going to save you if it does collapse. At least there’s no security, unless you count the ghosts of tortured submarine men...

Disclaimer: Karl Dönitz didn’t really create the Döner Kebab. On his release from prison he wrote a couple of books, autographed postcards and answered correspondence until he died on Christmas Eve, 1980. 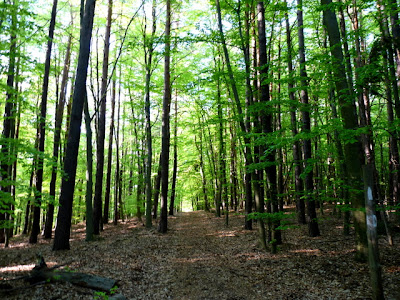