A brush with the Ordnung

Nothing’s more German than the fucking Ordnungsamt. Literally, it’s an Amt for Ordnung, the Department for Order, there to keep order at all times.
Order is very important to Germans. They’d be lost without it, headless chickens in a perpetual state of panic and confusion. “Ordnung muss sein,” they say. There has to be order.
It’s also why they follow orders blindly without ever questioning who’s giving them. It’s their perfect excuse. “I’m just following orders.”
Ordnungsamt officials, by definition, are petty-minded fuckers there to make sure everything is in order. They go around checking the grass, making sure it’s within the permitted height restrictions, they make sure dog shit is lined up in neat little rows on the pavements, they put parking tickets on carelessly parked cars, they round up stray cats and have them shot. They keep order.

I saw your wan looking at me with her beady eyes as I sped past. I was bringing the young lad to the Kita, cycling on the pavement. I cycle on the pavement because the cobbled road is fucked and always full of heavy construction machinery for the apartments they’re building where they ripped out the Kleingärten allotments. Of course, that’s all in order.

She was giving some guy a ticket for not wearing the right shoes or something so I just cycled past. On the way back, after I’d disposed of the young fella, she was giving some other cyclists grief. They were all blocking the path as I approached so I had to kinda swerve to avoid them.
Your wan, the power-hungry oul’ bat, started addressing me, saying I didn’t have a kid on the back of the bike anymore. Well, I didn’t slow down. I had two features to write and hadn’t time for her crap. So I kept going.
“Absteigen! Absteigen!” she barked.
Fuck that. I pedaled on. I’d also seen that her Ordnungsamt vehicle was hemmed in by two huge trucks and a digger all stuck where they were because they were too big to maneuver past each other. Her Ordnungsamt buddies further up the road were stranded too. 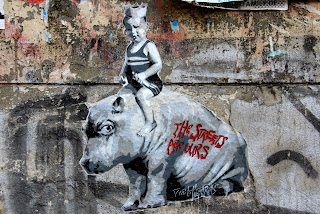 But I’m sure she called Code Red and alarm bells and sirens were blaring in Ordnungsämter all over Berlin. Merkel was probably informed there was a blatant infringement of Ordnung before swooning on the spot.
I made it to the office, got my features written, but now I’ve to go into hiding or change my identity. Your wan will be looking out for me now. I’ll have to grow a beard, get a fake nose and sunshades. I’m a fugitive on the run from the long arm of the Ordnung. At times like this I wish I’d moved to Spain.