The apartment search isn’t going too well. Shite is the operative word. It’s going shite.
But I guess I should be grateful it’s going at all and that I have the luxury of looking. Rosemarie Fliess, a 67-year-old woman with severe disabilities, was evicted from her flat in Reinickendorf last week with the help of 150 Polizei. Homeless, she died two days later.
Rents are rising in Berlin and landlords are rubbing their greasy paws together and salivating at thoughts of all the riches that awaits them. They’re supported by the courts and enforcers.
Apparently, Rosemarie’s landlord said about her before her eviction, “such people should live in the jungle or kill themselves.”
I’m in a privileged position to be looking for a place without the specter of poverty over my head and without the pressure of finding a place urgently.

In fact, I’ve taken my time to date, two months or thereabouts so far, but I’m increasingly coming to the conclusion that I’m going to have to settle for a less than satisfactory hovel if I want a place to call my own – even if it’s only in name.
Perhaps my demands are too high. It has to be cheap, central, yet close to where we are now, with two rooms, a balcony and – above all – it has to have a view of the Fernsehturm. I think I’m love with that thing. It’s an obsession.
Lately, because I’d come across precisely zero places meeting all those criteria, I’ve been relaxing them somewhat, and going to see other places too – anywhere within my modestly increased budget.
It’s not scientific, and I’m too tired to check, but I reckon the rate of evictions in Berlin has increased in proportion to the length of queues for viewing apartments in certain areas.
At a Besichtigung last week, the day after Rosemarie died, I counted about 70 people to see an apartment near Helmholtzplatz in Prenzlauer Berg. All at the same time. It was ridiculous. Everyone filed up the stairs, one after the other. It was so bad no one even complained about the lack of the advertised balcony. Some were going around measuring the place, imagining their furniture in it.
I didn’t even look, just filled in the form, added my wheelbarrow-load of all the other forms you need – Schufa, Personalausweiskopie, Verdienstbescheinigungen, Mietschuldenfreiheit etc. – and gave it to the overwhelmed estate agent. I haven’t heard back from her since. I don’t expect to.

That’s the thing. These people advertise their places for rent. You’re lucky if they bother replying to your enquiry. I don’t know how many emails I sent without response.
I applied for another place nearby too – there were only 40 people for that Besichtigung – and I haven’t heard back from them either. I don’t want it so I didn’t chase it up.
The one place I did want I didn’t get. It was almost perfect, within budget, near Mauerpark, with a balcony from which you could see the very tip of the Fernsehturm, only about 3cm, but enough to know it was there.
Someone richer, with a better looking passport photo, a nicer name or more agreeable nationality – who probably doesn’t even give a shit about the Fernsehturm – got it instead. At least the estate agent was decent enough to tell me. 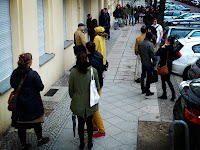 Yesterday I went to see four places. One was nice – you could see the TV tower from the entrance – two were shit, and the last one wanted a commission of at least €1,118.60 just for the privilege of them renting it to you. (Maklergebühr of 2.38 times Kaltmiete.) It may be more, depending on whether they decide to up the existing rent, which of course they will.
Some idiot will pay it, and as long as there are enough idiots, people like Rosemarie will be evicted. There’s another eviction scheduled for tomorrow, when property managers GESOBAG flex their muscles to kick out another 67-year-old after 30 years in the same place because of three months’ rent arrears.*
As if the law-backed property sharks weren’t bad enough, you also have to look out for the fraudsters, who seem to be placing adverts on the likes of Immobilienscout.de with impunity. They seem to target foreigners, with fully furnished apartments for prices too good to be true in the most sought-after areas.
Anyway, the search continues, as does the guilt as I realize I’m contributing to the problem. If there weren’t so many people queuing at Besichtigungs to pay rent, those who can’t wouldn’t be forced out onto the street. 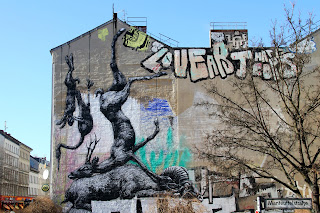 Besichtigungs ensue when the landlords or property managers actually have to work. Normally they get the previous tenant to find the next tenant for them. So you need to lick the previous tenant’s arse before you get to lick the landlord’s. I suspect the only real licking that works is bribery, but then that’s just giving the fuckers what they want.
So I may yet end up living in a tent. At least summer’s coming and I can find always find a spot with a good view of the Fernsehturm.