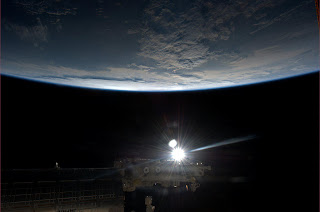 If the Great Wall of China is the only man-made structure visible from space* then the Berlin Wall is the only thing that can be seen from space even after it’s gone.
Chris Hadfield, a Canadian astronaut currently floating above the planet in a tin box known as the International Space Station, has been sending back indescribably beautiful images of this giant rock we call home through Twitter.
He seems like a genuinely likeable fellow and has forever endeared himself to Irish fans by tweeting pictures of Ireland and then sending greetings in Irish for St. Patrick’s Day from space. 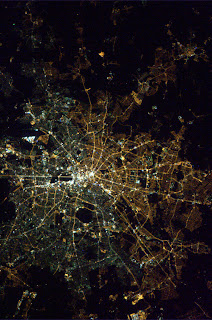 Last night Commander Hadfield, who is leading Expedition 35, tweeted a photo of Berlin from above that revealed the startling discovery that East and West Berlin are still clearly defined according to the city’s division following World War II.
More than 23 years after the fall of the Berlin Wall, light bulbs still clearly differentiate between East and West!
I couldn’t believe it when I saw it first, but even a cursory glance at the image to the left reveals the orangey glow of street lights in the former Soviet sector, compared to a whiter glow from the sectors administered by the American, British and French occupying forces. 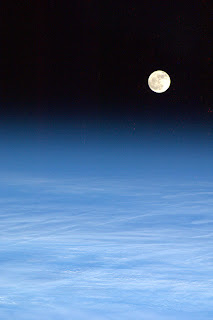 Subsequent speculation suggested that the difference may be due to gas lamps vs. electric lights. I’m not so sure that there are that many gas lamps still burning. And are they all only in the West?
Apparently there were large stocks of lamps and bulbs still available after the Berlin Wall came down in 1989, and so they have been used to replace and maintain the existing street lights as before.
If the gas lights are to blame for the visible differentiation from space, then perhaps the division’s days are numbered. The city wants to save money by replacing them with electric lights.
Whatever happens, any visiting aliens looking down in the meantime will presume East and West Berlin are still separate entities. It’s gas! And we know this thanks to Cmdr Hadfield’s remarkable messages from space. Thank you, Commander. 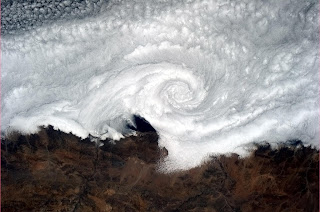 *Apparently this is a myth. Bono’s ego, while not a structure per se, is the only thing man-made thing on this planet that can be identified with the naked eye from space.

None of these pictures are mine. I presume they’re all taken by Cmdr Hadfield because he tweeted them, and hope, therefore, that he won’t mind me reproducing them here.
Labels: Berlin Berlin Wall mad shit space