Munich doesn’t have any Spätis. Well, maybe one, but if anything that solitary beacon of hope just shows how hopeless it is.
I got back to the center after work around 1.30 a.m. with my tongue hanging out for a beer. Bavarian beer is the best in the world, presumably the only reason anyone would consider living in Munich.
There was nothing open on my way to the station, nothing open at either station, and nothing open from the other station. Not even a vending machine anywhere!
I was getting desperate. I stopped a local, asked him where I could find a Späti.
He looked at me like I was demented. In a way I was.

Disconsolate, I turned away, headed back toward the hotel.
Just a few doors up from it, I noticed a “New York Bar” with people outside. I’d have tried anything at this stage, so I went in.
I asked your man behind the bar for a Hefeweißen. They had none. Only Pilsener or Guinness. What kind of place was this? A bar in Munich that didn’t even have Helles?
“Go on, gimme a Guinness then,” I said. “They’re pints are they?”
He replied in the affirmative.

I went to sit at a table. He told me not to. It was reserved. At half fucking one in the morning. He pointed me to a shitty little table in the middle of the way. I said damn it, I’ll sit at the bar and wait for me Guinness there.
Well, he plonked it on the bar. A thimble. I looked at him. That isn’t a pint, I told him. A pint is 568ml.
I asked him how much it was. 0.4l he replied. No, how much does it cost? €5.50. Five fucking fifty for two-thirds of a pint!
“Keep it,” I told him, and walked out in disgust. 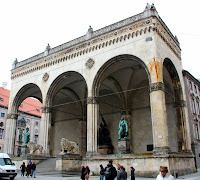 There weren’t even any vending machines with beer in the hotel (as there were in Köln, for example) so I traipsed back to my room and gave up, defeated. There was a bottle of water. I drank that. Water! Here I was in a city stuffed to the gills with the world’s best beer and here I was drinking water.
I decided I hated Munich and nothing will change my mind.
I saw nothing to change it the next day, despite a most enjoyable lunch with the Honourable Husband. I didn’t want a beer at that stage but I ordered one anyway, still reeling from my experience the night before.
His Honour told me how bourgeois Munich is. Too bourgeois for Spätis, apparently. I got the hell out of the place as quickly as I could.

First thing I did on my return to Berlin was pop into my local Späti for three bottles of Andechs, a Bavarian brew (not from Munich but Andechs, funnily enough), that I currently consider to be the world’s finest.
My heart jumped for joy on hearing the tingle of the bell as I opened the door, I almost cried at the warm welcome I received, and I nearly kissed the floor in gratitude when he handed me back my change. That, dear Münchkins, is a Späti.

Thanks to Harvey Morrell for attempting to assist me in my hour of need. It was he who pointed out that Munich may actually have a Späti after all. Unfortunately, by then it was already too spät.
Labels: Bad service beer Münchkins Munich