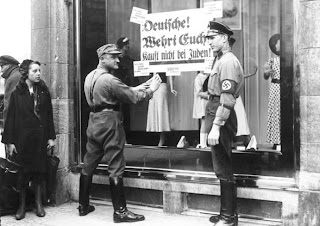 Eighty years ago today the Nazis enacted the boycott of Jews, calling on fellow Germans to defend themselves by not buying from Jews or in any way doing business with them.
“Germans! Defend yourselves! Don’t buy from Jews. The Jews bring us misfortune! Avoid Jewish doctors! Don’t go to Jewish solicitors!”
SA “brownshirts” – Nazi thugs – plastered these antisemitic signs on Jewish shops and businesses, doctors’ practices and lawyers’ offices, and then physically prevented people from entering.
Not that they really had to. Nobody really tried to stop the fuckers. They were allowed do their best. Some even encouraged them.
“We huddled forward through the crowd,” remembered Gerhard Durlacher. “Some frowned at us, others looked calmly, or distraught. But there were also some who were grinning, ready to enjoy the show.”
Only a small minority showed enough courage to defy the boycott.
Some Jewish doctors were rounded up from hospitals and taken off to concentration camps.
Apparently the churches did nothing either. Catholics, Protestants, Methodists – all their noble leaders, the good and mighty of the time, did absolutely nothing. The self-serving fuckbags didn’t even speak up against it.
For me the lack of action against it is just as shameful as the shameful action itself. We’re not talking about illiterate imbeciles here. If people didn’t know what was going on they should have made it their business to find out. Instead they closed their eyes, put their fingers in their ears and comforted themselves with their own ignorance.
Of course, we all know what happened next.