Sheer wild unadulterated pandemonium. I’d never experienced anything like it, probably never will again.
My initial match report was done. It was 2-1 to Malaga and we were into injury time. Dortmund needed two goals to avoid crashing out of the Champions League. Mission impossible. Malaga were defending like dogs and the wonderfully named Willy was outstanding in the visitors’ goal.
One minute into injury time Marco Reus scored. The place erupted. But surely it was just a consolation. 2-2 and Dortmund were still going out on the away goals rule.
Cursing, I started rewriting my match report as the stadium announcer was calling on the side to keep attacking.
A goalmouth scramble, screams, shouts, roars, and Felipe Santana knocked the ball over the line with bodies strewn around.

WAAAAAAAAAAAAAAAAAAAA!!!!!!!!! 3-2 to Dortmund! The place went fucking apeshit, APESHIT. Jesus Christ, it was incredible. The whole press section was jumping up and down, journalists below me were punching the air in delight, someone to the left of me was shrieking like she was being murdered, beer and flags were flung into the air, and 68,000 people all screamed, bawled, howled, raved and roared in utter frenzy. Mayhem.
I had my head in my hands, I couldn’t believe it, I just couldn’t fucking believe it. All around me, people were losing theirs. Nobody was sane.
But I had a match report to write, quick! No time for panic.
There was beer on my laptop from the commotion, so I had to wipe that down with my gloves, the mousepad wouldn’t work, but fuck it, I had a report to write. 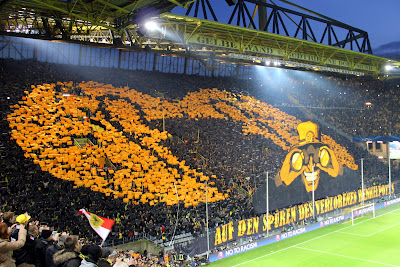 Somehow I got it done, and sent, so I grabbed the laptop and tried forcing my way through the crowd to get down for the press conference. Nightmare. I won’t bore you with the details, I made it anyway.
Jürgen Klopp, the brilliantly named Dortmund coach, was pleased; his counterpart Manuel Pellegrini less so.
“I’ll never forget this game,” Klopp said.
Neither will I.
It’s unvergesslich.