We won! For now at least

There’ll be no more destruction of the East Side Gallery today, at least according to police.
The Polizeisprecher made his announcement around midday, having earlier threatened protestors with arrests and fines if they didn’t back away from the scene.
“I’d hate for anyone to get injured,” he said in a kind voice over the loudspeaker, threat clearly implied.

Nobody moved away. Everyone held their ground. Around 300 protesters had gathered to stop a scandal from being perpetrated before our eyes.
The destruction workers, the fuckers, had started already under police protection at 7 a.m. and removed a section, leaving a conspicuous 1½-meter gap in the longest surviving stretch of the Berlin Wall.

The hole was there already when I arrived, by which time the protesters had just forced their way past the police tape and stopped any further destruction. Police used sturdier barricades to prevent them getting any closer.

Some protestors brought along a new section of Wall to cover up the gap. “Mr Obama, tear down Wall Street,” was written on it. There was a bit of argy-bargy when it was forced through the police lines, but in the end they took it and place it beside the gap. Later they confiscated it. Evidence I suppose.

Other protestors held up signs. “Does culture no longer have any value?” asked one in Berlinerisch with “Die Yuppie Scum” in smaller letters. Others included “Mediaspree? Piss off!” and “Berlin Sell-Out” as well as “Berlin, selling itself and its history.”
More and more police arrived, and truckloads of barricades. It was fairly obvious they were going to force the protestors back and allow the destruction continue.

“Shame on you!” shouted one woman.
Further up the Wall there were more police at the entrance to the construction/destruction site, protecting the criminals. One let me in to take pictures after I showed him my press pass – one of the cops that is, not one of the criminals. The destruction workers were a rough-looking bunch but they’re not the real culprits.

By 11 a.m. the police evidently decided enough was enough, and they began doing maneuvers to dissipate the crowd, similar to the ones they do at the May Day riots every year. They also had cameras to record the crowd, like they do at the riots.
The Polizeisprecher made his announcements and threats but nobody budged. I was beside the Wall near the crime scene when they started violently pushing people back. There were shouts, complaints, a bike was knocked over. I didn’t see any fists flying.

Two of them shoved me back. I said I had a right to stand there. “No you don’t.”
I said I was press. “Doesn’t matter.”
At least she used the formal “Sie” when addressing me. Others weren’t so polite. One Polizist had a face contorted with rage as he struggled with a protestor. You could see he was just itching for a scrap.

Once they set up the new barricades, the protestors settled down again. Two girls beside me were drinking bottles of Sterni. It was clear no one was going anywhere, despite the biting cold.
A politician told a TV crew he wouldn’t have allowed it happen if he could stop it, that the developers “must have a very bad conscience” for rushing through the demolition, and some other blather about the senate having to have a debate about it.

Still nobody moved. Then the Polizeisprecher said work was halted, before changing it to the more definite, “Work has stopped for today.”
Success! For now. The crane looming ominously over the wall was pulled back, the next section of Wall destined for withdrawal was released, and then – like in a Hollywood movie – a ray of sunshine burst through the dark clouds and illuminated the scene. Cue a great cheer from the crowd.

At least one woman was needlessly arrested. Not sure for what exactly, but she said she pushed back when a policeman touched her breast. She was tiny, but manhandled by two HUGE policemen with others circling around to prevent people taking pictures. She called them “Bullen” so they probably didn’t like that. I hope she’ll be OK.

Still, I couldn’t believe it. We’d actually stopped the demolition! I asked a Polizist what the story was now and he said the demolition workers wouldn’t be working over the weekend.
I hope to fuck the politicians use the breathing space to do their jobs in the meantime – saving a world-famous “protected” site of incredible historical importance from senseless destruction.
It’s a small victory. But I’m proud to have contributed, proud to be a Berliner today. 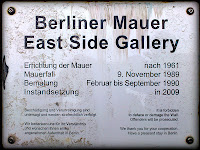 Just beside where the gap has already been cut is the plaque you can see to your left. Read the small print.
Labels: achievements bad shit Berlin Wall bureaucracy capitalism corruption East Side Gallery gentrification history Law police shady shit