Hoffnung for East Side Gallery

All it took was over 6,000 people and David Hasselhoff.
On Sunday, property developer/investor Maik Uwe Hinkel called off work at the East Side Gallery until March 18 at least, after 6,000 to 10,000 people (depending on who’s counting) turned up to voice their anger that afternoon.
On Monday morning, The Hoff chipped in: “How can you tear down the wall that signifies freedom, perseverance and the sacrifice of human life?”

Monday afternoon, Berlin Mayor Klaus Wowereit finally opened his gob on the issue and said: “I support the preservation of the Wall pieces. The senate will address the topic on Tuesday.”
Wow. I’m impressed. I really didn’t think the protests were going to have an effect, but they have granted the East Side Gallery a stay of execution at the very least.

Hinkel, in interviews with the Berliner Zeitung and Berliner Morgenpost, sought to shift the blame, saying the 22 meter hole in the Wall had been ordered by the city to make way for the reconstruction of the Brommybrücke, that his luxury apartment block beside it had nothing to do with it. (Another, smaller, hole would be made for that.)
Of course, he didn’t say anything about this when sending his workers in to cut down pieces of the Wall before anyone could ask any questions.

Now it all boils down to money (which is all it ever boiled down to). Hinkel said he’d sit down with planning officials, members of the Berlin senate and Friedrichshain-Kreuzberg borough, as well as other interested parties including the “Sink Mediaspree” initiative at their next scheduled meeting on March 18.
“If the borough says stop with the Wall displacement, then we’ll stop,” he said.

However, the project to build the luxury apartment block will not be called off unless the city comes up with the cash.
“For a medium-sized company like ours it’s a question of cost.”
Even then, it’s not so simple.
“The problem is, we’ve sold 20 of the 36 apartments already. I can’t simply tell the owners: ‘Now please buy your apartment somewhere else.’”

Meanwhile, it turns out the “Sink Mediaspree” crowd, who object to most things containing a brick, didn’t object to the hole during the project’s planning phase, nor any of the holes already existing along the 1.3km section of Wall.

But that’s neither here nor there. Most people simply don’t want the East Side Gallery to be damaged any further.
As I ♥ Berlin put it in an impassioned defense of the reasons for saving it on Monday evening: “It is a fight in favor of a Berlin spirit that is endangered ... History and art are not negotiable for me. They have to be cared (for), curated and preserved for future generations.”
And thanks to The Hoff, now at least there’s Hoffnung. 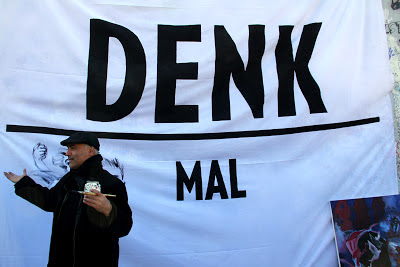 The “Denk mal” sign is a clever pun on the German word (Denkmal) for a historical monument while it also implores, “Think, once in a while.”
Labels: art Berlin Wall bureaucracy East Side Gallery gentrification politics