Five years a Berliner. FIVE YEARS! I’m a professional now, an old hand. Young Berliners are coming to me for advice, asking me what it was like in the old days, when it was wild and dangerous and still exciting.
It is still exciting, but there’s no doubt the city’s losing its shine. Those entrusted with its care do not care for it very much. Esteemed leaders everywhere are too esteemed to give a shit about anything but themselves, and Berlin has sold its soul to the devil, allowing its history fade away while pursuing short-term material gain – Tacheles, the East Side Gallery, C/O Berlin, Teufelsberg, Checkpoint Charlie... 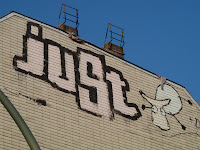 But that’s “progress.” Berlin has been deteriorating since I got here and the rot clearly started before.
On a personal level, I feel I have at least made progress by moving here. I’ve gained a lot and lost a lot but certainly gained more.
It’s been exciting, eye opening, invigorating, inspiring, confusing, revealing, frustrating, rousing, infuriating, fucking freezing, happy, sorrowful, good and bad. There have been huge highs and low lows. It has never been boring. For that reason alone I definitely made the right decision to move here. I’ve met a lot of cool people, though it’s harder to make friendships here than it was in Ireland, where loyalty means you’d walk through fire for someone but you wouldn’t text them if they moved to another country.
I miss Ireland of course, but only friends and family I left behind. The country itself has sadly descended into an even bigger joke now than it was when I left.
The Celtic Tiger was still roaring then, though we know now of course he was only roaring. Now he’s roaring drunk, crying in a bar somewhere asking himself how he believed his own hype. Or maybe he’s gone too – off to Australia or Canada like all the others forced to leave because leaders only looked after themselves.

I’m angry about what’s been done to Ireland, by its own cowboys, the EU cowboys, IMF cowboys, and other cowboys elsewhere. But Ireland is not unique. Moving abroad has thought me there are cowboys everywhere, with the big rancheros in Germany and New York. The West won and now it’s wild all over again.
Jaysus, I was actually in a good mood when I started writing this. Honestly. Five years is something to be celebrated. Five years!
Plans were pretty loose when I left. I’d had enough, just wanted to get the fuck out.

There’s no better feeling in the world than throwing everything in the air and seeing where it all falls. Some of it didn’t fall where I’d like it to have fallen, some of it hasn’t landed yet, and some of fell just right.
Now I’m proud to be a Berliner. I’ll never be German and I reckon the longer Berlin holds out against being German the better too.
Fünf fetten Jahre sind vorbei. Mal sehen wie die nächsten werden.
Labels: achievements Berlin celebrations Ireland sentimental shit