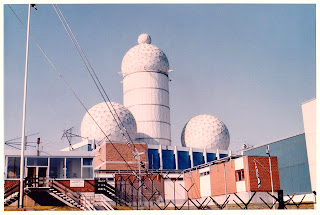 In the previous post, Teufelsberg veteran Lew McDaniel of West Virginia, USA, offered an insight into life at Field Station Berlin during its time as a Cold War spy station.
Here’s more of what he said, starting with a response to my request for photos of his time at Teufelsberg:
“I took no pictures of the site during my time there nor any of Allied military activity … We were cautioned to not be photographed if we could help it. However, Soviet mission cars were in the Grunewald area a great deal and photographed away when they wanted. They were pretty easy to spot – black low grade Mercedes with diplomatic plates and RDF antennae on the roof.
“Work there was a mix of excitement at times, coupled with normal business at others.
For most of my time there, I worked around the clock regardless of shift when there was urgent work to be done. I remember several three-week stints when I barely bothered to leave. Usually there was an even flow of things to learn and look out for that made the work very interesting – had my wife at the time not wished otherwise, I would have remained in the Army for a career. 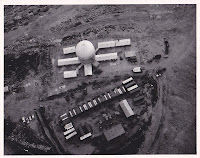 “We were keenly aware the Soviets and the East Germans considered T-Berg a prime, first shot target and could have readily obliterated us. Berlin was after all within very easy striking distance of several Soviet tank, artillery, and rocket divisions. Teufelsberg would have literally been vaporized within less than a second after the command to fire was given and that command would have been one of the first.
“We were a military installation with concordant rules and regulations, but for the most part we were left alone to do our jobs. While we were certainly in the Army, wore the uniform, and followed the rules for the most part, we did not feel like we were part of the ‘regular’ army that toted rifles and slept in tents and such. I don’t mean to sound like a snob, but our talents were more suited to what we did than to being regular line troops.

“We were also dedicated partiers and nightlife people. We worked rotating five-day shifts and at end of the five days, many folks headed for the bars or to gatherings. Not many folks left Berlin – we could only travel via the American or British duty train or via American flagged aircraft and were not allowed in East Germany or East Berlin – so leaving the city was time consuming.
“We lived in an apartment in Steglitz, so I was not subjected to life at Andrews Barracks where most were quartered, other than the first week I was in Berlin. My original assignment after language school was to the US Military Liaison Mission in Potsdam. However, the Army realized shortly after that that I was married and changed the orders. Married personnel were not posted to Potsdam. 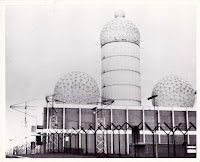 “Living on Maßmann Straße in Steglitz was interesting. I was issued two weeks of C-rations in case the balloon went up and given an airline ticket for my wife for the same situation. I always felt neither would be of any use – see the comments above regarding the forces around Berlin. When I departed Berlin, I had to turn in the rations and the ticket.
“The folks who lived in the other apartments there were nice. We were invited to their parties and family events and we often reciprocated. The Hauswirt and her husband were Czechs who came to Berlin before the Wall was built. We often took them cigarettes, bourbon, and beef and they cooked Czech meals for us now and then. We downed copious quantities of excellent Rumtopf they seemed to always be making. 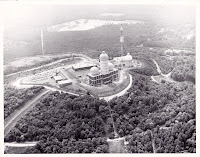 “Before that, we lived on a street over off Clayallee in a house that belonged to an old couple who had lived there through WWII. They said their house was occupied at one time by Russian troops who were civil enough, but didn't seem accustomed to a regular house.
“What we did and how we did it remains cloaked in secrecy still. I can tell you the Army was in dire need of Russian linguists when I signed up in 1967. Which I did after receiving my draft (conscription) notice – draftees during the Viet Nam war did not usually have a choice of what they did in their two years in the Army, so I enlisted for four years in order to get a better opportunity to do something interesting. I originally wanted to be a helicopter pilot, but discovered during testing for that that I am color blind and that disqualified me... So I was asked if I wanted to be a linguist. I said sure, how about German, since I had four years of German courses in college. But they needed Russian linguists and sent me to the Defense Language Institute in Monterey, California for nine months. Last time our vets group held a reunion at the institute, Middle Eastern language courses were the largest group – not much Russian taught there now that the Cold War is over. 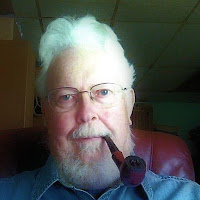 “Hope this was informative.”
Mr. McDaniel (right) now lives with his wife 26 miles south of Morgantown, West Virginia, in the middle of a forest.