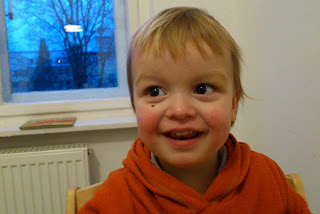 Mad how you can double in age overnight. Last night he was a one-year-old, now he’s two. Two! Jaysus, what a difference a night makes, even if it took a year to pass.
He’s still great and we still love him, even if the guarantee ran out and we’ve no hope of returning him now.
Now he’s a man, or at least on his way to becoming a man. He already cusses like a man, sometimes he spits on the floor, and he mightn’t scratch his balls in public yet, but he farts without shame. 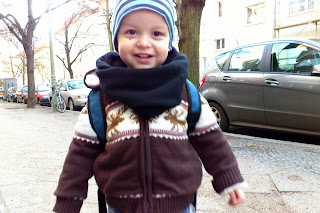 Yes, we’re really proud of him, for different reasons. He keeps both sides of the cultural divide happy like a true master of diplomacy.
I think it’s fair to say he can talk now. He’s certainly never shy about voicing his opinion in any language. He speaks several, some known only to himself, but German, English, Irish and Spanish are among them – I regret to say in order of proficiency.
I guess it’s no surprise German is gaining the upper hand seeing as he’s bombarded with it every day. These Germans are taking no chances are doing their best to mould him in their way. They’re merciless, offering his brain no respite as if trying to ease their own suffering by shifting it on to someone else. 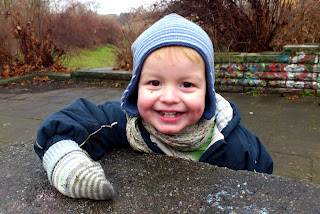 Not content with hammering the language into his little head, they’re teaching him things too, especially at the Kita, where they’re doing their best to stamp out any burgeoning imagination with facts – hard facts, soft facts and in-between facts.
He can count, to sieben or something like that, and I think they’ve been teaching him colours too. They’ve also been force-feeding him songs, more songs than a singer can sing.
But it’s a cruel world, and rather than let them win, I have to teach him things too. I’m proud to say (genuinely) that he can count to three, usually by omitting two, but this makes me prouder still, as he achieves the same result in the quickest possible way. 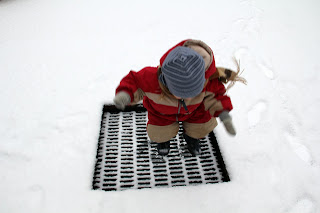 He’s incredibly receptive to advice, and I guess it’s understandable as he’s still relatively new and still finding his way in the world. I try to give him the benefit of my hard-earned experience. I tell him to stay the hell away from priests, politicians and police. I haven’t mentioned the prostitutes or pediatricians yet but that can wait until he’s older.
Thankfully the Germans haven’t managed to teach him any manners yet, and he actually seems to like singing, despite not knowing any words or having any natural talent. I guess it didn’t stop Bono…
“He knows a shitload of songs,” Jenny said when I asked her for a contribution to this birthday tribute. “He knows about 40 and all the words too.” 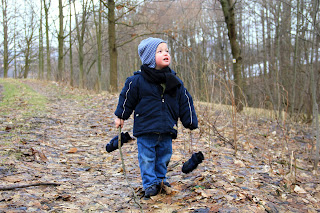 Well, he might know the words. He just doesn’t know how to say them yet. Still, it doesn’t stop him singing at every opportunity. The tunes are instantly recognizable and he’s receptive to new lyric suggestions. The “Arsey Song” is my particular favourite. It’s quite easy as “arsey” is the only lyric.
“He’s cheeky,” Jenny added firmly (and not for the first time).
True, he’s no angel. He’s already come to the unfortunate realisation that “verboten” means more fun can be had. 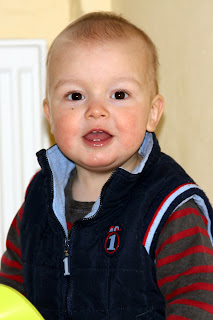 But then angels are boring and his heart is in the right place. With reasoning and valid arguments for doing something a certain way he’ll go along with it. Otherwise not. And he likes to help out; he just wants to be involved in everything. He’ll take stuff out of the fridge, put it back when we’re finished with it, throw rubbish (and other things) in the bin, and even help sweeping and mopping.
He takes good care of Moley and Hedgehog, his best friends, and ensures the rest of his animals and dependents are well fed and watered. When not caring for his toys he likes bashing the shit out of them. Noise is a source of great amusement, unless you’re not one of our unfortunate neighbours.
Yeah, he’s a messer alright. I don’t know where he gets that from. Lately he’s been laughing so hard at things he falls over. Fantastic sense of humour. He thinks peas are hilarious because they have the same name as pee. 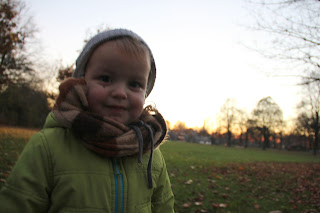 I could write and write and write, but if I keep going he’ll be three by the time I finish. I could mention he likes licking his own snot when he has a runny nose, or wiping it on my shoulder before I go to work, that kicking, jumping and throwing are complemented by puzzle-solving, books and quiet contemplation, that he has a soft spot for elephants, that he pretends to fall asleep before getting up again, and that paella and spuds are still his favourite dishes, though “peas and cabbots” are a new found love. Cabbots sounds so much better than carrots, I think I’ll be using cabbots from now on.
He’s a scamp, there’s no other way to describe him, a scamp with an infectious joie de vivre which will always have us grateful for the day he was born two years ago.
Happy birthday little fella, you’re the best.

Pictures above are all recent, except the one horizontal picture, taken when he was just over a year old. I include it for comparison purposes, because only after going through a year’s worth of photos do I realise he’s changed so much – indeed, that he’s changing at a frightening pace. Honestly, every day I’ve seen him for the last two years he has looked perfectly normal, so now I realize I must be the strange one…
Anyway, above pics are mostly recent, below are previously unseen pics from the last year. 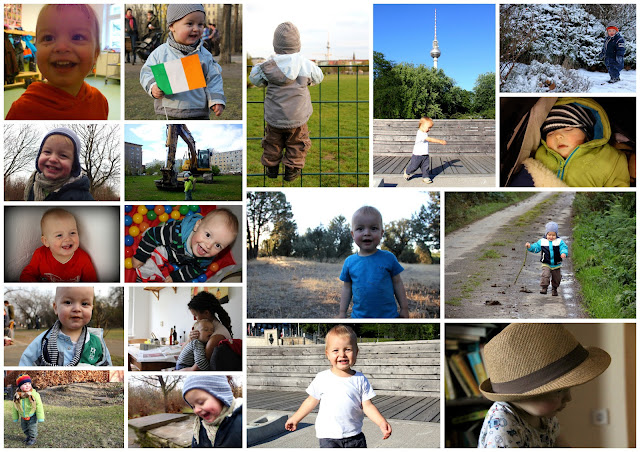