Christmas night has to be the fartiest of the year. All those gases and fumes vying for freedom, itching for expression, struggling to be heard…
To make matters worse, poor ol’ Nip also had to contend with a badly timed dose of the runs, causing a sleepless night punctuated by innumerable nappy and pyjama changes. I think it’s fair to say it all ended on a bum note.
Not that it was a shitty Christmas. Far from it – I think I even enjoyed it. I can’t yet be sure. Perhaps I’m being flathúlach from the elation of mere survival, or perhaps my expectations were too low to begin with, but it was quite refreshing to have a remarkably unremarkable Christmas.

It comes at the cost of Schadenfreude, however, and so I can’t beguile you with tales of trees stinking of cat-piss, or stories of burnt dinners, or of sharing choc-chip cookies with grateful pigs. Not this year anyway.

Germans give out their presents on Christmas Eve. They’re so efficient they open them before Santa’s even had the chance to deliver them.
We’d gone out to the in-laws, where the Nip got a ton of stuff, more stuff than you could shake several sticks at, and where we were served several varieties of cake followed by a very tasty buffet. I mean the food was very tasty, not the actual buffet, though for all I know that was tasty too.

I don’t know what Jenny’s folks have on Santa but they managed to get him to show up, despite his busy schedule. They had to get the real Santa to turn up after I politely declined their invitations for me to play the part. Imagine me as Santa! Jaysus.

Nip was nonplussed by the bearded fellow’s presence, but not as freaked out as I thought he’d be. He was happy with the presents, though they run the risk of spoiling him. Better to get nothing and be grateful for your health, your family, your friends. The young lad hasn’t been found wanting for anything yet and I wonder if that’s a good thing... 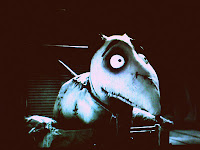 To round it off – once we’d packed the Nip off to bed – we started Frankenweenie. (It was too scary to watch in one night so we split it over three and only finished it last night. Brilliant film. I’d watch it again.)
At the end of it all I basked in the knowledge that it was 365 days to the next one. And then the shit hit the fan. Merry Shitmas.

Hope you all had a good Christmas, wherever ye are, whenever you celebrated/will celebrate. I know it’s late, but it’s easier to be festive when you’re no longer obligated to be festive – now is the time to enjoy it.
Nollaig shona agus Athbhliain faoi mhaise daoibh go léir.
Labels: celebrations Christmas nipper