Wolfswinkel and the monsters: The abandoned paper mill

Monsters now call the abandoned paper factory of Wolfswinkel home, transforming it into a magical fantasy land only the intrepid would dare enter.

Well, you could just ask at one of the businesses out the front if you can go in for a peak but where's the fun in that?! Far better to sneak in as we did and have the wits scared out of you by the marvellous mystical creatures who have appropriated the crumbling buildings left over from a country that no longer exists.
I was thankful for the company on this occasion, accompanied as I was by fellow lovers of decay and ruin, andBerlin and the Digital Cosmonaut. Alone, I'm not sure I would have survived the experience.

After squeezing in at the back beside the river through a loose fence we tiptoed into their lair, though we weren't aware of their presence at the time. We stepped around the broken glass, careful not to make it crunch underfoot. Futile. Then we saw them through a broken window, the first monsters, eating a rainbow. As monsters do.

We proceeded, cautiously, perhaps foolishly. I peeked into a doorway that led into what most have once been a warehouse. There we encountered the next one, standing with arms outstretched and head back in deep existentialist contemplation. How he could think at all is beyond me, for just a few short metres away was a strange bird-like creature playing guitar, with an even stranger being firing what looked suspiciously like an old blunderbuss into the air. I was about to ask the strange-looking fella where he got it – they're few and far between these days – but thought better of it. I wasn't sure if he was shooting an accompanying beat to the music or warning shots to keep intruders away. Besides, the bird-like creature had a sharp-looking sword and more monsters were lurking nearby – one of them with an axe. I left them to their party.

We went on and found ourselves in a gathering on old redbrick buildings, their soft shades complemented beautifully by the encroaching moss and vegetation. If it's not the monsters...

The outer buildings are in a sorry state, smashed and shorn of roofs allowing the elements wreak their thing. But the main one is still fairly sound, broken window panes notwithstanding, and it's there that you get an appreciation of the factory's former glory and its raison d'être. It's also home to monsters. Loads of them.
The Wolfswinkel paper mill was the only in the area to produce handmade paper until the monsters took over in 1994. I'm not sure if they actually caused production to cease or some other terror brought about its demise. Their timing is certainly suspicious.

Whatever was responsible, it ended a production line going back to 1751, when the Spechthausen paper mill began operation in Eberswalde. Friedrich II of Prussia, a.k.a. Frederick the Great, gave Jean Dubois of France the official seal of approval in 1781, and before you knew it – well, in 1799 – it was also producing banknotes and securities as well as the aforementioned handmade paper.

From 1874 to 1945 it produced treasury notes and nearly all banknotes, letters of credit, cheques, stocks and other other securities for the German Reich.

Spechthausen provided the paper for Operation Bernhard, a dastardly plan hatched by the Nazis to destabilize the British economy during the war using forged banknotes made the master forger Adolf Burger in the nearby Sachsenhausen concentration camp. I don't think I've come across a plan more dastardly. Burger's still on the go, 95 years young, and living in Prague. They made a fine film out of the whole thing called The Counterfeiters, Die Fälscher in German. And you thought this post was only about monsters.

Spechthausen, like pretty much everything, was gradually wound up after the war. The production of the handmade paper was transferred in 1956 to the Wolfswinkel plant, which had been in operation since 1765. Wolfswinkel began production of the Spechthausen brand from August 1 the following year. The age-old traditional methods were retained and each sheet of paper still featured the famous “Spechthausen 1781” watermark comprising a woodpecker (Specht) and a tree.

I looked up the processes involved but they're probably not worth getting into without risking boredom. We certainly don't want that here. If you're into the processes, you'll be able to find out plenty somewhere else on the oul' interweb I'm sure.

Of course, the Russians took over the original Spechthausen plant. It's telling that the monsters waited until they were well gone before they even thought of moving in.

Papierfabrik Wolfswinkel-Spechthausen. Abandoned paper mill that once produced the famous Spechthausen handmade paper, a brand which went back to 1781 when Frederick the Great gave it his seal of approval. Since taken over by monsters.

Where
Wolfswinkel, 16227 Eberswalde. It's on Eberswalder Straße, roughly number 33-34-35. Not sure which, but once you get there you can't go wrong.

Get the RE3 regional train in the direction of Stralsund to Eberswalde. It goes from both Berlin Hauptbahnhof and Gesundbrunnen, takes half an hour from the former, less from the latter. You can get the 861 bus from Eberswalde station to Finow, Wolfswinkel. Once you get there walk along the road until you see the gate with scarily accurate “End of Summer” sign. That's what you're looking for right there. You can also just cycle along in a westerly direction from the train station until you find it..

As I mentioned earlier, you could just ask in front if you can go in for a gander. I don't they'll mind as long as you don't look like you're going to thrash the place. There are people living there (despite the monsters) and I'm sure they don't want hordes of people poking around their stuff. Otherwise you can just sneak in around the side – watch out for yer man snoozing in his van – and snoop around without getting caught. More exciting in my opinion.

Don't go when it's raining (as we did) or you'll get soaked, especially if you cycle (as I did). Best to go during the day. I don't think this is a party venue, unless you ask the folks out front and they're more obliging than I thought.

Difficulty rating
5/10. Quite easy, both getting to it and in.

Who to bring
Someone who's not afraid of monsters.

What to bring
Bring a torch, a camera and a couple of beers. Something to eat would be good too. I didn't, and was flippin' ravenous by the time I got back to the train station. I'm getting hungry again just thinking of it now.

Dangers
Nothing major to worry about. You always need to take a certain amount of care in these places in case a roof lands on your head but this was one of the more structurally sound structures I've been in. Of course, there's always the little matter of the monsters. 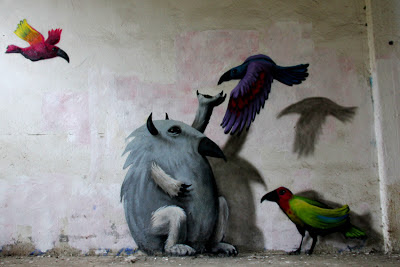