The tree is up. It’s actually been up a few days now, decorated and all, but my enthusiasm for all things Christmas is finding itself hard to rouse this year. I haven’t been arsed taking pictures or writing about it up to now.
I actually got the tree a couple of weeks ago, on my way home from the German course. I popped into Kaiser’s for a couple of beers and they had potted trees so I figured I may as well kill three birds with the one stone. I had the beers on my back and the tree in my arm as I cycled home. Luckily there was no urgent need to pull the break with the other arm.
It’s a pretty small tree again this year, perhaps even smaller than last year’s. So it’s on the same display case. It’s so small the Nip hasn’t noticed it yet, hasn’t ripped it asunder. I guess it’s only a matter of time. 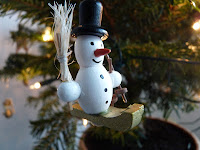 Last year’s tree didn’t survive the experience. It’s still replanted out the back, but it’s only a tree skeleton, a macabre warning to other potted trees with aspirations of surviving Christmas. It’s such a shame. I genuinely don’t see the need to murder trees at this time of year, Santa’s birthday notwithstanding.
If this year’s tree doesn’t make it, I think I’ll get a plastic one next year, though the environmental damage from its manufacture would probably be greater than deforestation’s. Still, it would give me an excuse to play that Radiohead song.
I want to enjoy Christmas, I really do, but my enthusiasm for it wanes by the year. You know when you’re force-fed something you lose your appetite. It’s so inescapable I want to escape. It’s gotten to the stage where I think all Christmas songs should be shot – especially that fucking Tannenbaum song – as should all Glühwein sellers who think €3 is the minimum to be paid for their slop. How can it be more expensive at a Weihnachtsmarkt than in a pub, which has the added benefit of warmth and comfort? But there you go. It is. They take advantage of the prevailing idiocy.

Yesterday, as well as four pig-candles, I got a bottle of buffalo grass-vodka to help me survive. Tonight it smashed to smithereens on the kitchen floor. I’d made the mistake of asking the Nip to take the cheese out of the fridge.
“This isn’t cheese,” I said as I held up what was left of the smashed bottle.
“Bamashed,” he replied.
“Yeah, it’s bamashed alright.”

Jenny’s trying hard to overcome my allergy to Christmas. In fact, I think my apathy may be driving her. And vice versa. There’s all kinds of Christmas shit up everywhere, the Hallowe’en pumpkin’s been relegated out of sight and she’s voluntarily listening to Christmas songs. There’s a load of presents wrapped up, and she even made some sort of house thing out of cake that we’ll eat on Christmas Day if the flies leave any of it. I thought at first she was doing it to annoy me, but she’s genuinely excited about the whole thing.
So I’ll just have to grit my teeth and enjoy it too.
Labels: Christmas Christmas tree