Teufelsberg update: The devil in the mountain's details 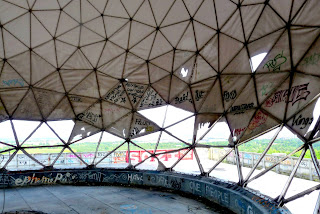 I’m not sure the owner of Teufelsberg would approve if he knew exactly what was going on there. But he’s got bigger fish to fry and so he’s entrusted its care to a third party which, he says, has a “freie Hand” to run tours.
The third party is Berlin Sight Out, which advertises its weekend tours, but keeps its “unofficial” weekday tours on the quiet, particularly after all that unwanted attention it received after thousands turned up for a mega party in August.
Hartmut Gruhl, the Cologne-based architect whose company owns Teufelsberg, was surprised when I told him two guys posing as security demanded money for me to go visit the site.
“They’re lying then,” he said.
But perhaps they weren’t.
It turns out that the two goons who threatened me on Wednesday work for Berlin Sight Out. They just lacked the wherewithal to tell me at the time.
Shalmon Abraham leases the site from Gruhl on behalf of Berlin Sight Out, and he was even able to describe one of the goons, the less-threatening one, who happened to be a friend of his, Ahmed. 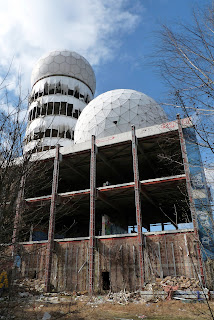 “He’s very sweet. He’s certainly no squatter!” he laughed.
I asked him if there was anyone living on the site. He categorically denied it.
“There are only temporary places,” he said. “The squatters moved out last year.”
Gruhl and his business partner, Hanfried Schütte, bought Teufelsberg as an investment for 5.2 million Deutschmark in 1996. But their plans to build apartments, restaurants, a five-star hotel and spy-museum have stalled since for one reason or another.
He appears to have washed his hands of the whole thing while its long-term future remains uncertain.
“I can’t tell you anything about the security or tours at Teufelsberg. That’s all in the hands of a Berliner. He looks after security and has a free hand to do what he wants with tours and that,” he said, before giving me Abraham’s details.
Yet Gruhl was surprised when I told him security guys were demanding money to go look at the ruins.
“That can’t be happening, they’re gone now,” he said, referring to eMGe, the previous security company.
I guess the only reason there’s security at all, seeing as the place is thrashed to shit, is for insurance purposes, to prevent Gruhl and Schütte from liability if anyone was killed or maimed there. 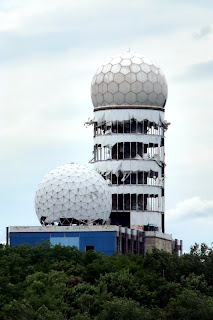 Berlin Sight Out venture makes sure no one wanders around. Visitors have to be accompanied by a guide, or – to put it another way – they have to pay.
I’m not sure if Gruhl and Schütte are liable if the security guys killed or maimed someone.
“We take care of security,” Abraham said. “We can’t have people simply running around. It could lead to problems.”
He pointed out that tours are “much safer” and that “it’s illegal to come through the fence.”
It’s fucking hard too, making it more likely people will cough up the €15 to take part in one of the two-hour tours at weekends.
“During the week we make sure it’s closed,” Abraham said.
Artists are allowed onsite, however, as are people who pay €7 for a “kurze Führung” if at least ten people show up at the gate. The short tours are one hour long, with less information than a proper tour.
Abraham didn’t want them publicized, however. “We don’t advertise them.” 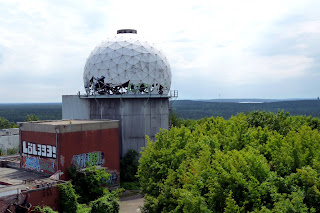 I guess this is why his friend had been demanding money, despite the fact I wasn’t accompanied by nine others and despite not mentioning any tour. The word he used, in fact, was “Eintritt” (admission), which leads me to believe I wasn’t being offered a tour.
Abraham dismissed the notion that any security guards could possibly be pocketing any money for themselves. “Definitely not!”
He said there used to be signs informing visitors of the tours “but these were destroyed. We’ll have to make a new sign so people are more aware.”
I’m not the first to run into problems but Abraham didn’t apologize for his employees who – if we’re being pedantic – assaulted me.
“Security people by their nature are quite often aggressive,” he laughed. “This happens every day ... sometimes it escalates.” 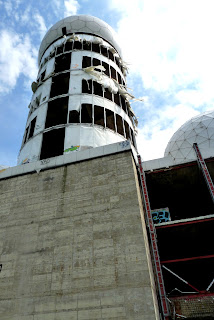 He was much friendlier than his employees, however, evidently keen to avoid further scrutiny after thousands showed up for the party on Aug. 4, when he “underestimated the power of the internet.”
“I’d never seen such a long queue before,” he said, admitting and it led to “a bit of stress” from the authorities.
But he’s within his rights to charge money for bringing visitors around Teufelsberg. The fortified and oft-repaired fence discourages people from conducting their own unaccompanied, impromptu tours. The security too, of course.
The situation might not change for some time, with Teufelsberg’s future still uncertain.
“We don’t know what’s going to happen,” Gruhl said. “Herr Schütte is involved in negotiations with the senate and the district.”
This is Berlin so I think it’s safe to say all boils down to money - for everyone involved.

So there you have it folks. I’m not sure it’s a satisfactory outcome, but we know a bit more than we did before. I’m sure there’ll be more updates to come.
Labels: abandoned buildings Cold war confusion fear fight history security shady shit Spy station Teufelsberg