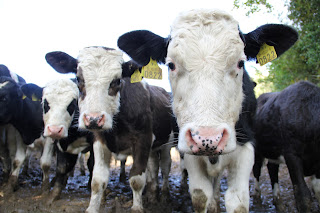 Cows were the theme for the latest visit home. We first encountered them at my aunt and uncle’s in Kilkenny, and then at the homestead in Wexford. The young lad was enthralled, a look of delight on his face when he heard the first moos, and he laughed with sheer joy when he came face to face with their creators. 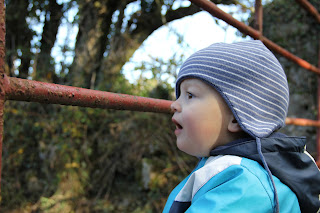 They were as curious as he was once they got over their initial caution. They slowly came up to the gate where we waited to greet them, then backed off if the little fella made a sudden movement. They were 20 times as big as he is and we were outnumbered 20 to one but still, they weren’t taking any chances. Cow-ards. Then they’d venture forward again, curiosity driving them forward. 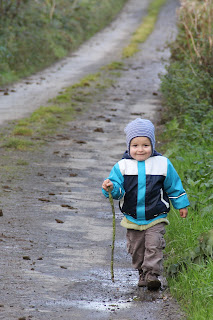 He was so happy, and quickly went about gathering grass and stuff to offer his new subjects. They were too amazed to react, just kept staring and standing, staring and standing, heads bent forward just looking at this strange little man waving food and sticks in front of them.
We bid adieu to our new friends and continued down the lane to the river. No houses, no cars, no humans - and sun! It was great. Sheep were eating blissfully in the fields, birds fluttered around, a couple of dogs said hello, there were puddles to jump into, sticks to bash off the ground and a stream to throw rocks into. When we moved onto the river he threw rocks into that, before he got tired of going back and forth for more rocks and simply threw grass in instead. Smart kid. 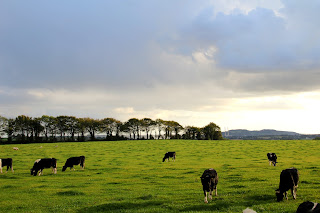 The muck was a bonus. All that lovely muck! He traipsed through it, stamped in it, jumped in it despite my kind requests not to, before we went home covered in muck and shit - literally. Fuck it, it’s natural.
He’d the same look of joy when he first saw the swans at Bray Harbour, without a hint of fear. I actually had to pull him back to safety as hundreds of them came up pecking for food. One hungry fecker in particular was really having a go. 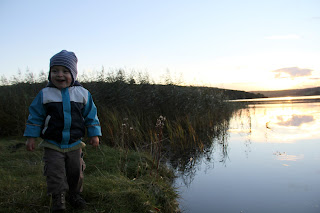 But the cows made the biggest impression. His moos are quite impressive and he also learned to say muck. He learned another word that rhymes with muck just before we left for Ireland - bad timing to say the least - but thankfully he didn’t seem to cause any offence. I’m still trying to get him to say feck instead. Seems to be going to plan...
His Irish is coming along very well. He now says “oíche mhaith” like a professional, though his timing can be off sometimes. He likes saying it so much he says it in the morning too. But he always says it now when I wish him good night. 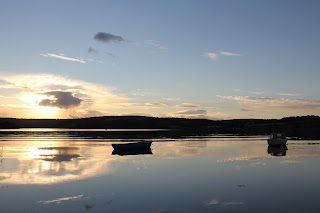 He asked for Jenny from time to time, wondering why she wasn’t there to share in the fun.
“She's doin’ her thesis,” I’d tell him. “She’s in Berlin. But you’ll see her in a few days.”
Then a tractor would go past and he’d be distracted again. He loves tractors!
We got the train up from Waterford to Dublin, with him mooing at the cows in the fields as we passed. I got myself a coffee and we shared a chicken and stuffing sandwich as he knocked back 12 little containers of UHT milk, one after the other like shots of whiskey. He had his milk, I had my chicken and stuffing sandwich, we were happy. 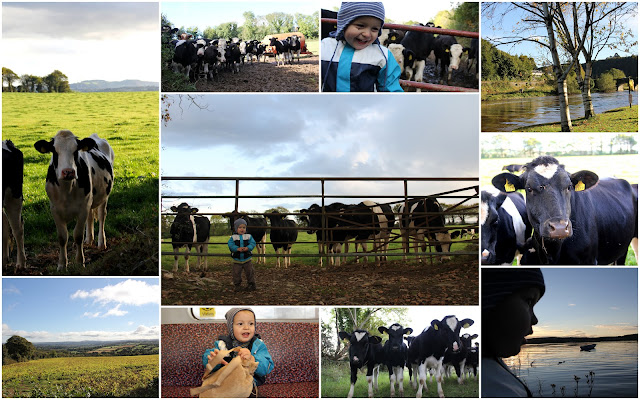