Köln just feels wrong. I don’t know why exactly but it just does. Could be history has stained it to damnation, could be the infuriatingly confusing array of roads around the train station, could be the locals’ bad breath, could be anything.
I was about to write it off completely, add it to my ever-growing list of cities to be avoided at all costs. I’d taken a wrong turn coming out of the train station, found myself in a neverending tunnel hugging the wall as cars roared past. I kept going. I didn’t know at the time it was neverending. I just wanted to get through. I found an emergency exit with stairs leading up to safety, but the hatch on top was locked. What’s the point in an exit that’s locked?! So I’d to keep going, bracing myself every time another car zoomed by, cursing the trucks that pressed me against the wall with their tailwinds. I came out eventually, of course, or I wouldn’t be writing this. 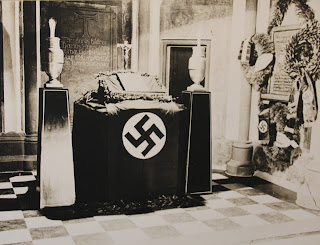 There’s a Nazi vibe about the place, as if they were still in charge. The concentration camp gathering centre across the river at Deutz doesn’t help, nor do the football hooligans, nor all the Polizei always swarming about the Bahnhof. They had one of the passages sealed off when I was leaving, a line of them standing in front of tape stretched across to prevent passengers accessing trains. Some poor fucker must have been murdered.

At least Cologne doesn’t bury its Nazi past like other cities do. (I’m looking at you Munich.) It can’t. (I found myself in an excellent museum on my last visit to Köln, full of Nazi stuff and stories. I wanted to write about it but never found the time.)
All the seats on the train out were facing backwards, just to exacerbate the feeling of unease as I was leaving. It was raining too, though that should have made me feel at home as an Irishman. But it didn’t.

Radiohead, the reason for my brief visit, were fantastic once again, but I won’t bore the arses off you by writing more about them. They bookended my trip home and I still need to write about that….
I wasn’t lying when I mentioned the Cologners’ bad breath. It’s the tooth, I gagged on more than one occasion. Et Kütt wie et Kütt, they say. Laissez-faire can go too far sometimes.
There was a bad vibe from Cologne this time, but I’m not writing it off. Far from it. It ain’t Bonn, Leverkusen or Minden. It warrants a fourth chance. The third didn't reich.
Labels: Cologne Germany Hitler Nazis Radiohead shady shit Small Beer Country