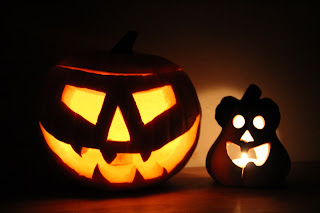 Hallowe'en is my favorite day of the year. I love it, always have. There's none of the bullshit that accompanies other occasions, no four-month marketing campaigns making you sick of it before it's even begun, no need to buy presents, no need to be nice, no obligations whatsoever. In short, it's fun! It hasn't been commandeered by bible-bashers either. Coincidence? Probably not.
I reminisced about Hallowe'ens from my reckless youth this time last year, when I was so discouraged by Germans' utter cluelessness regarding Oíche Shamhna that I didn't even bake a brack, as I'd done the year before when I wasn't yet aware of their blasphemous ways.

Their ignorance surprises me. Hallowe'en is the type of occasion I imagine Germans would love. I guess they have their equivalent on Walpurgis Nacht, but it isn't quite the same. I'm not having a go at Walpurgis Nacht, far from it – it's a fine festival – but Hallowe'en has always been something special and any other occasion is going to suffer in comparison.
At least the poor oul' Germans try. I discovered "spookily good" Hallowe'en cheese in Lidl. Cheesus H. Christ, I thought. I didn't buy the cheese but I'm sure it was frightful.
They did have Hallowe'en stuff in Galeria Kaufhof but the prices would leave you pale as a ghost.
I actually wanted to organize a proper Hallowe'en party, with monster hits and a roaring bonfire, but have to work tonight. Bayern Munich are ruining my life.
But damn it, I can't let them ruin Hallowe'en, so I purchased TWO pumpkins, both of them reduced as a happy consequence of Germans' Hallowe'en apathy.

The real pumpkin from Kaisers was reduced from €5 to €2.50 and the tacky pottery tea light holder from Netto was reduced from €1.99 to 50 cents. Score! I also lashed out €6 on a skeleton. A bit pricey, but fuck it, Hallowe'en only comes around once a year.
I baked a Hallowe'en brack, the first thing I've baked since the Hallowe'en brack I baked two years ago. In fact, the only thing I think I've ever baked has been Hallowe'en brack.
I followed my great-aunt Joney's recipe as best as I could. Joney was a fine woman and she made a great barmbrack. Ingredient availability in Waterford is somewhat different to that in Berlin, so I had improvise with local ingredients. This year's brack is one of the best yet though so I hereby present for you, dear readers, my recipe for Berlinerized barmbrack...

Joney's Berlinerized Hallowe'en Brack.
Ingredients: (Rough quantities, complete with German translations so you know what to go shopping for)
100g sultanas (Sultaninen)
100g currants (Korinthen)
I would have thrown some raisins in too, but couldn't find them anywhere for love nor money.
Grated orange peel from one orange. (Just don't grate too close to your laptop as I did.)
100g ground almonds (Mandelkerne gemahlen)
500g flour (Weizenmehl)
Two eggs (Eier, but sure you knew that already.)
250g sugar (Zucker)
15g Lebkuchen Gewürze (This is to replace “mixed spices” of cinnamon, nutmeg and cardamon, I think it was. The German Gewürze give the brack its distinctive Berlin taste.)
Pack of baking powder. (I forgot the German for this, and I threw out the packet, and brought out the rubbish since. I ain't going outside to root in the bins.)
Two cups of cold tea. (This has to be proper black tea, none of your English muck from Tesco. If you can't get Barry's Tea, then the Ostfriesische stuff from Bünting is your next best bet.)

Action:
You'll need to start the night before as the sultanas and currants need to be soaked overnight in the tea, which has to be cold for some reason. Anyway, just throw all the fruit into a bowl with the tea, mix it all up, and leave it soak for the night.
The next day, take the rest of the ingredients, fuck them into the bowl and mix them all up. You could probably sift in the flour gradually as you're mixing so you don't break your arm trying to stir it all in together.
Get an oul' tin somewhere, grease the sides and bottom with butter (so the arse of the brack doesn't stick to it when you're taking it out) and fling in the mixture, which should be sticky and wet, but not liquid wet. If you're pouring the brack mixture into the tin then you've done something wrong.
Preheat the oven to 180C. I looked this up and found 180C is between gas mark 4 and 5. We've a gas oven. It never stops telling jokes.
Throw the brack into the oven once it's hot, let it cook for an hour and it should be done. Test it with a knife or something to be sure.
Some people like a bit of butter on their brack. It goes without saying that it's best served with piping hot tea (the proper stuff). Enjoy!

I'll update this post with pictures later, when it's dark and ghouls are roaming the Earth.

UPDATE: The post has been updated. The ghouls are still roaming. Actually, THERE'S ONE RIGHT BEHIND YOU RIGHT NOW! RUUUUNNNN!!!
Labels: celebrations festival food Germany Hallowe'en