Haunted by history, the ghosts of Beelitz-Heilstätten 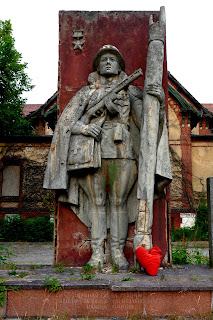 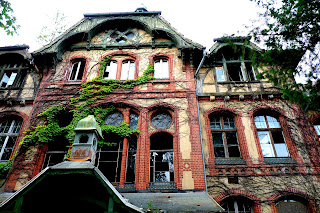 Everybody and their dog knows about Beelitz-Heilstätten, which is why I haven’t written about it before. Not everyone has a dog though. Some have other pets, less inquisitive or knowledgeable than dogs. So this is for the goldfish.
Beelitz is where Hitler and Honecker were treated for injuries/ailments sustained in World War I and East Germany’s last days, respectively. The huge military hospital complex is abandoned now, shrouded in mystery, haunting, eerie, waiting to see what fate holds for it next... 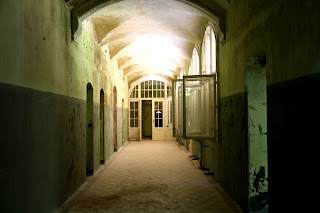 A swarm of flies rose to greet me on my maiden visit, buzzing about me furiously as if to guard the secrets of the past. I’d just stepped into the flaky corridor, long and well-lit by the grace of sunshine and contemporary window frames with glass intact. Glass is not normally intact in such places. 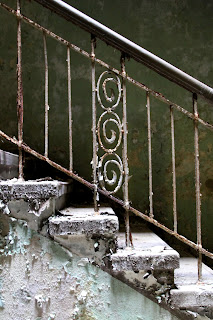 The flies went berserk, in my face, my eyes, my mouth. I tried swatting the fuckers away but there were too many of them, probably still feasting on the flesh of a discarded patient and angry at the rare disturbance. 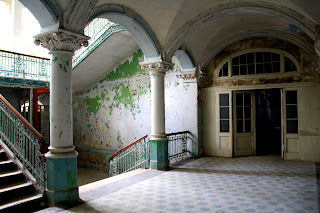 I had to withdraw from the infuriated cloud and then it struck me: These were no ordinary flies. They were Hitler’s henchmen, his henchflies if you will, guarding the entrance to the site were he was once at his most vulnerable, preserving the stillness and serenity for him, and driving visitors from rooting around in the past where the past had no wish to be disturbed. Fucking Nazi flies.
But damnit, I wasn’t going to be dissuaded by flies, Nazis or not. 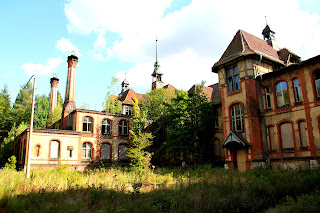 I regrouped, gathered myself, and plunged through the swarm, swatting wildly even as the fuckers followed me. Eventually they desisted, left me on my way, and returned to gorging on whatever dead thing had been lying in the corridor. 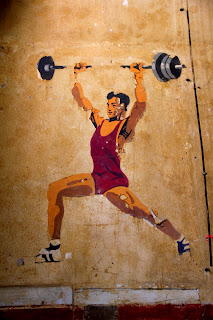 I hurried on, there’s a lot to see. And smell. The smell of disinfectant still lingers in the operating rooms, permeating through the airy corridors, a caustic whiff in sharp contrast to the gentle palettes of old paint flaking off the walls and fantastic window frames. Beelitz’s dusty tiled corridors really are quite beautiful, and the abundance of fading glory and subtle shades make it a photographer’s dream. 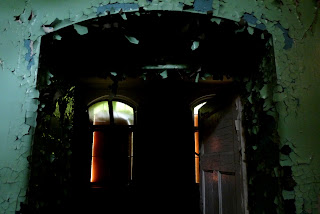 It’s not quite forgotten – some of the buildings have been painstakingly restored – but the rest of the site, once home to more than 60 buildings, is in various stages of decay or preservation. I guess there just isn’t enough money to preserve them all, and it’s not something someone will do unless there’s something in it for them. 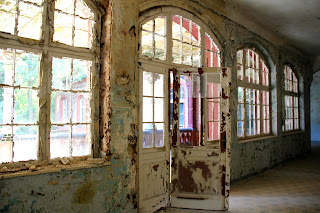 Its history begins in 1898, when Berlin’s health insurance authority bought around 140 hectares here to build a tuberculosis sanatorium and nursing home. The newly built 600-bed capacity treatment centre opened in early 1902, with separate facilities for men and women. 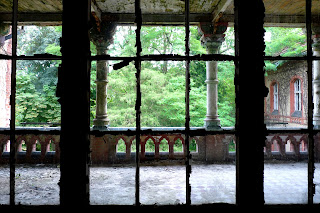 It was expanded over the following years to cater for Berlin’s sickly population, but all the patients were kicked out on August 3rd, 1914, shortly after the outbreak of war, when it was taken over by the Red Cross and 1,525 beds were made available for the new patients. 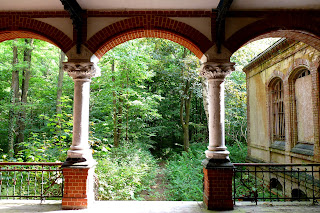 Hitler was among 12,586 of them to be treated here during the war, the poor blighter injuring his thigh after some inconsiderate buffoon threw a grenade at the Battle of the Somme. I’m sure he wasn’t complaining as he recuperated in nice peaceful surroundings under the supervision of the Beelitz Mädels.You can see a picture of him at Beelitz here. 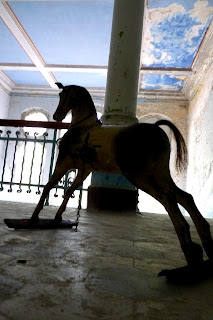 Of course Hitler was a nobody then, so the nurses probably just ignored him and made fun of the fucker’s Austrian accent. The real heroes were off fighting at the front and not whining in luxurious hospitals. He managed to while away almost two months there until December 1916. 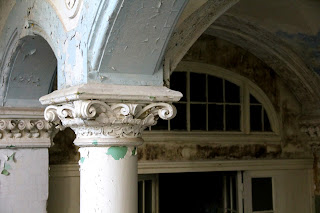 Beelitz returned to civilian use in 1920 and underwent further expansion. Another 200 hectares were purchased in 1928 and by the following year there were 1,338 beds available, two thirds for lung treatments.
The next war saw it commandeered to care for wounded soldiers again. Of course, Hitler was a big wig by then, and indirectly responsible for sending new patients back to his old stomping ground. Not that he had been doing much stomping with his gammy thigh. 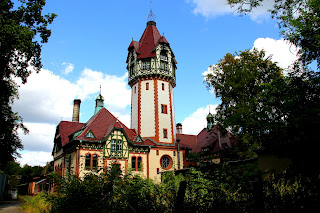 The Russians took over after the war, as is their wont. The Red Army took over anything that could be taken over. How they managed to do it all is beyond me.Moscow must have been empty at the time. 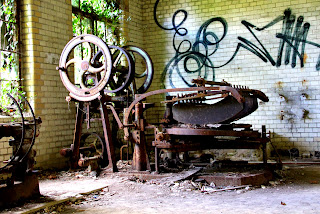 Beelitz became the largest Soviet military hospital outside the USSR, and they weren’t all that keen to let it go either – they didn’t leave until 1994.
The seriously ill Honecker was admitted here with liver cancer in December 1990, having just seen his country cease to exist. He fled with his wife Margot to Moscow three months later as the vultures of justice began to circle. The Russians – evidently it wasn’t empty – returned him, but Honecker’s story is too long to get into here. He died in Chile in 1994. 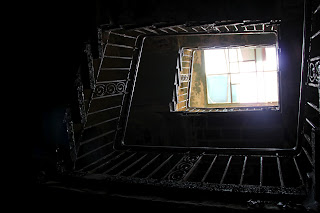 Beelitz lost its raison d’être with the departure of the Russians that same year. Investors stepped in and duly went bust in 2001. Recently it seems to have been taken under the wing of a group committed to preserving the buildings somewhat.
Traces of the Russians remain, with murals on walls and an iconic soldier standing guard outside, but otherwise the ghosts that still roam Beelitz are guarding their secrets so closely they’ll probably never be revealed. 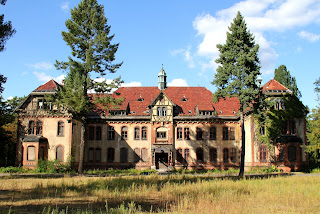 What
Beelitz-Heilstätten, former TB clinic and sanatorium turned military hospital during the first and second world wars, and kept on as same afterwards by the victorious Russians. Hitler and Honecker were its most famous patients but there were plenty of others too. 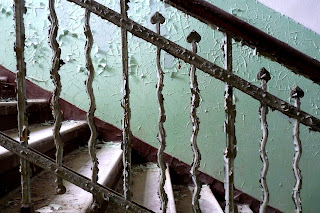 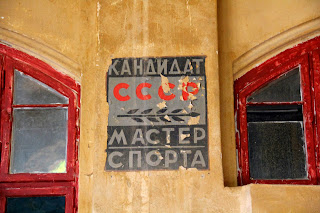 I think you used to be able to get the regional train directly from Friedrichstraße but that no longer seems to be the case as Berlin does all it can to quell the notion of it having a great public transport system. Now you have to get the Potsdam-bound S7 S-Bahn to Wannsee and then get the RE7 train from there to the conveniently-named Beelitz-Heilstätten Bahnhof. Overall the journey should take an hour from Alexanderplatz. Apart from its name, you’ll know you’re on the right track when you arrive at the train station – it too is derelict.
When you leave the station, turn left from the direction the train was travelling and you’ll find the main remains of the old complex soon enough. As always, here’s a map to assist you.
When you get done with all the stuff to the left of the tracks, there’s more on the other side! 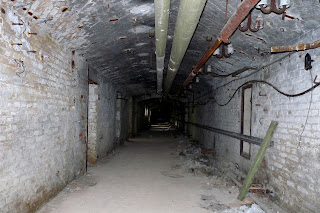 Well, this is the thing. Some of the buildings are ridiculously easy to get into, with doors open practically inviting you to enter, while others are securely boarded up and locked making entry very tricky indeed. Most of the locked-up buildings (and better preserved ones) are to the left of the main road. The ones to the right were no challenge at all, apart from the flies. 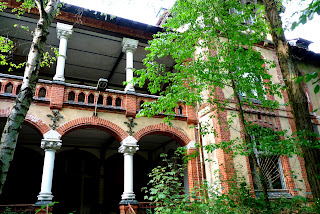 Of course, it’s always the locked buildings that are the most tempting to enter. Why is it locked up? Imagine the treasures inside! So use your discretion. You’re not going to get into all the buildings, but you’ll probably see enough for a satisfactory outing.
I crawled around the drainage tunnels under one building hoping to find a way in, only to emerge in another building I’d already explored. On another two occasions I’d to get in through windows, first by balancing on a metal beam over three metre drop, and then by climbing boarding and squeezing in through a gap on top. It’s worth it though. Just make sure if you’re climbing in somewhere, that you’ll be able to climb out again. It’s good, but it ain’t that good. 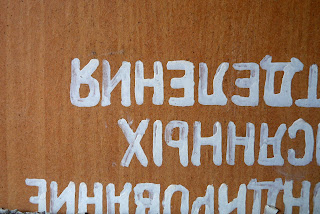 When to go
Go early in the day, giving yourself plenty of time and daylight to explore. It’s not really the place to come for parties at night though of course there’s nothing stopping you from doing so if you have a mind to. 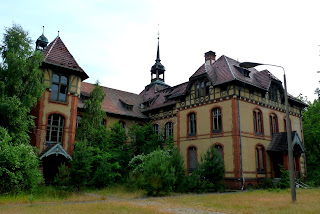 5/10. Getting here is piss easy, getting into some of the buildings easier still, but some of those buildings are stubbornly difficult to get into – if not impossible without actually breaking and entering (very much illegal and in no way encouraged) – which jacks up the difficulty rating a little bit. 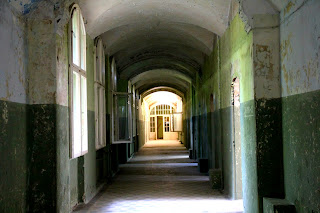 Yes, this can be a romantic adventure for those of a romantic nature so certainly bring your wives, girlfriends, husbands, boyfriends along. Fuck it, bring them all at the same time! But it’s certainly a good idea to bring someone along to call for help if you get stuck in a tunnel or a roof collapses on your head.

What to bring
Dirty clothes. Do not wear your Sunday best or (as I did) new shoes (the only pair of shoes I had that did not make me feel like a tramp when I met real humans). But definitely bring dirty clothes. It’s worth it. 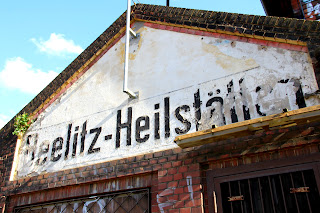 As usual, bring a camera, a couple of beers and something to eat. There are no shops in Beelitz-Heilstätten so you have to bring your own supplies if you want to avoid going thirsty/hungry. And don’t forget – as I always do – to bring a torch. Scrabbling around in tunnels in the dark may sound like fun but, well, maybe it doesn’t sound like much fun now that I think about it.

Dangers
Again, like in most of these places, some of the buildings are in a sorry state, and you don’t want them falling on you. Again, use your discretion. If a building looks like it might collapse it means it might collapse. Be fucking careful. As always, be on the look out for wardens, security guards, Polizei and that sort of thing.

Disclaimer – The person referred to as “I” in this post is not necessarily me, nor does “I” refer to anyone in particular, but is rather the letter that comes after H in the Roman alphabet. Its appearance throughout this post is probably coincidental. In fact, I, like this sentence, may not exist at all.

For more reading on Beelitz-Heilstätten (and there’s plenty) Ian Hawkins, an Englishman abroad, shared his thoughts and a little more history, including the chilling story of the “Beast of Beelitz”, in a very nice post here: http://yearinberlin.com/2012/05/21/breaking-into-beelitz/ 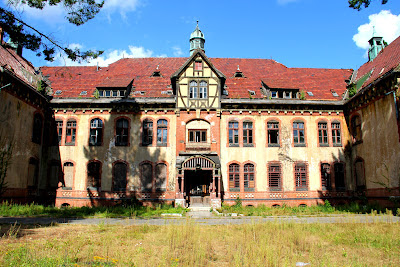