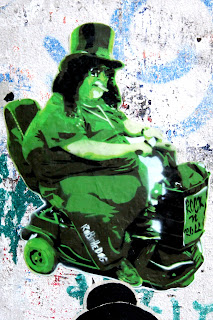 They were out in force this morning. ‘Twas a beautiful sunny day, one of summer’s parting gifts, and they were out to make the most of it.
I had to buy domestic shit and there they all were, hordes of them, all sitting outside the shopping centre basking in the sunlight surrounded by their various contraptions and aides, zimmer-frames, crutches, drips, colostomy pants, oxygen tents...
The café inside the shopping centre had tables laid out outside, complemented by metal piss-proof chairs, and it was in these chairs that they were lodged, wedged in as if dropped from a height.
They were all invariably short and round, as wide as they were tall, and the reason for their girth was staring them in the face. They returned its stare with beady eyes as they devoured it.
For each and every one of them was tucking into great slabs of Kuchen, shovelling it into gaping rancid mouths that clamped shut after each forkful and reopened for the next. I don’t think there was any chewing. The cake simply dropped down the hatch and was instantly consumed, absorbed by bodies honed to cake-eating perfection from decades of practice.
I couldn’t look for long, but I presume there was Kaffee nearby. Kaffee und Kuchen are a fixture in Germany for any special occasion and any occasion that isn’t a special one and any occasion that fails to fall into either category. 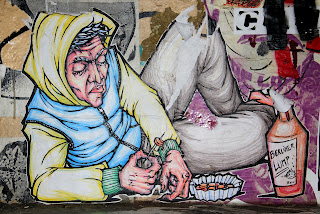 When I came back out with my domestic quarry I saw another oul’ wan sitting before a mountain of ice-cream – enough I’d say to satisfy five regular humans – with her gob open in anticipation of the shovelful making slow but inexorable progress towards it.
She shot me a dirty look, as if offended by the disgust I evidently failed to conceal, so I left her to it – this trailblazer unafraid to make a break from the Kaffee und Kuchen brigade in search of ever bigger kicks.
I guess this is as good as it gets for them – Kaffee, Kuchen und Eis – so damnit, they should be left to their fix if there’s nothing else, if this is all they’ve left from life before occupying their round coffins. But Jaysus, there must be something else.
Labels: Kaffee und Kuchen Life Süßigkeiten