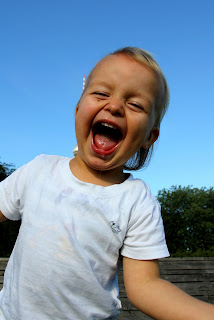 Jaysus, where does the time go? He’s clocking up the quarters like a bum* on a San Francisco street corner. He’ll be 1¾ next month. For now though, he’s one and two turds!
Coincidentally, today was also the day he discovered his shadow. I missed the main show, but Jenny recounted that he looked at the ground, freaked out, ran around in circles, looked at the ground again, freaked out again, ran around and so on until she figured out what was ailing him. He repeated the performance for my benefit upstairs. I told him he’d better make friends with his shadow because it’d be following him from now on. The poor fella. I guess if I’d a shadow like his I’d be freaked out too.
Every day there’s something. Not everything produces such a reaction of course, but there’s no end to the excitement.
We’re evidently crap parents because he loves going to Kita every day and hates coming home. Even if he’s been there for hours he won’t want to come home. Maybe if we weren’t still living in Pankow...
I think German is poisoning his mind. He runs around shouting “nein!” indiscriminately, much like the locals do. And people try to shake his hand already, trying to mould him so he’s a good little German. As soon as he’s old enough I’ll teach him to pick his nose when he meets people. That’ll put the breaks on. Mind you, he does that already and that doesn’t stop them... 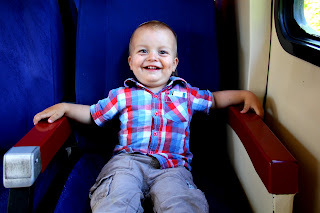 So I’m bringing him to Ireland next month for a bit of renascence. Just for a few days but I hope it’ll be enough. And we might get to go to his first match, Ireland vs. Germany at Lansdowne Road! Of course he’ll be wearing his Ireland top. Jaysus, the way Ireland are playing these days he might even get a game for them. He likes nothing better than kicking the oul’ ball around. 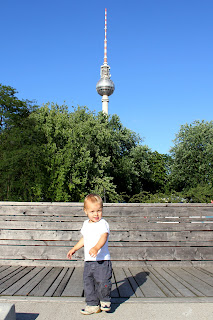 At least he won’t look as much like a German anymore. The 1980s mullet is gone! Jenny insisted on it and cut his hair last Sunday, thankfully. I’d actually been the one against it, refusing to believe that nature could be so cruel. Jenny couldn’t take it anymore and cut the overhanging tufts behind the ears. There’s no stoppin’ him now.
There really isn’t. He runs around like mad, jumps with gusto, balances himself while walking atop walls, kamikaze stuff, and he pays no attention whatsoever to anything he’s told.
“He’s cheeky as fuck,” Jenny said.
He must be driving the poor woman downstairs berserk with the football, when he’s opening and banging doors, when he drags chairs across the floor so he can reach the lock with the keys. Yes, he loves keys and locks and figuring out how to pick them. Another useful talent is burgeoning.
We have to watch him so he doesn’t climb onto the toilet and out the bathroom window. That would be the end of him. But I’m both proud and fearful to say he’s irrepressible. 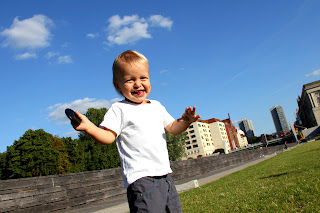 Of course, you have to draw the line somewhere. But when we do there’s trouble, drama and hysterics only exacerbated when he throws his body backwards and hits his head off the floor. He loves jumping from the frying pan into the fire.
But it’s not all bad. He’s anxious to learn, to further himself at a breakneck rate. If he keeps it up he’ll be running this country by the time he’s 25. He insists on using a knife and fork even as I eat with my hands, won’t drink from plastic beakers anymore – they have to be glass – and he’s a great man for the wooden puzzles. He has them cracked before I do.
He celebrates his (many) fine achievements by giving himself a rousing applause. We always join in. Tonight, we applaud him again. Keep it up little man, you’re doing just great.

*The original post was amended to change “hobo” to “bum” after further research revealed that hobos are traditionally wandering migrants or vagabonds picking up work wherever they can, while a bum is someone who avoids work at all costs. A tramp, incidentally, only works when he has to. I should have known all this already; Berlin is full of hobos, bums and tramps. 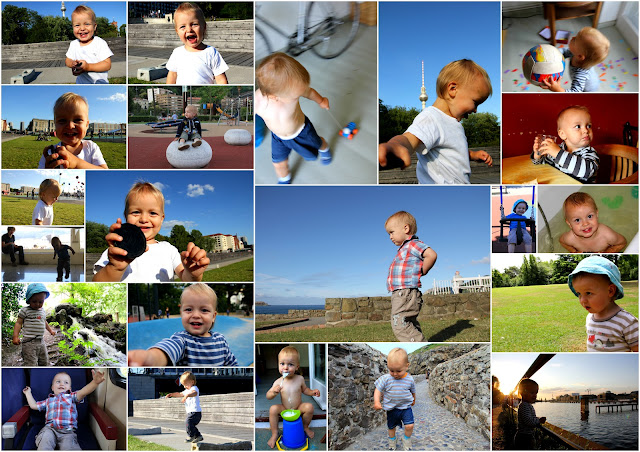