Sacred Kleingärten are sacred no longer 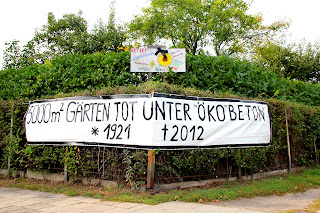 Berlin’s sacred cows are sacred no longer. Eighteen of the city’s Kleingärten in Pankow are to be dug up, uprooted and paved over with cement so apartments can be built in their wake. It’s just the latest example of the city going to the dogs - the dogs of greed, speculation, corruption and profit at all costs.
Deutsche Bahn are the main culprits for the loss of these garden allotments at Brehmestraße/Heynstraße – garden plots which had been lovingly tended by their respective owners since 1921 – but of course the courts, politicians and property sharks are also culpable for rejecting a petition which gathered 18,000 signatures against the development. 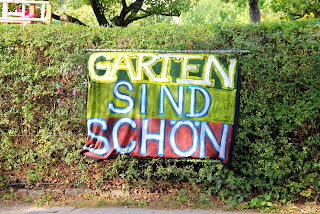 Deutsche Bahn, which was given the land by the City of Berlin in the first place, scrapped the rental agreements with the garden tenants and sold the land to a joint building venture called Himmel & Erde, whose so-called “Ökoprojekt” entails the construction of 72 apartments once the gardeners are kicked out.
And they will be kicked out, don’t worry. Despite the vigils they hold every Monday at 6 p.m. in front of their gardens. They have until the end of October to water their flowers, tend to their veg, share loving last moments with their trees... 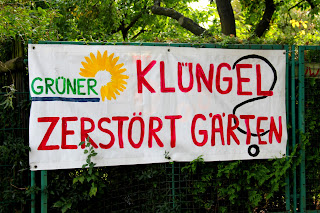 Then the bulldozers are moving in. After all, as of September 13th, all but three of the 72 apartments have been snapped up. Those behind the Himmel & Erde venture will rake in a cool €21 million altogether. That’s a fucking lucrative Ökoprojekt. Of course, not all of this is sheer profit. No doubt there are expenses, wages and bribes to be paid out too.
Beyond the obvious ecological benefits Kleingärten bring to a city, they were once deemed vital to the survival of its inhabitants. Even to this day, a Kleingartener will have to grow vegetables in his or her Garten according to long-standing conditions originally enforced to ensure the city was self-sufficient in times of war. 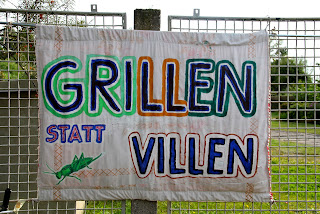 (I was aghast when I heard about this first – that a person couldn’t grow whatever the hell they wanted in their own damn garden – but I learned the reasoning behind it last week and am increasingly seeing the benefit of being self-sufficient in times of war [and peace for that matter].)
Apparently that’s no longer important and now Berlin’s 70,000 Kleingärten are all under threat.
These are different times of war after all, and the enemy is within, rich and powerful.
Labels: Berlin bureaucracy capitalism corruption politics shady shit