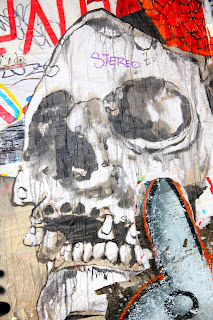 At the site of the Kleingärten mentioned in the previous post I discovered a wonderful notice on the subject of gentrification. A call to arms. I've translated it for your benefit below.

Enough.
A phantom is haunting Berlin – the phantom of Gentrification.
It’s spreading a contagious disease, cementitis, combined with an insatiable hunger for profit! Anything that cannot be protected and defended becomes its victim.
Tenants who can no longer pay the high rents, recreational facilities for the elderly, diverse cultural institutions, important green and open spaces for the locals, even 100-year-old garden allotments of great ecological and social value are to be flattened - mercilessly!!! The fate of a large part of the KGA "Famos" association in Pankow is quite tragic. This was fought with particular intensity and creativeness by many supporters for a long time – all in vain. Betrayed by those responsible. 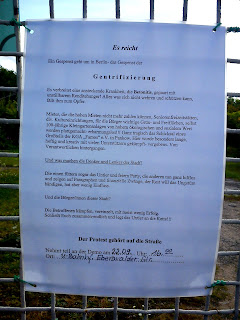 And what are the thinkers and leaders* of the city doing?
Some even feed the beast and party, others are completely helpless and point to paragraphs and financial constraints, the rest want to tame the monster but have little influence.
And the inhabitants of this city?
Those affected fight, occasionally, mostly with little success.
Come together and finally bring this beast under control!!!
The protest belongs on the street.

Then there are details of the demo which happened earlier today so there’s no point in me repeating them here, but this is an ongoing battle and I’m sure there’ll be plenty more. Gentrifizierung is as much a part of Berlin as the people it’s pushing out.