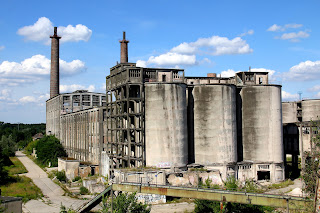 The chimney poked up innocuously through the trees as I cycled past. Oh ho! What’s this? I cycled back up the path, excitement building as more chimneys presented themselves one by one, and I literally gasped when I saw what lay before my eyes: This → 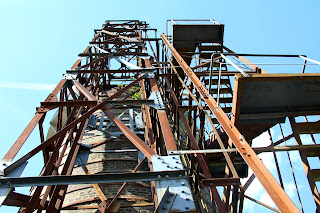 OK, you’ll have seen the picture already so perhaps the element of surprise was ruined, but still, pretty fucking amazing. It stretched out below me in majestic decadent glory and I just gazed down, mouth probably open, goosebumps on my arms and legs as I surveyed the sheer giganticism of it, the bulk, the improbability, the stillness, like something from another world. You just never know what’s around the corner in this country. 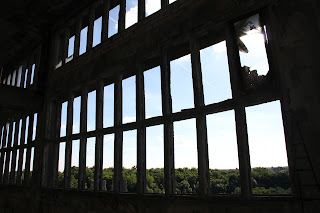 I locked up the bike, not that there was anyone to rob it, and proceeded past the chimneys, hurriedly taking my time – I didn’t want to miss anything on the way yet couldn’t wait to get down to explore the wonders of the colossus waiting for me below. 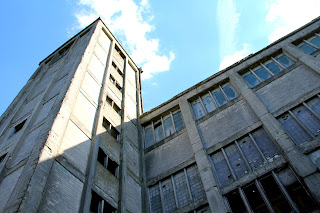 I’d stumbled upon the abandoned chemical factory of Rüdersdorf (actually in Tasdorf) which was once part of VEB Chemiewerk Coswig, responsible mainly for the production of the animal feed Rükana and other phosphates used for farming. 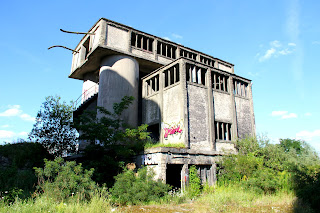 It started life in 1899 as a cement factory operated by C.O.Wegener, which allegedly made the cement in “an ultra-modern yet highly dangerous” kiln oven. The huge Preußag concern (now the TUI travel agent) took over in 1939, producing bauxite vital for the Nazis’ war effort from 1944. 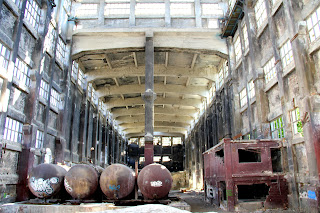 The Russians dismantled the plant after the war, but it found a new lease of life in 1950 when the VEB Glühphosphatwerk Rüdersdorf was formed to make the afore-mentioned phosphates. Two more kilns were added in 1972, and the factory came under control of the Piesteritz-based VEB Kombinat Agrochemie (agrochemicals) at the end of the 1970s. 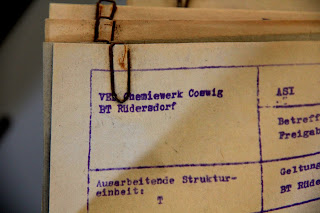 German reunification spelled the end for VEB Chemiewerk Coswig, however, as it did for so many East German enterprises, with dwindling sales and dodgy dealings from investors preceding the inevitable. The factory made its last pig’s dinner before the gates were permanently closed in 1999. 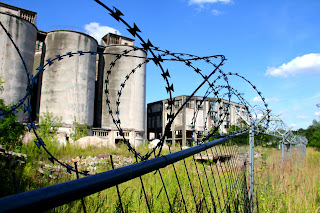 Fencing topped with razor-wire surrounds the site now but don’t let that put you off. Sure a little bit of razor-wire never harmed anyone. 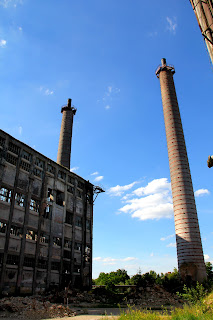 Descending past the chimneys (which I later learned were chalk ovens in the unrelated Museumpark into which you’re supposed to pay), I found a gap in the fence to the train tracks, with another convenient gap under the razor-wire and into the site. I was in!
An unsettling humming noise presides over the area, presumably from a neighbouring factory still in use, but that just adds to the spooky ambience. 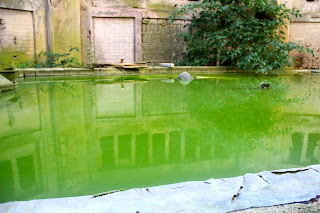 Wildlife abounds in the absence of humans, birds making the most of all the lofty perches, while frogs, tadpoles and a snake(!) had made themselves at home in a murky green pool.
There are other murky pools with black evil-looking shit and no wildlife at all, not even of the six-eyed variety. Toxic reminders of the past. 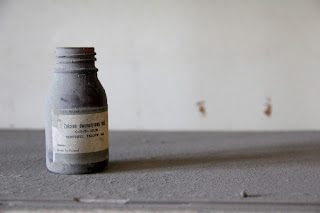 The buildings are immense. I got dizzy just walking into one with huge round concrete canisters which swallowed me up. There are holes everywhere so you really need to watch your step. This is not a place to come if you’re drunk or planning on getting drunk. One wrong step and it could be your last. 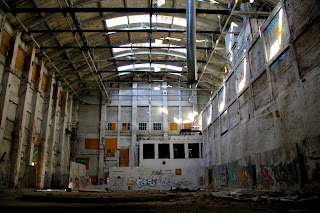 To add to the excitement, the buildings are crumbling too, and concrete dust covers the ground beside the soaring walls. I hope they’re still sound. If you hear creaking, run like fuck! 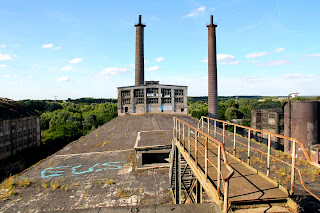 Against my better judgement, I ascended the stairs without walls up, and up, and up, and up outside the canisters, my vertigo getting more intense, my grip tighter and my beating heart louder the higher I climbed, until finally I reached the summit and could pause to let the waves of dizziness wash over me. I swayed as I surveyed the ruins around me. Then I sat down. Safer. 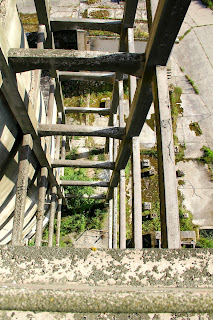 I didn’t dare go out onto the roof of the main building. You can see it’s broken in places and one footstep could send the whole damn thing crashing down.
In one of the buildings to the east of the site, there are still stacks of old papers, delivery notes, letters and so on, as well as wrecked furniture and discarded containers littering the floor, some no doubt still holding their evil potions. 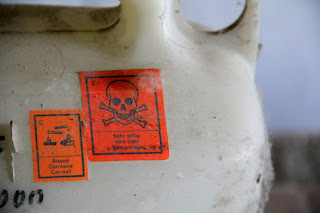 The skull and crossbones were clearly visible on some containers, so pirates must have once called this place home. Maybe they’re still there. Arrr, here be a fine place to drop anchor.
I didn’t see any pirates, nor any humans at all, so the only feasible conclusion is that the frogs I met were actually humans frogified from inhaling the various unknown gases and chemicals permeating throughout the site.
It’s incredible, but perhaps it’s best not to hang around for too long. 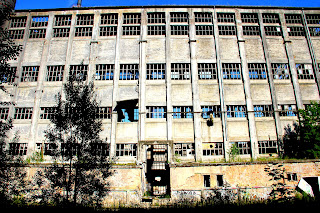 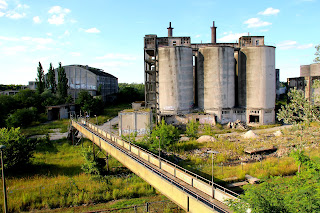 What
Abandoned chemical factory which began life as a cement factory, then made bauxite during the war, before its raison d’être became the production of animal feed phosphates and other things as part of VEB Chemiewerk Coswig, one of those GDR companies. 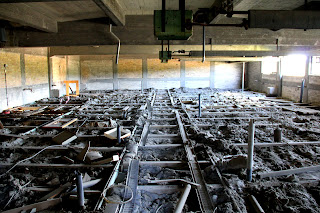 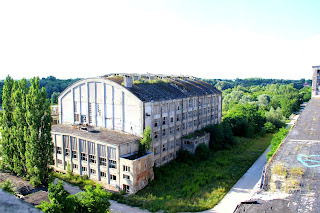 Get the train from Alexanderplatz to Erkner, the S3 or the faster regional train, the RE1 towards Frankfurt (Oder). From the Bahnhof, cycle in a northeasterly direction towards Rüdersdorf, specifically the Museumspark Rüdersdorf at Heinitzstraße 41, 15562 Rüdersdorf. The gate was open so I didn’t have to pay. Just follow the path on the left until you spot a few innocent-looking chimneys poking from the trees. You’ll find the factory laid out before you then. Here’s where it is on a map.
Otherwise, if you get caught and they’re looking for money, you can approach from the other side by cycling to Tasdorf via Ernst-Thalmann-Straße, turn right onto Berliner Straße in the village, and then take the second right onto Gutenbergstraße back down towards the factory. You’ll have to hop the gate. 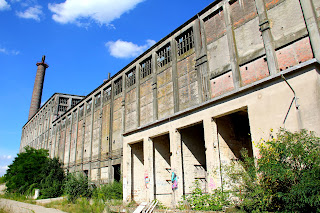 It’s a good cycle, 7.4 km each way (longer if you take the second route) but it’s worth it. If you’re lazy you can get the 951 bus from S-Bahnhof Fredersdorf to Rüdersdorf, Tasdorf and walk from there. 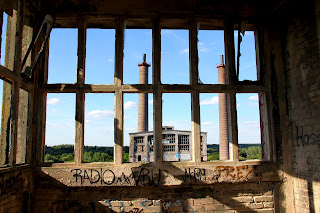 If you go the first route, through Museumspark Rüdersdorf, you’ll find a gap in the fence over the train tracks and another corresponding gap in the fence on the other side, rendering all that nasty-looking razor wire pretty much useless, unless it’s to stop pigeons from resting their weary wings by sitting on the fence. Those pigeons can never make up their minds.

When to go
I recommend daytime to minimise the risk of being killed by walking off an eight-story building, or tripping into a huge deep hole or a pit of foul leftover chemicals. Seriously, there are quite a number of pitfalls, no pun intended. 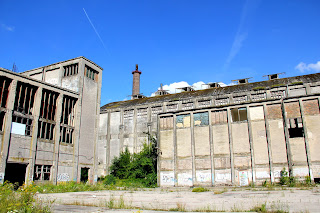 Difficulty rating
5/10. Getting here is a bit of a chore, getting in is easy once you find the gaps in the fence and apart from that there shouldn’t be any problems. No security as far as I could see. 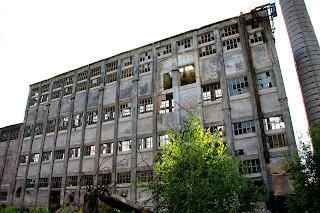 If your boyfriend/girlfriend isn’t terrified of heights you could bring them for a romantic view across the treetops and industrial areas of Rüdersdorf, Tasdorf and beyond. It’s probably a good idea to bring someone though, in case one of you falls into a hole/off a building/gets trapped under a collapsing roof.

What to bring
A helmet won’t save you if the roof does collapse so don’t bother with that. As always, a camera, couple of beers and a sandwich or something for nourishment. I was pretty thirsty after all that cycling so maybe a bottle of water wouldn’t go amiss either. And a torch is useful for exploring dark rooms and cellars.

Dangers
The buildings themselves are pretty dangerous, either from the point of view of them falling on you or you falling off them. Falling seems to be the main danger all round really. As always, watch out for nosey busybodies, Polizei, and anyone else out to spoil the fun. 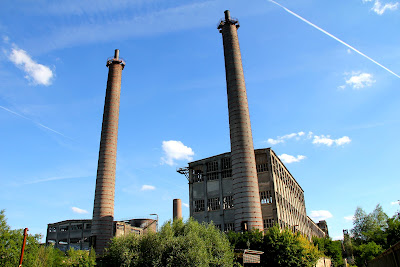