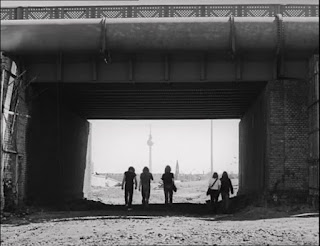 There’s been a slight negative whiff from the oul’ blog for the last while so it’s time for something positive*. This is fucking great. Thanks to Siobhán Dowling and Hilda Hoy for bringing it to my attention. A film shot in Prenzlauer Berg, East Berlin, with echte Berliners outlining their fears, hopes and musings in the months after the Wall fell, before reunification.
It was a time when Berlin was on the crest of a wave, unbridled excitement, before Prenzlauer Berg was take over by coffee shops, yoga salons, frozen yoghurt parlours, handbag boutiques, prams and Kitas – before the wave broke and gentrification came crashing down.

*Albeit in the past. This is when I should have moved to Berlin instead of  dilly-dallying with education and all that carry on.