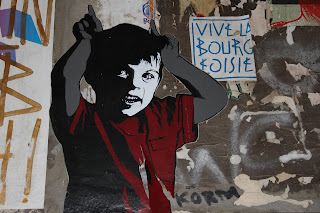 Mauerpark is fucking brilliant as everyone knows, but apparently you can have too much fun here. The Spaß Polizei were on hand to control the dangerously high levels of happiness today.
Evidently the alarm was raised when they heard Joe Hatchiban was entertaining the masses with his all-conquering karaoke, fleas were flagrantly selling their wares in the market, and people from all countries, some stranger than this one, were kicking back, relaxing and basking in the joys of Berlin in summer (when the sun shines).
I spotted them watching beadily from the perimeter. The fun police, that is, not the people. The people were everywhere.
It wasn’t long before they came over, at first I thought because the nip was running around and cavorting like a lunatic, but no – to ask if we owned the unfortunate one-eyed dog who was minding his own business beside us.
We didn’t, but the dog’s owner made himself known and the skinnier cop – the one who could probably still fit behind his desk – lectured him about having the poor animal on a lead. 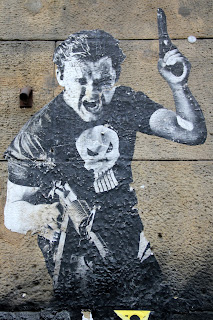 Now this dog was the probably the most timid, quiet being in the whole damn park at this stage, literally just sitting there and turning his head from time to time to take in some of the madness around him. Well, he carried on with his observations after he’d been duly shackled by a lead.
Perhaps the police thought he’d lost his eye in a knife fight and they didn’t want to take any chances.
They wandered on having earned their taxpayers’ money for bringing this savage beast of a dog under control and we forgot about them until they turned up again later, this time as we were listening to Silvio Talamo, a “cosmic vocalist” from Italy who was playing some mad stuff, hilarious, absolutely brilliant.
We only heard one song, cheered appropriately, before the fucking Spaß Polizei showed up and told him to play no more. Maybe he needed a permit, a form stamped by the Bürgeramt and 20 other stampers and fee collectors of officialdom.
“I’ve to stop. I love you!” Silvio told his new-found fans and that was that. Bah. If there’s one thing Mauerpark doesn’t need on a Sunday, it’s the Spaß Polizei.
Labels: Bad service beer Berlin bureaucracy Bürgeramt Mauerpark party police street art